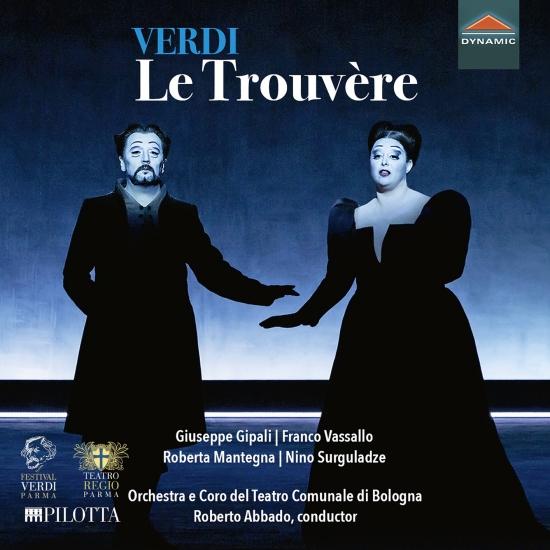 After the great success that Il Trovatore received in Paris, Verdi was proposed to compose a French version of the opera to suit the tastes of the local public. The original work, based on the Spanish play El trovador by Antonio García Gutiérrez, had a libretto by Cammarano, which was translated into French by Émilien Pacini . Le Trouvère was first staged in Brussels in 1856 and premiered at the Paris Opera in 1857. In this new version the composer added some music in act 3 for the gypsie ballet scene, extended the finale of act 4 and made several other revisions. The plot is highly dramatic and captivating: Verdi portrays strong characters who deal with war, obsession and revenge. To use director Robert Wilson’s words “this is a family tragedy, and in many ways, it is a very contemporary story.” Wilson’s approach to the opera aims at preserving its emotional strength by using a very essential décor, whose main element is light: “As a director, when I design the stage and lighting, I think about if what I see can help me hear better. Le Trouvère requires a tremendous amount of concentration, so the set I designed is abstract in order to create a space for the music in the Farnese. I have designed an environment in concrete, creating a juxtaposition to the theatre’s ornate interior. […] Light in my work functions as part of the architectural whole. It is an element which helps us hear and see. Without light there is no space. To light a world that Verdi has described as so dark, one needs light to make the space darker.” In the set’s background the director also uses some photos by American photographer Robert Rosenkranz. This production was staged in the splendid Teatro Farnese of Parma, which was built in 1628 and belongs to the Complesso Monumentale della Pilotta, one of the oldest museums in Italy. Extra content: Interview with the curator of the Museum subtitled in all languages.
Giuseppe Gipali, tenor (Manrique)
Franco Vassallo, baritone (Comte de Luna)
Roberta Mantegna, soprano (Léonore)
Nino Surguladze, mezzo-soprano (Azucena)
Orchestra e Coro del Teatro Regio di Parma
Roberto Abbado, conductor
Robert Wilson, direction 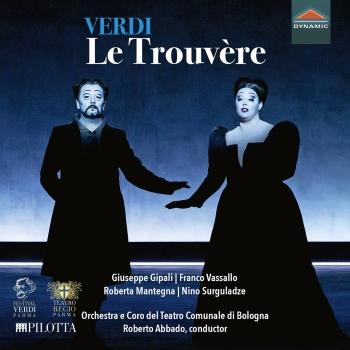 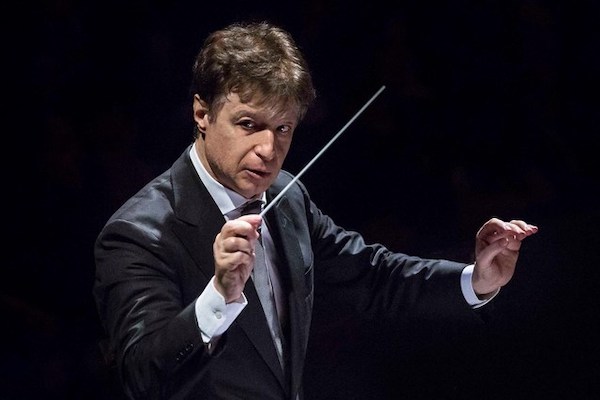 Roberto Abbado
awarded the prestigious “Premio Abbiati” by the Italian Music Critics Association for his “accomplished interpretative maturity, the extent and the peculiarity of a repertoire where he has offered remarkable results through an intense season”, is Musical Director of Parma’s Festival Verdi. He studied orchestra conducting under Franco Ferrara at the Teatro La Fenice in Venice and at the Accademia Nazionale di Santa Cecilia in Rome, where he was invited – the only student in the history of the Academy – to lead the Orchestra di Santa Cecilia. He made his debut in the United States in 1991 in New York conducting the St. Luke’s Orchestra. Since then he has returned regularly to the US to lead the Symphonic Orchestras of the cities of Boston, Philadelphia, Chicago, Cleveland, San Francisco, as well as the Los Angeles Philharmonic, the Saint Paul Chamber Orchestra – of which he is one of the “Artistic Partners” –working with soloists like Yo-Yo Ma, Midori, Nigel Kennedy, Gil Shaham, Joshua Bell, Hilary Hahn, Vadim Repin, Sarah Chang, Yefim Bronfman, Mitsuko Uchida, Alfred Brendel, Radu Lupu, André Watts, Andras Schiff, Lang-Lang, and Katia and Marielle Labèque.
He was Musical Director of the Münchner Rundfunkorchester from 1991 to 1998, completing seven album recordings with the orchestra, and of the Palau de les Arts Reina Sofía in Valencia from 2015 to 2019. He has worked with many ensembles, including Amsterdam’s Concertgebouworkest, the Wiener Symphoniker, the Orchestre national de France, the Orchestre de Paris, the Staatskapelle Dresden, the Gewandhausorchester (Leipzig), the NDR Sinfonieorchester (Hamburg), the Sveriges Radios Symfoniorkester (Stockholm), the Israel Philharmonic Orchestra, the Orchestra di Santa Cecilia, the Orchestra del Maggio Musicale Fiorentino, the Orchestra Sinfonica Nazionale della Rai, the Filarmonica della Scala, the Orchestra of Teatro Comunale di Bologna, the Atlanta Symphony Orchestra, the Cincinnati Symphony Orchestra, the New World Symphony Orchestra, the Minnesota Orchestra, the Malaysian Philharmonic Orchestra and the Taipei Symphony Orchestra.
Roberto Abbado has conducted numerous world premieres and new opera productions, including Fedora and Ernani at the Metropolitan Opera House in New York; I vespri sicilianiat the Wiener Staatsoper; La Gioconda, Lucia di Lammermoor, La donna del lago, and the world premiere of Fabio Vacchi’s Teneke at La Scala; L’amour des trois oranges, Aida, and La traviata at the Bayerische Staatsoper; Le Comte Ory, Attila, I Lombardi alla prima crociata, Il barbiere di Siviglia, Henze’s Phaedra– at its Italian premiere – and Anna Bolena at the Maggio Musicale Fiorentino; Don Giovanni at the Deutsche Oper Berlin; Simon Boccanegra, and La clemenza di Tito at the Teatro Regio of Turin; La donna del lago at the Opéra Garnier in Paris; Ermione, Zelmira, and Mosè in Egitto at the Rossini Opera Festival; the Italian premiere of Marschner’s Der Vampyr at the Teatro Comunale in Bologna.
A passionate interpreter of contemporary music, Abbado’s repertoire includes composers like Luciano Berio, Bruno Maderna, Goffredo Petrassi, Sylvano Bussotti, Niccolò Castiglioni, Azio Corghi, Ivan Fedele, Luca Francesconi, Giorgio Battistelli, Michele dall’Ongaro, Giacomo Manzoni, Salvatore Sciarrino, Fabio Vacchi, Pascal Dusapin, Henri Dutilleux, Olivier Messiaen, Alfred Schnittke, Hans Werner Henze, Helmut Lachenmann, John Adams, Ned Rorem, Christopher Rouse, Steven Stucky, and Charles Wuorinen. ...