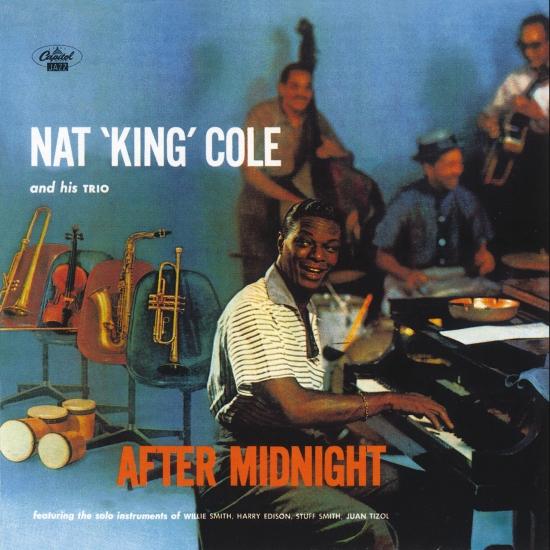 Nat returned to the piano and the sound of his great '40s trio for this 1956 gem, here augmented by five additional tracks and one alternate take! Violinist Stuff Smith, alto saxophonist Willie Smith and trombonist Juan Tizol are featured on four songs each, while trumpeter Harry 'Sweets' Edison stars on five tunes, including mellow, late-night remakes of Sweet Lorraine; Route 66 , and It's Only a Paper Moon.
„Once Nat King Cole gave up playing piano on a regular basis and instead focused on a series of easy listening vocal albums, jazz fans longed for him to return to his first love. These 1956 studio sessions made up Cole's last jazz-oriented disc, where he played piano and sang on every number, joined by several guest soloists. Cole's vocals are impeccable and swinging, while his piano alternates between providing subdued backgrounds and light solos that don't reveal his true potential on the instrument. Willie Smith's smooth alto sax buoys the singer in the brisk take of 'Just You, Just Me.' Harry 'Sweets' Edison's muted trumpet complements the leader in his interpretation of 'Sweet Lorraine.' Composer Juan Tizol's valve trombone and former Cole sideman Jack Costanzo's bongos add just the right touch to the brisk take of 'Caravan.' Stuff Smith's humorous, unusually understated violin is a nice touch in 'When I Grow Too Old to Dream.' It's hard for any Nat King Cole fan to ignore these important sessions.“ (Ken Dryden, AMG)
'...this is classy music for mellow hours, before or after midnight.' (JazzTimes)
Nat King Cole, piano, vocals
John Collins, guitar
Charlie Harris, bass
Lee Young, drums
Willie Smith, alto saxophone
Harry Edison, trumpet
Juan Tizol, trombone
Jack Costanzo, bongos
Recorded at Capitol Studios, Los Angeles, California between August 15 & September 24, 1956.
Digitally remastered