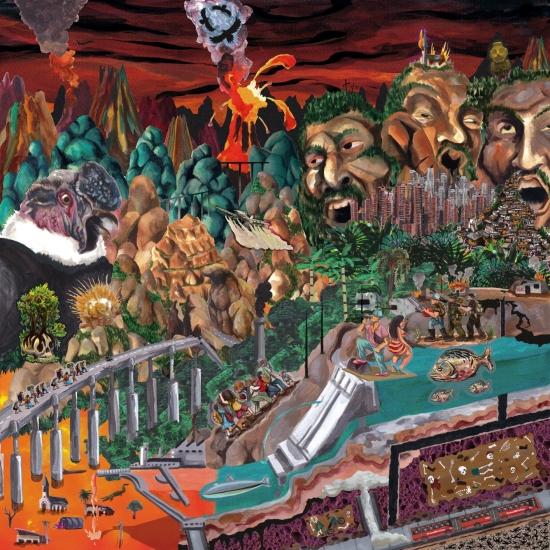 The three members of Los Pirañas can all remember when they were in high school together in Bogotá, Colombia and just beginning to play music. Back then, the joy of a riff, the heavy beat and a ripple of guitar noise were all they needed to make life worthwhile. Twenty-five years on and they’ve become internationally well-known musicians, spread across different bands, traversing multiple continents. But together as Los Pirañas they’re about to release Historia Natural, their third album, recapturing the spirit that moved them as teenagers. Yet it’s a record that’s anything but basic. That youthful desire has been filtered through the prism of knowledge and time. Now it’s fuelled by a wily sophistication in the sound, and a deep, ingrained understanding of the rhythms that power their homeland. It’s innocence plus experience.
“To me, this album is going back to where we were in high school,” says drummer Pedro Ojeda, also known for his work in Romperayo. “We didn’t have so many goals back then. We wanted to play riffs, to express ourselves, to find that rough spirit.”
“We’re looking back, but with all this experience,” agrees guitarist Eblis Alvarez, who’s been part of the Meridian Brothers for two decades. “We were too much in a comfort zone, we were getting lazy about what to do next. So we talked and came up with some concepts. The three of us have a soul bond and a long history together.”
Although they’d played music together when young, Los Pirañas only came into being as a band 10 years ago. It gave them the chance to explore the complex vitality of Colombian rhythms mixed with Alvarez’s unique blend of computer and guitar. A combination of past and future, and a power trio unlike any other.
“There’s a huge Colombia repertoire of recordings that have influenced us,” Ojeda explains. “As a drummer, those rhythms have been my main inspiration. I try to get the feeling and the energy of those discs from the 1950s to the ‘70s in what I do with the band.”
Their debut release as Los Pirañas showcased the joys of “the trio format that was new to us,” while the band’s second release La Diversión Que Hacía Falta En Mi País came after a few years of touring. By then, Alvarez says, “we were confident in what we were doing, and more sophisticated.”
For a third outing they needed something to push them. They went searching for a nuanced naïveté and they found it, with Ojeda’s adroit drumming and the muscular bass work of Mario Galeano of Frente Cumbiero fame, providing a solid anchor for the music.
“Mario is always very clear in his playing,” Ojeda points out. “He’s never trying to show off. He doesn’t need to do that.”
Together, the pair create a mighty tropical noise that frees up Alvarez for his guitar experiments. He’s been working with computers and music for two decades, feeding his guitar through a laptop. But there’s absolutely nothing mechanical or detached about the outcome.
“For me the emotional aspect of the music is the most important,” he insists. “We don’t use the computer the way most people do; we take the opposite approach. We don’t build from a computer track. It’s physical, it’s based on what I do, and the computer jumps in. It’s designed to go off in different directions and sounds.”
What makes all this even more impressive is that Historia Natural was recorded live in the studio, just like their previous releases; working that way has become an article of faith for Los Pirañas since they formed. “The trio energy is unique,” Galeano says. “Every sound you hear on the album is us playing live. In the studio we jam and develop different takes on ideas. Much of what we do is improvised. We know each other so well that we’re very connected, the communication between us is completely natural. It’s why we don’t have to rehearse that much.”
And all through the album, Alvarez’s guitar is a shapeshifter, constantly mutating sound and texture. It rarely sounds straight up, but there’s never a doubt that someone is plucking the strings and bending the notes. Alvarez darts around and through the lines created by Ojeda and Galeano, leading or snapping at their heels. This is a band bristling with ideas, where the unspoken communication is so acute that all three of them can swerve together or turn on a dime. “Palermo’s Grunch,” for instance, is a surf trip along Colombia’s Caribbean coast powered by a vallenato rhythm that suddenly dives into deep, rippling dub, while “Rechazados Por El Mundo” carries the listener to an interstellar cumbia party zipping between the planets.
“Really, we’re just expressing ourselves the way we did when we were young,” Alvarez insists. “The difference is that we use computers and contemporary forms to fit into modern culture.” And their particular culture revolves very much around Colombia’s capital, Bogotá, where they live and where they’ve always made music.
“The scene here is very important to us,” Alvarez says. “We’re very local guys, still doing what we love. We work with small, communal labels. We tour globally, but our hearts are very much here.”
A swirling, electric universe of music, created right in their own neighbourhood. That’s the real Historia Natural of Los Pirañas.
Eblis Alvarez, electric guitar, computer
Mario Galeano, bass
Pedro Ojeda, drums, percussion