Birth of a City David Haney 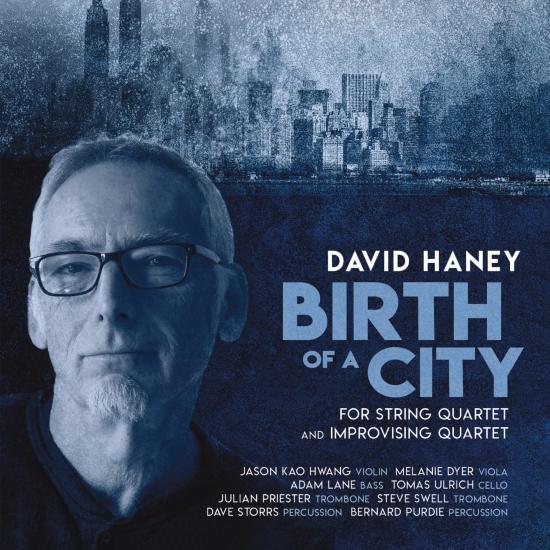 Info zu Birth of a City

Even though the tracks on BIRTH OF A CITY are loosely grouped by their titles, the recording is very much a concept album. Haney, himself an accomplished pianist who also studied composition, scored the pieces for a kind of string quartet (violin - viola - cello - double bass), interspersed by varying quantities of brass instruments and percussion. Naturally, as one would expect from this kind of music, all works are scored with exactitude – for the most part, that is. Remarkably, Haney grants the performers a great amount of improvisatory freedom – indubitably owing to his own background in jazz, the genre which definitely and definitively shines through in all his compositions.
It is for this great freedom that all tracks – not only the eponymous Birth of a City, but also the Variations on a Theme as well as Improvisations on a Theme – come across as very dynamic, organic, free-spirited, occasionally even chaotic, all contributing to the impression that this is not a sterile recording of painstakingly thought-out music, but very much a living organism of several musicians' joint forces. And it is this liveliness that rouses interest and exudes the particular charm familiar to jazz audiences.
Haney's benevolence towards his performers pays off a hundredfold. BIRTH OF A CITY is a testament to how musical thought can take and even shift shape in the hands of an ensemble, if only it is given the right amount of freedom.
“Haney’s jagged and contemplative clusters of notes, sometimes [create] a brooding, pensive mood reminiscent of a Jackson Pollock painting and other times [set] forth a forward momentum that reminds you that this music comes from that essential kernel of jazz creation: swing.” (ICE Magazine)
“Mr. Haney is a pianist drawn to experimental settings, and he creates a promising one here.” (The New York Times)
“One of the most inventive pianists in the USA...” (Bruce Lee Gallanter, Downtown Music Gallery)
“a pianist whose accomplishments far outranks his public profile...” (Peter Monaghan, Earshot Jazz)
Jason Kao Hwang, violin
Melanie Dyer, viola
Adam Lane, bass
Tomas Ulrich, cello
Julian Priester, trombone
Steve Swell, trombone
Dave Storrs, percussion
Bernard Purdie, drums, percussion
Recorded August 8 and October 23, 2018 at Kaleidoscope Sound in Union City NJ
Additional material recorded November 8, 2018 at Dave Storrs Studio in Corvalis OR 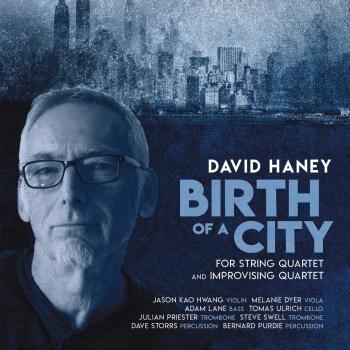 Birth of a City 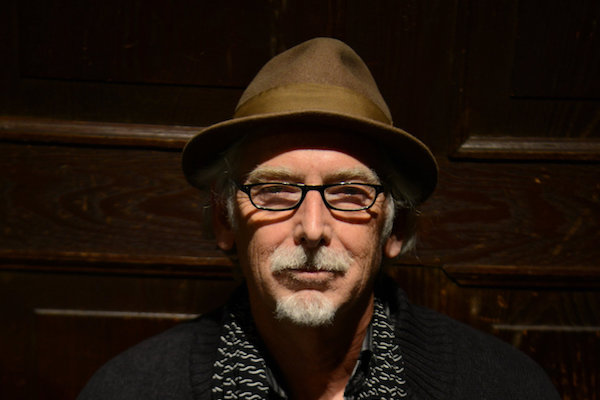 David Haney
is a remarkable pianist with a wealth of new ideas, and the ability to communicate those ideas to a wide audience. Haney studied composition for six years with the great Czech composer, Tomas Svoboda. After years of working with the Society of Oregon Composers, Haney honed his skills as a working jazz artist, often paired up with some of the greatest minds in jazz improvisation. From the famed Teatro Colon in Buenos Aires, to the Bla Jazz in Oslo, Haney has performed worldwide with such featured artists as Andrew Cyrille, Roswell Rudd, John Tchicai, Bud Shank, Bernard Purdie, Buell Neidlinger, Julian Priester, Han Bennink, Obo Addy, Wilbert de Joode, Gerry Hemingway, Wolter Weirbos, Perry Robinson, and Johannes Bauer.
Haney has recorded 14 albums in ten years for C.I.M.P. Records and Cadence Jazz Records. He has also collaborated on 14 albums on other labels such as SLAM (UK), Canada Jazz Studio, That Swan Records, NoSeSo Records, and his own labels, JazzAudioDotCom, Arctic Records, and Space Rat Records.
He has received grants and commissions for his creative work from the U.S. State Department; Alberta Film Works; and the Oregon Ballet Theatre. He was awarded a travel grant from the U.S. State Department to present the music of composer Herbie Nichols in concerts throughout Argentina and Chile. Haney's piano/trombone work Ota Benga of the Batwa was included in the critics pick for best Jazz Album of 2007 (Coda Magazine). David's recent releases "Conspiracy a go go" and "Clandestine" were were both selected Top Ten Jazz Albums of 2009 (Cadence Magazine).
Bernard Purdie
the world’s most recorded drummer, was born June 11, 1939 in Elkton, Maryland as the eleventh of fifteen children. Purdie moved to New York in 1960 after finishing high school and played with (among others), Lonnie Youngblood before landing his first hit with King Curtis. This led to his engagement with Aretha Franklin in 1970 - the beginning of an unparalleled career. Since then, Purdie has been a regular guest in the studios of the stars of Jazz, Soul, and Rock, working together with Paul Butterfield as well as Larry Coryell, Miles Davis, Hall & Oates, Al Kooper, Herbie Mann, Todd Rundgren and Cat Stevens, as well as regularly producing his own solo albums under his own name.
Adam Lane
By combining a disparate set of influences into a unique improvisational voice, Adam Lane has become recognized as one of the most original creative voices in contemporary jazz. His 2006 recording New Magical Kingdom, was recently featured in the Penguin Jazz Guide 1001 Best Records Ever Made, and his most recent recording, Ashcan Ranting received a myriad of critical praise including four stars in Downbeat.