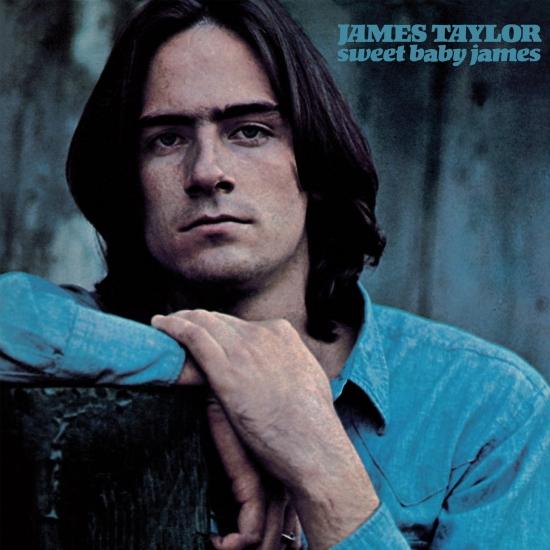 New Remaster 2019: James Taylor's second album, Sweet Baby James, released in early 1970, is the album that secured his spot among the most important songwriters of the 70s. The sweet, bluesy acoustic guitar and vocals on this album are authentic and interesting - this is a record that has everything from a blues inspired jam, packed with a big band horn section ("Steamroller Blues"); to a gospel revival-like track ("Lo And Behold"); to a traditional nursery rhyme made into a folk ballad ("Oh, Susannah"). And, of course, the album featured "Fire and Rain," which reached #3 on the Billboard Hot 100. "Country Road" was another Top 40 hit that struck a chord with music fans, especially because of its attractive mixture of folk, country, gospel, and blues elements, all of them carefully understated and distanced.
While Taylor gets help from some friends such as Carole King (piano) and future Eagles bassist Randy Meisner, its his stellar songwriting and heartfelt vocals that shot this album to #3 on the Billboard Album Charts and earned a 1971 Grammy nomination for Album of the Year. This recording launched not only Taylor's career - he's won more than 40 gold, platinum and multi-platinum awards as well as five GRAMMY® Awards and was inducted into both the Rock and Roll Hall of Fame and the Songwriters Hall of Fame - but also propelled the entire singer/songwriter movement of the early '70s that included Joni Mitchell, Carole King, Jackson Browne, Cat Stevens, and others.
"The album that launched a thousand heavy-hearted singer-songwriters on their not-so-merry way, Sweet Baby James was arguably the first shot in what became the soft revolution of the early '70s. A refugee of the Beatles' Apple label, Taylor struck commercial gold with Sweet Baby James by augmenting his acoustic guitar and soothing vocals with laid-back accompaniment (which included equally influential singer-songwriter insurrectionist Carole King on piano) and penning a slew of songs that drew upon folk, soul, and rock influences. "Fire and Rain" stands as the quintessential early Taylor tune: musically mellow and lyrically restive, it put Taylor in the Top 10 and set the tone for a popular school of '70s sound." (Steven Stolder)
"It is impossible to appreciate the music of this generation without this album... an incredible adventure of masterful songwriting."
James Taylor, guitar, vocals
Carole King, piano
Danny Kootch, guitar
Red Rhodes, steel guitar
Chris Darrow, fiddle
Russ Kunkel, drums
Bobby West, bass
John London, bass
Randy Meisner, bass
Engineered by Bill Lazerus
Produced by Peter Asher
Digitally remastered
The triple-platinum album that spawned James' first top 10 hit, the intensely personal "Fire and Rain".
Rolling Stone's 500 Greatest Albums of All Time # 104/500

One Man Band (Live At The Colonial Theatre)

James Taylor
In a career marked by artistic triumphs, the past two years for James Taylor have been notable for both creative virtuosity and recognition of exceptional achievement. In 2012, he was awarded the distinguished Chevalier of the Order of Arts and Letters by the French government and in 2011, was awarded the National Medal of Arts by President Barack Obama in a ceremony at the White House. Both medals are their nation's highest honors for artistic excellence recognizing 'outstanding achievements and support of the arts.' In 2011, Taylor was also honored with a Carnegie Hall Perspectives series, which consisted of four concert evenings presented by Carnegie Hall and featuring Taylor and personally selected musical guests. The first of these concerts was a gala benefit celebrating the 120th anniversary of Carnegie Hall. Three months after the National Medal of Arts ceremony, Taylor returned to the White House to perform for President Obama and German Chancellor Angela Merkel at a state dinner held in the Rose Garden.
James Taylor's music embodies the art of songwriting in its most personal and universal forms. He is a master at describing specific, even autobiographical situations in a way that resonates with people everywhere. For more than forty years Taylor has been a compass for his fans, articulating moments of pain and joy, and letting his listeners know that they are not alone.
As a recording and touring artist, Taylor has set a precedent to which countless young musicians have aspired. His warm baritone is among the most recognized voices in popular music and his distinctive style of guitar-playing has been enormously influential. He has sold close to 100 million albums throughout his career, beginning in 1968 when he was signed to The Beatles' Apple Records. In 1971, Taylor was featured on the cover of Time magazine, heralded as the harbinger of the singer-songwriter era. Forty years later, his voice has been a constant in a changing world for his first generation of fans and their children. His songs have had a profound influence on songwriters and music lovers from all walks of life: 'Fire and Rain', 'Country Road', 'Something in the Way She Moves', 'Mexico', 'Shower the People', 'Your Smiling Face', 'Carolina In My Mind', 'Sweet Baby James', 'Don't Let Me Be Lonely Tonight,' 'You Can Close Your Eyes,' 'Walking Man,' 'Never Die Young,' 'Shed a Little Light', 'Copperline', 'Enough to be On Your Way', 'Caroline I See You' and many more. He has earned 40 gold, platinum, and multi-platinum awards and five Grammy Awards for a catalog that runs from James Taylor (1968) and Sweet Baby James (1970) to Hourglass (1997) and October Road (2002). His first greatest hits album earned the Recording Industry Association of America's elite Diamond Award, given for sales in excess of 10 million units in the United States. For his artistic accomplishments, Taylor was honored with the 1998 Century Award, Billboard magazine's highest accolade, bestowed for distinguished creative achievement.
Taylor released his breakthrough album Sweet Baby James in 1970. It went triple-platinum and spawned his first top 10 hit, the intensely personal 'Fire and Rain.' The following year saw the release of another million-seller, Mud Slide Slim and the Blue Horizon, with the #1 single 'You've Got a Friend', written by his longtime friend Carole King. The recording won a Grammy Award in 1971 for Best Pop Male Vocal. In 1972, Taylor scored another gold album with One Man Dog, followed up in 1973 with Walking Man. The album Gorilla (1975) included two more major chart entries: 'How Sweet It Is (To Be Loved By You)' and 'Mexico'. Following his final Warner Brothers recording, In the Pocket, Taylor moved on to Columbia Records and released a string of critically praised and commercially successful albums: JT, his 1977 double-platinum Columbia debut; Flag (1979); Dad Loves His Work (1981); That's Why I'm Here (1985); Never Die Young (1988); New Moon Shine (1991); the double-disc Live album (1993); Hourglass (1998), garnering Taylor his first Grammy Award for Best Pop Album; and October Road (2002)â€”all certified platinum.
The year 2000 saw Taylor's induction into both the Rock and Roll Hall of Fame and the prestigious Songwriters Hall of Fame. The National Academy of Recording Arts and Sciences selected him as its MusiCares Person of the Year in 2006, and his One Man Band (2007) was nominated for an Emmy Award in the category of Outstanding Variety, Music, or Comedy Special. In 2008, Taylor released Covers and Other Covers that features Taylor's full band and is his own musical interpretation of tunes from the '50s, '60s and '70s. In May 2010, Taylor released the Live at the Troubadour CD/DVD of his November 2007 live performance with Carole King at the Troubadour nightclub in Los Angeles. Their subsequent Troubadour Reunion tour was one of the most successful concert tours of the decade. Most recently, Morgan Neville's acclaimed documentary, Troubadours: The Rise of the Singer-Songwriter was nominated for the Jury Prize at the 2011 Sundance Film Festival and was recently broadcast on PBS as part of its prestigious American Masters series.
James Taylor has received honorary doctorates of music from Williams College and the Berklee School of Music. Raised in North Carolina, he lives in western Massachusetts with his wife Caroline and their sons Henry and Rufus.