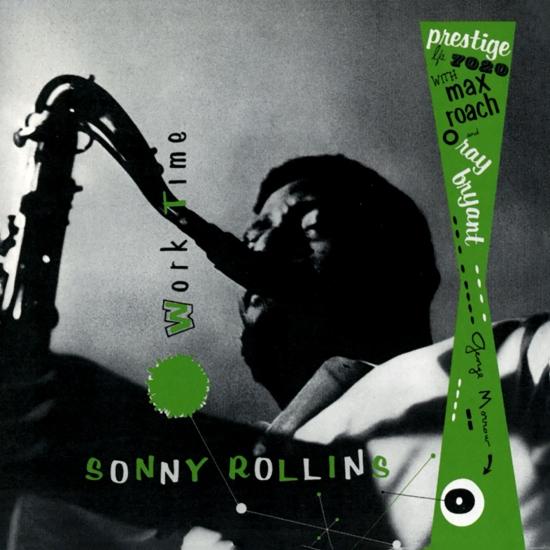 Work Time is an album by jazz saxophonist Sonny Rollins, recorded for the Prestige label, featuring performances by Rollins with Ray Bryant, George Morrow, and Max Roach.
"After he was coaxed out of seclusion in Chicago to replace Harold Land in the Clifford Brown/Max Roach quintet in 1954, this 1955 release was Sonny Rollins' first album as a leader since the conclusion of his first self-imposed sabbatical. Roach is on hand in the drummer's seat, spurring Rollins along every step of the way. Not that the tenorist needs much spurring -- he comes flying out of the gate on the opening tune, "There's No Business Like Show Business" and doesn't let up for the duration of the session. He takes his first chorus on "Show Business" with only bassist George Morrow for support, then when the drums come in, he blows ferocious double-time before giving way to Roach's extremely musical solo. Rollins and Roach also work off of each other to great effect on "Raincheck," trading fours on this imaginative selection from the from the Billy Strayhorn catalog. Even on the more relaxed tempo of "There Are Such Things," Rollins' exploration of the changes combines a classic tenor's warm breathy tone with a bebopper's determination to leave no possibility unconsidered. Pianist Ray Bryant's playing is also impeccable throughout." (AMG)
Sonny Rollins, tenor saxophone
Ray Bryant, piano
George Morrow, bass
Max Roach, drums
Recorded December 2, 1955 at Van Gelder Studio, Hackensack, New Jersey
Produced by Bob Weinstock
Digitally remastered