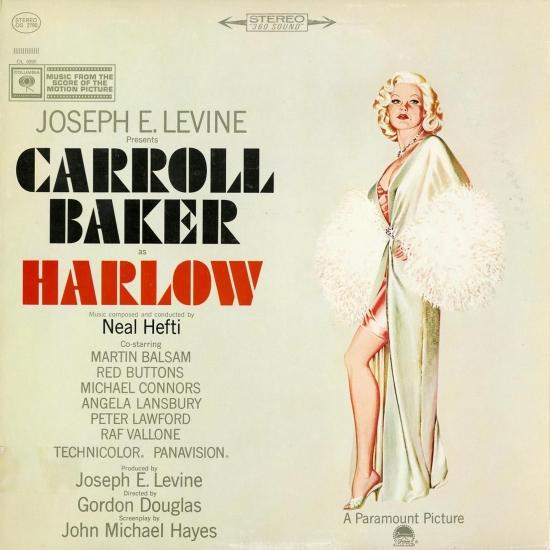 Joseph E. Levine’s production of HARLOW, a Paramount Pictures release, dramatically unfolds the fabulous legend of Jean Harlow, one of the most exciting and fascinating love goddesses ever to appear on the motion picture screen. The platinum-blonde bombshell from Kansas City, Missouri, rose to stardom in the Thirties as Hollywood’s – and the world’s – reigning sex queen.
In the nearly thirty years since her tragic death at the age of twenty-six – she was then at the peak of fame – Jean Harlow has grown into a legend. Everyone who delighted in her unique flair for comedy in more than two dozen films has wondered about her private life: What were the personal misfortunes that culminated in her untimely death in 1937? What was the real Jean Harlow like? Was her wise-cracking, brashly self-confident screen image he real Harlow? What were her warm, human qualities that only close friends knew and cherished as fond memories after her passing? What real-life roles did her family – her ambitious mother and her handsome, opportunistic stepfather = plain in her life? And how did her trusted agent-discoverer, Arthur Landau, try to protect Jean from the pressures of fame?
HARLOW searchingly dramatizes key events and personalities in Jean’s life, outside and inside the studio sound stages, in a fascinating attempt to solve the riddle of one of the entertainment world’s most beautiful, controversial women. The film introduces Jean Harlow (Carroll Baker) in the late Twenties, as Hollywood was on the brink of becoming the world’s movie capital. This was the era of which Jean herself would soon become a vital, unforgettable part. A youthful aspirant, she haunts Hollywood studios looking for a part, however small, that will carry her on the road to fame and fortune. She lives with her mother, Mama Jean Bello (Angela Landsbury), and her stepfather, Marino Bello (Raf Vallone), who plunges Jean’s earnings into shady money-making schemes. Life takes on a hopeful note when, at work on a movie set one day, she is seen by Arthur Landau (Red Buttons), a Hollywood agent.
„Jean Harlow, the 1930s sex symbol and movie star, had a tragic and scandal-filled life that included marriage to a studio executive who committed suicide and an early, mysterious death herself. When author Irving Shulman teamed with her former agent, Arthur Landau, to write the book Harlow: An Intimate Biography in the 1960s, it became a bestseller (although its more lurid speculations were debunked by later biographers). Naturally, Hollywood took an interest, and two competing film projects resulted. Director Alex Segal's Harlow, starring Carol Lynley, got out of the gate first, by way of a live television broadcast that was kinescoped and released to theaters. The supposedly more upscale version, which appeared two months later, was directed by Gordon Douglas and starred Carroll Baker. It really wasn't any better. Neal Hefti handled the score of this one (Nelson Riddle did the other), and he brought to it his usual '60s jazz-pop style, without worrying much about period accuracy. Hefti, of the same generation as Henry Mancini, similarly gave his music elements of contemporary pop and cocktail jazz that included electric and acoustic guitars, as well as a vocal chorus cheerily singing the lyrics of Jay Livingston and Ray Evans to illuminate Harlow's personal difficulties. But the music was no worse than the film itself or, for that matter, the salacious and inaccurate book on which it was based. The 2003 CD reissue on DRG adds an alternate vocal version of the main theme, 'Lonely Girl,' that is almost a minute longer than the original.“ (William Ruhlmann, AMG)
Produced by Joseph E. Levine
Digitally remastered 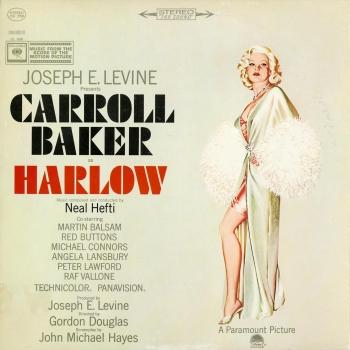 Neal Hefti
was born October 29, 1922 to an impoverished family in Hastings, Nebraska. He started playing the trumpet in school at the age of eleven, and by high school was spending his summer vacations playing in local territory bands to help his family make ends meet.
Growing up in a big city like Omaha, Neal was exposed to some of the great bands and trumpeters of the Southwest territory bands, and he was also able to see some of the virtuoso jazz musicians from New York that came through Omaha on tour. His early influences all came from the North Omaha scene. He said,
“We'd see Basie in town, and I was impressed by Harry Edison and Buck Clayton, being a trumpet player. And I would say I was impressed with Dizzy Gillespie when he was with Cab Calloway. I was impressed with those three trumpet players of the people I saw in person... I thought Harry Edison and Dizzy Gillespie were the most unique of the trumpet players I’d heard.”
These experiences seeing Gillespie and Basie play in Omaha foreshadowed his period in New York watching Gillespie play and develop the music of bebop on 52nd Street, and Neal’s later involvement with Count Basie's band.
In 1939, while still a junior at North High in Omaha, he got his start in the music industry by writing arrangements of vocal ballads for local bands, like the Nat Towles band. Harold Johnson recalled that Neal's first scores for that band were "Swingin' On Lennox Avenue" and "More Than You Know," as well as a very popular arrangement of "Anchors Aweigh". Some material that Neal penned in high school was also used by the Earl Hines band.
Two days before his high school graduation ceremony in 1941, he got an offer to go on tour with the Dick Barry band, and traveled with them to New Jersey. He was quickly fired from the band after two gigs because he couldn't sight-read music well enough. Stranded in New Jersey because he didn't have enough money to get home to Nebraska, he finally joined Bob Astor's band. Shelly Manne, drummer with Bob Astor at the time, tells that, even then, Neal’s writing skills were quite impressive:
“We roomed together. And at night we had nothing to do, and we were up at this place — Budd Lake. He said, "What are we going to do tonight?" I said, "Why don't you write a chart for tomorrow?" Neal was so great that he'd just take out the music paper, no score, [hums] — trumpet part, [hums] — trumpet part, [hums] — trombone part, [hums], and you'd play it the next day. It was the end. Cooking charts. I’ll never forget - I couldn't believe it. I kept watching him. It was fantastic.”
After an injury forced him to leave Bob Astor, he stayed a while in New York, playing with Bobby Byrne in late 1942, and then with Charlie Barnet for whom he wrote the classic arrangement of “Skyliner.” During this time in New York, he hung around the clubs on 52nd Street, listening to bebop trumpet master Dizzy Gillespie and other musicians, and immersing himself in the new music. Since he didn't have the money to actually go into the clubs, he would sneak into the kitchen and hang out with the bands, and he got to know many of the great beboppers.
He finally left New York for a while to play with the Les Lieber rhumba band in Cuba. When he returned from Cuba in 1943, he joined the Charlie Spivak band, which led him out to California for the first time, to make a band picture. Neal fell in love with California, and after making the picture in Los Angeles he dropped out of the Spivak band to stay in California. www.nealhefti.com