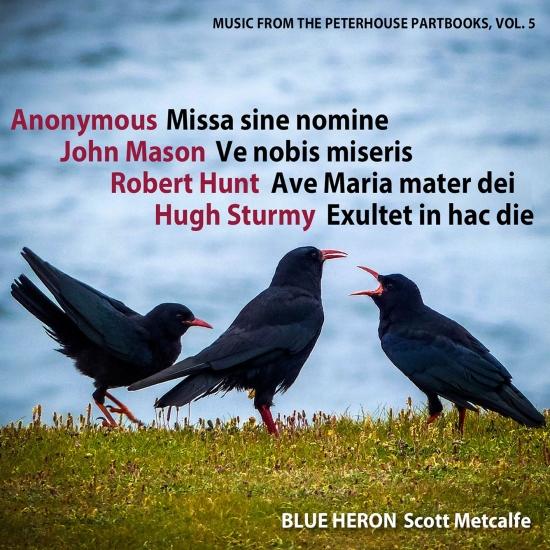 Volume 5 of the acclaimed series Music from the Peterhouse Partbooks contains the world premiere recording of a Mass by an anonymous English composer from the first half of the 16th century. Since the source of the cantus firmus has not been identified, the Mass remains without a name (“sine nomine”). The disc also includes an antiphon addressed to St. Augustine of Canterbury which is the only surviving work of Hugh Sturmy, a short and dramatic Ave Maria mater dei by Robert Hunt, whose Stabat mater is a highlight of vol. 3 of the series, and the sonorous and captivating Ve nobis miseris by John Mason, for men’s voices in five parts. This recording is part of a 5-CD project which began in 2010.
Blue Heron
Scott Metcalfe, direction
Restored by Nick Sandon 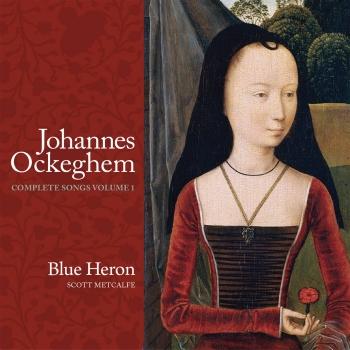 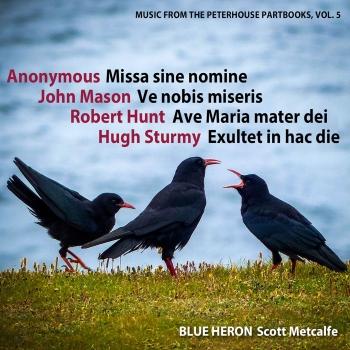 Music from the Peterhouse Partbooks, Vol. 5 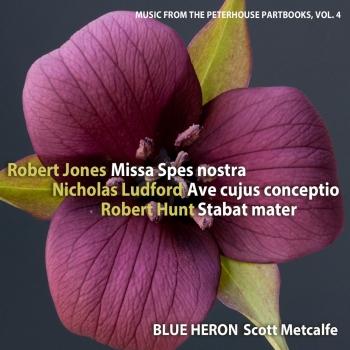 Music from the Peterhouse Partbooks, Vol. 4 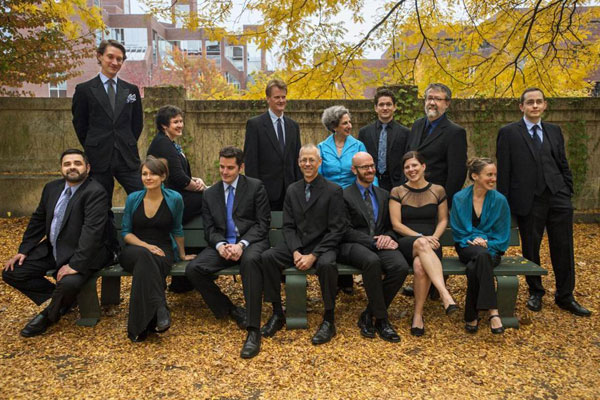 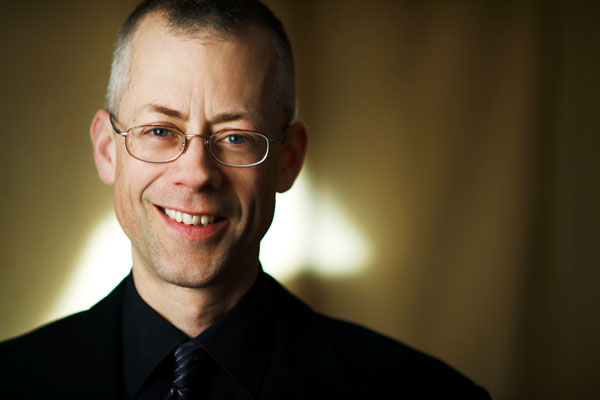 Blue Heron
The vocal ensemble Blue Heron has been acclaimed by The Boston Globe as “one of the Boston music community’s indispensables” and hailed by Alex Ross in The New Yorker for the “expressive intensity” of its interpretations. Combining a commitment to vivid live performance with the study of original source materials and historical performance practice, Blue Heron ranges over a wide and fascinating repertoire, including 15th-century English and Franco-Flemish polyphony, Spanish music between 1500 and 1600, and neglected early 16th-century English music, especially the rich and unique repertory of the Peterhouse partbooks, copied c. 1540 for Canterbury Cathedral. Blue Heron’s first CD, featuring music by Guillaume Du Fay, was released in 2007. In 2010 the ensemble inaugurated a 5-CD series of Music from the Peterhouse Partbooks. Three discs have been released so far, of music by Hugh Aston, Robert Jones, Nicholas Ludford, John Mason, and Richard Pygott; volume 4 will be released in Spring 2015, and Volume 5 will follow in 2016. Blue Heron also recorded a CD of music to accompany the book Capturing Music: The Story of Notation by Thomas Forrest Kelly, which was published in November 2014 by W. W. Norton. All of Blue Heron’s recordings have received international critical acclaim and volume one in the Peterhouse partbooks series made the Billboard charts.
Blue Heron presents a subscription series in Cambridge. The ensemble has appeared at the Boston Early Music Festival; in New York City at The Cloisters, the 92nd Street Y, and Music Before 1800; at Dumbarton Oaks in Washington, D.C., at Festival Mozaic in San Luis Obispo, California, and at the Berkeley Early Music Festival. In September 2012, Blue Heron took up a new position as ensemble in residence at the new Center for Early Music Studies at Boston University. Highlights of the 2013-14 season included a return to The Cloisters and debut appearances at the Library of Congress, at Yale University, and in Seattle, Kansas City, and Cleveland. In 2014-15 the ensemble is inaugurating a long-term project to perform the complete works of Johannes Ockeghem and touring to St. Louis, Chicago, and Milwaukee. Blue Heron is a highly flexible performing organization which draws from a roster of musicians in order to constitute the ensemble best suited to the repertoire at hand; thus the ensemble may range in size from three singers (for a fifteenth-century song) to around a dozen (for a large-scale early sixteenth-century English mass) and adds instruments (slide trumpet, trombone, fiddle, harp, dulcian) when appropriate.
Why “Blue Heron”?
Back in 1999 we thought long and hard about the right name for a new professional vocal ensemble that would specialize in Renaissance music. All the good historical names were already long gone—used over and over again—and anyway we wanted something that would suggest that historical correctness was not our ultimate goal. We wanted something that was memorable and easily pronounceable; preferably in English, with some local flavor to it. Now, there are Great Blue Herons all over Boston and Massachusetts; they can be seen around ponds everywhere and up and down the Charles River. (In fact, they are found along the entire east coast, from Cape Breton Island to the Gulf of Mexico, and along the entire Pacific coast, too. They are even found as occasional vagrants in Europe.) Striking, memorable, good graphic possibilities… But it’s a dada name, really. Does anyone remember the recorder trio Sour Cream? Frans Brüggen, Walter van Hauwe, and Kees Boeke. A truly countercultural enterprise from the 1960s. They dressed all in white and played both old and new music. Someone once mentioned to us a medieval legend which had it that the heron was the only bird that sang in parts, but we have been unable to substantiate the tale.
Scott Metcalfe
has gained wide recognition as one of North America’s leading specialists in music from the fifteenth through seventeenth centuries and beyond. Musical and artistic director of Blue Heron since its founding in 1999, he is also music director of New York City’s Green Mountain Project (Jolle Greenleaf, artistic director), whose performances of Claudio Monteverdi’s Vespers of 1610 and other Vespers programs devised by Metcalfe have been hailed by The New York Times as “quite simply terrific” and by The Boston Globe as “stupendous.” Metcalfe has been a guest director of the Handel & Haydn Society (Boston), TENET (New York), Emmanuel Music (Boston), The Tudor Choir and Seattle Baroque, Pacific Baroque Orchestra (Vancouver, BC), Quire Cleveland, and the Dryden Ensemble (Princeton, NJ), and he conducted Early Music America’s Young Performers Festival Ensemble in its inaugural performance at the 2011 Boston Early Music Festival.
Metcalfe also enjoys a career as a baroque violinist and currently plays with Les Délices (dir. Debra Nagy), L’Harmonie des Saisons (dir. Eric Milnes), and other ensembles. He teaches vocal ensemble repertoire and performance practice at Boston University and in his spare time is at work on a new edition of the songs of Gilles Binchois (c. 1400-1460). Metcalfe received a bachelor’s degree in 1985 from Brown University, where he majored in biology. Perhaps uniquely in the early music world, he was lead author of an article published in the Annals of Botany. In 2005 he completed a master’s degree in historical performance practice at Harvard. He lives in Watertown with his family and enjoys biking, hiking, and all sorts of outdoor recreation.