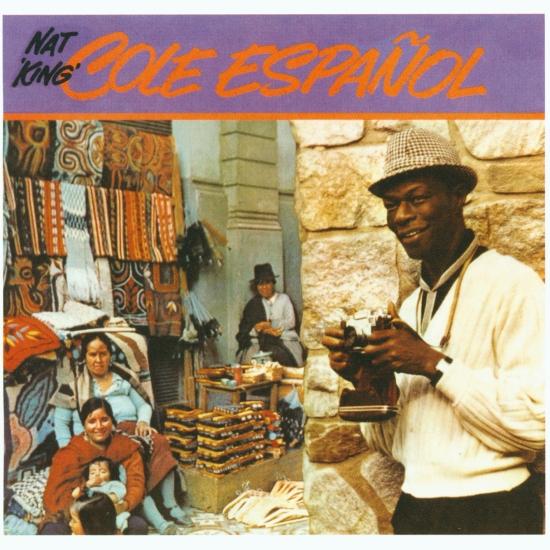 Latin language recordings were common among American pop vocalists in the '50's. The singer would have to learn the words phonetically, a feat all the more impressive when one considers that at the time performances were almost always 'live' even in the studio.
In 1958, Nat went to Havana, Cuba and decided to record his first Latin American records. Seeing to the arrangements was no less than Nelson Riddle, but rather than impose his style, Nelson sought a more authentic orchestral flavor. The orchestra was under the able direction of Armando Romeu, Jr. and Mariachi de Alfredo Serna, with the results being unusually authentic for the genre. In this first album, the orchestras were recorded in Havana, Cuba, and Nat recorded his vocal later at the Tower. Nat's efforts at Latin American dialects doubtless sound strangely accented to anyone familiar with the appropriate languages, but there's no question that the sound and musicality of his voice and the efforts of Nelson, Armando and Alfredo come off fine.
Nat King Cole's beautiful sound translates across language barriers. This album was more proof. The most important factor though is probably just having an honest good nature come across, which anyone can appreciate. Nat and Capitol would encore twice, with A Mis Amigos and More Cole Espanol, and Latin and English speaking folks alike bought impressive amounts of all three albums.
'Nat King Cole addressed his growing international following with Cole Español, on which he sang in Spanish. Although he did not speak the language, he learned the song lyrics phonetically. Nine of the 11 selections had backing tracks recorded by conductor Armando Romeu, Jr., in Havana, Cuba, in February 1958, with Cole adding his vocals in Hollywood in June. The other two, 'Cachito' and 'Noche de Ronda,' were cut with Hispanic musicians in Hollywood under the direction of Capitol Records' Dave Cavanaugh. The tunes were a mixed bag of Latin standards including Mexican mariachi music ('Adelita') and even the Italian 'Arrivederci Roma' (sung in Spanish), and Cole's vocals were augmented by the Rivero Quartet and other uncredited singers. While that no doubt was intended to shore up his tentative performances, it actually showed him up, as the native Spanish singers offered a painful contrast to his own pedestrian readings of words he did not understand and pronounced with no flair. (On one track, 'Tú, Mi Delirio,' he abandoned the microphone for the piano to delightful effect.) Cole's singing voice was as smooth and attractive as ever, which must have helped, though, and the album's sales — it reached the Top 20 in the U.S. and was a big hit internationally — indicated that Spanish-speaking audiences were flattered that an American singer would try so hard to communicate with them in their own language.' (AllMusic.com)
'Nat King Cole's beautiful sound translates across language barriers.'
Nat Cole, vocals
Nelson Riddle, arranger
Mariachi de Alfredo Serna
Armando Romeu, Jr., conductor
Recorded February 17th, 18th, 20th 1958 & June 11th & 30th 1958
Produced by Lee Gillette
Digitally remastered.