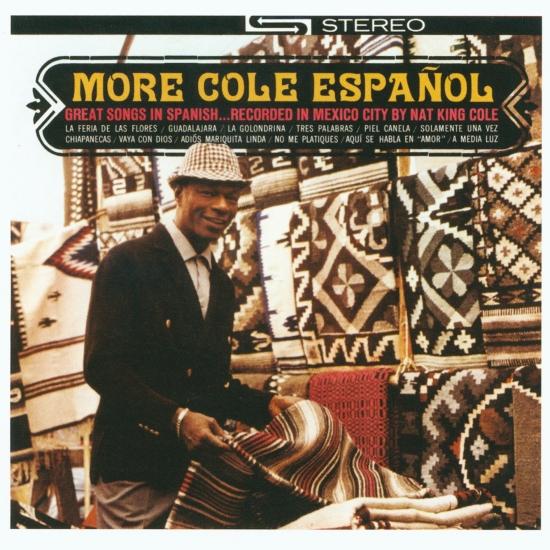 'More Cole Español was Nat King Cole's third album of songs sung in Spanish, after Cole Español (1958) and A Mis Amigos (1959). Recorded in Mexico City with Mexican singers and musicians, but arranged and conducted by Ralph Carmichael, the collection demonstrated that Cole had made significant advances as a singer in Spanish in a few years.
Cole Español had found him providing tentative, phonetically learned syllables over pre-recorded tracks imported from Cuba, giving him the sound of someone trying to avoid making mistakes. A Mis Amigos, cut in Rio de Janeiro during the South American tour promoting Cole Español, was better, but still not a truly complete fit for Cole.
He still didn't sound like he always knew what he was singing, and he still seemed to be working on his pronunciation, but on More Cole Español he was clearly having a lot more fun. In part, this had to be because the arrangements were more rhythmic and uptempo, and Cole must have been taking enthusiasm from the Mexican musicians who accompanied him. And he must have been more familiar with material that included crossover hits such as 'Vaya con Dios.' Whatever the reasons, More Cole Español was his most successful effort at making music for fans south of the border.' (AllMusic.com)
Nat King Cole, vocals
Digitally remastered.