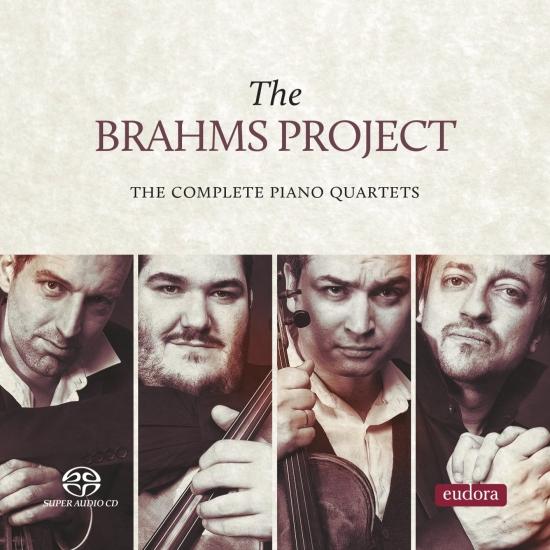 Four of the foremost Spanish musicians of their generation join forces in exploring three of German Romanticism’s highest peaks. Brahms’s piano quartets are cornerstones of the chamber music repertoire and works of symphonic scope, and the Brahms Project offer the listener a very personal and intense rendition of these Brahms masterpieces.
The Brahms Project 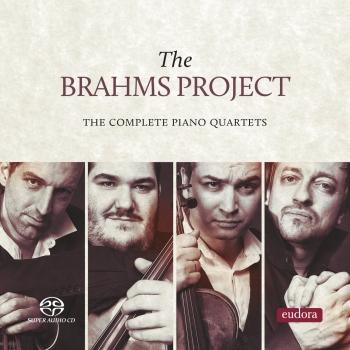 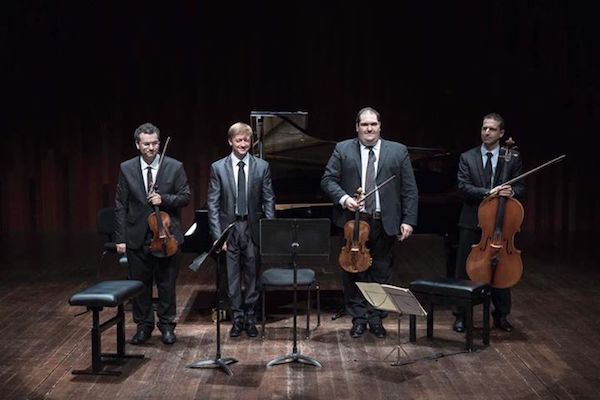 Enrique Bagaría
graduated in piano from the city’s Conservatorio Municipal and also studied at the École Normale Alfred Cortot in Paris. He went on to postgraduate studies under the supervision of S. Pochekin, D. Bashkirov, G. Eguiazarova and V. Sukhanov, and attended masterclasses given by such eminent pianists as A. de Larrocha and V. Margulis, among others.
In recent seasons he has performed at many of the world’s major venues and festivals, including Barcelona’s Palau de la Música Catalana and L’Auditori, the St Petersburg Philharmonia, Salle Cortot (Paris) and National Centre for the Performing Arts (Beijing), as well as appearing as soloist with the Mariinsky Orchestra, Wiener KammerOrchester and most of the Spanish symphony orchestras, including the Sinfónica de Galicia, and Simfònica de Barcelona i Nacional de Catalunya (OBC), under the baton of such distinguished conductors as Valery Gergiev and Vasily Petrenko.
A keen chamber musician, he regularly collaborates with Cuarteto Quiroga, Lucas Macías, Guilhaume Santana y Josep Colomé. Enrique currently teaches at the Conservatorio Superior de Música del Liceu in Barcelona and at the Escuela Superior de música de Cataluña.
Josep Colomé
Born in Sabadell in 1979, violinist Josep Colomé began his musical studies with his father at the age of four. At eighteen, he graduated with honours from Barcelona’s Liceu Conservatory, winning all prizes available to him. He continued his studies at the Staatliche Hochschule für Musik in Freiburg with Nicolas Chumachenco, and then at Northern Illinois University (Chicago) with Shmuel Ashkenasi and the Vermeer Quartet.
He has won many awards, including Second Prize and National Music Prize at the first Amadeo Roldán International Violin Competition (Havana, 1997), and the Mendelssohn Wettbewerb 2000 (Berlin).
He has performed with such leading artists as Lorin Maazel, Neville Marriner, Enrique García Asensio, Nicolas Chumachenco, Arturo Tamayo, Augustin Dumay and Heinz Holliger. A founding member of the Alart Quartet, he also appears regularly in recital with pianist Enrique Bagaría. He currently teaches at the Aragón Conservatory in Zaragoza, and his recordings include the Casals Violin Sonata for the Klassic Cat label, and El violí invisible and the Brahms Violin Sonatas for Solé Recordings.
Joaquín Riquelme
Born in Murcia in 1983, Joaquín Riquelme began his musical education at the Conservatory of Murcia with Pedro Navarro, and Antonio J. Clares, continuing his studies with Emilio Mateu and Alan Kovacs at the Royal Conservatory of Madrid (RCSMM), from which he graduated with honours. He then undertook postgraduate studies with Professor Hartmut Rohde at the University of the Arts (UdK) in Berlin, completing his work there in 2010. He also attended masterclasses given by Hartmut Rohde, Ashan Pillai, Jesse Levine, Nobuko Imai and Jean Sulem, among others.
Since February 2010 Joaquín has been a full member of the Berlin Philharmonic Orchestra. He has performed with the orchestra at the most prestigious concert halls and festivals around the world, under the baton of such eminent conductors as Sir Simon Rattle, Claudio Abbado and Mariss Jansons.
An active chamber musician, he has performed with groups such as the Ensemble Berlin, Philharmonisches Oktett and Landsberg Sommerakademie at the Schwetzingen, Traunstein, Hohenstaufen and Musique à l’Emperi festivals, among others, as well as in venues such as Munich’s Herkulessaal, Vienna’s Konzerthaus and the Berlin Philharmonie. His chamber music partners include Emmanuel Pahud, Jörg Widmann, Christian Zacharias and Hartmut Rohde.
David Apellániz
has appeared as soloist with the Real Orquesta Sinfónica de Sevilla, Lisbon’s Orquestra Gulbenkian, the Orchestre National de Lyon, Orquestra de València and Orquestra Simfònica de Barcelona at some of the music world’s most prestigious events and venues, including the Salzburg and Lyon festivals, the Berlin Konzerthaus and the Quincena Musical Donostiarra (San Sebastián Musical Fortnight). He is also regularly invited to appear as guest principal with the Orquestra de València, Orquesta Sinfónica de Navarra and Orquestra de Cadaqués, among others.
He frequently performs with other eminent musicians and ensembles, including the Cuarteto Casals, Nicolas Chumachenco, Gérard Caussé and Paul McCreesh, and has made more than fifteen recordings as soloist for various labels, including Naxos, Sony, Col legno, Neos and RNE. As a member of the renowned Arriaga Piano Trio, he has appeared on stage at the leading international festivals. A champion of contemporary music, he has premiered a number of new works dedicated to him by composers such as Fabián Panisello and César Camarero, and has performed with the Plural Ensemble and Grup Instrumental de València at festivals worldwide.
Since 2003 he has been Chair of the Cello Department at the Aragón Conservatory, and he is often invited to give classes at well-known music schools around the world.