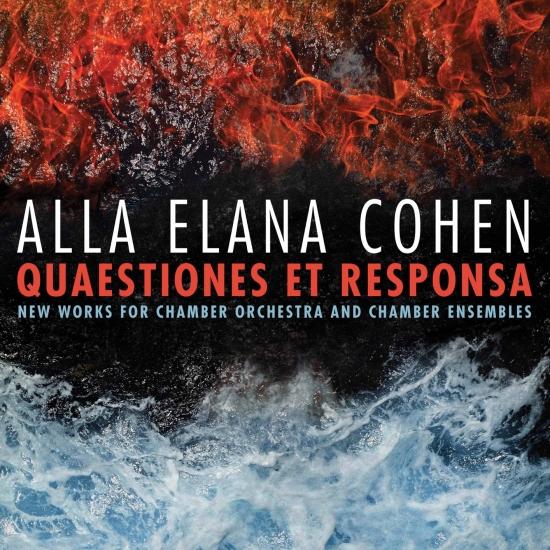 In celebration of her 30th anniversary of coming to America, Boston based composer Alla Cohen presents a double album of new works for chamber orchestra and chamber ensembles. A graduate of highest honors of the famed Moscow Conservatory, Cohen emigrated to the United States in 1989, first teaching at the New England Conservatory of Music, and for the last 15 years— as a Professor at Berklee College of Music. Her works have been awarded multiple prizes, are raved about in stellar reviews, and have been performed by acclaimed musicians from around the world.
Corresponding with Cohen’s monumental milestone of three decades in the United States as a highly acclaimed composer and sought-after master composition teacher, QUAESTIONES ET RESPONSA is a monumental release. This double album set, compiling Cohen’s recent compositions, very likely will be met with the same acclaim as her previous releases. Cohen's music is strikingly unique by its style, monumental in scale, yet delicately crafted in every detail. The music is moving and uplifting, emotionally and spiritually, and is visionary and highly imaginative. These are the works of a dedicated master composer whose work and teaching captures the spirit of 20th and 21st-century art music. Cohen’s music is thought through, with painstaking care, yet retains a sense of being unbridled; often, the seemingly more traditional titles (like Partita) completely belie expectations - Cohen expands formal presumptions considerably and takes listeners on a journey to new lands of originality, discovery, and artistic freedom.
Notably, Cohen prides herself on performing her own parts at the piano – and justly so, for who could understand and execute Cohen's thoughts better than the thinker herself? Hence, all the piano parts on QUAESTIONES ET RESPONSA are played by Cohen, who shines in this respect with empathetic sensitivity and impeccable timing; a skill she undoubtedly passes on to and demands from her other performers.
QUAESTIONES ET RESPONSA is a double album perfectly suited to the distinguished, educated contemporary music fancier. Defying conjectures and conventions, it is nothing less than confident, resolute sophistication, just as Cohen herself. Her music will also appeal to all those who are interested in the directions of art music today.
"My heartfelt gratitude goes to all my wonderful performers who played my music so brilliantly and with such inspiration and enthusiasm at the recording sessions; to John Weston and everyone at Futura Productions for their wonderful work recording my compositions; to Corey Schreppel for his outstanding work editing, mixing, and mastering my pieces; to Joseph Bachour for his constant friendly support and design input; and of course to PARMA Recordings, by whose amazing efforts the set of my album QUAESTIONES ET RESPONSA is released, and who did such a wonderful job with the final mastering on my album and with the visual design for the set." (Alla Elana Cohen)
Elzbieta Brandys, flute
Izumi Sakamoto, oboe
Alexis Lanz, clarinet
Jerry Sabatini, trumpet
Timur Rubinshteyn, timpani
Eric Huber, vibraphone
Thomas Schmidt, marimba
Marissa Licata, 1st violin
Emily Rome, 2nd violin
Ervin Dede, viola
Sebastian Bäverstam, cello 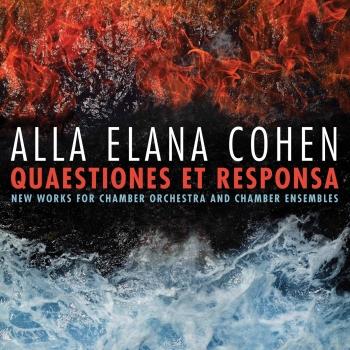 Alla Elana Cohen
is a distinguished composer, pianist, music theorist, and teacher who came to the United States in 1989 from Russia. Graduating from the Moscow State Tchaikovsky Conservatory with the highest honors of distinction, Cohen lives in Boston and is a professor at Berklee College of Music.
As a composer, Cohen works in all genres of orchestral, chamber, and operatic music, and has an extensive catalogue of original compositions. Cohen’s music, often with the composer at the piano, is regularly performed and recorded with much success by internationally acclaimed performers, and garners great reviews and previews from media sources such as Fanfare Magazine, Boston Globe, Boston Herald, Boston Phoenix, Boston Musical Intelligencer, ArtFuse, Cinemusical, Gapplegate, and others. Cohen was also interviewed and featured on WGBH TV and appeared in a featured video on boston.com. Radio programs about Cohen’s music were broadcast on the radio station Orpheus on the Russia State Center of Radio and TV Programs in Moscow and in the United States on the Russian-American Radio station United4:Good.
Cohen has released 9 albums of her compositions: Dedications; The Route of Compassion; The Road That Chooses Us; The Day of Atonement; Praise Him with Harp and Lyre, Praise Him with Strings and Flutes; Hoffmanniana; RED LILIES OF BELLS, GOLDEN LILIES OF BELLS, WHITE LILIES OF BELLS (RR7953); JUPITER DUO (RR7978); QUAESTIONES ET RESPONSA (RR8017) (the last three were released under Ravello Records).
Cohen has been recognized as a composer by ASCAP, being an annual recipient of ASCAPLUS Awards, and has received commissions from the Music Teachers National Association. Cohen received the International Music Prize for Excellence in Composition awarded by the National Academy of Music in conjunction with the Municipal Conservatories of Neapolis and Sykies, Greece, in 2010. Cohen’s opera buffa, The Cunning Housekeeper, won the Director’s Choice Award organized by Boston Metro Opera in 2014.