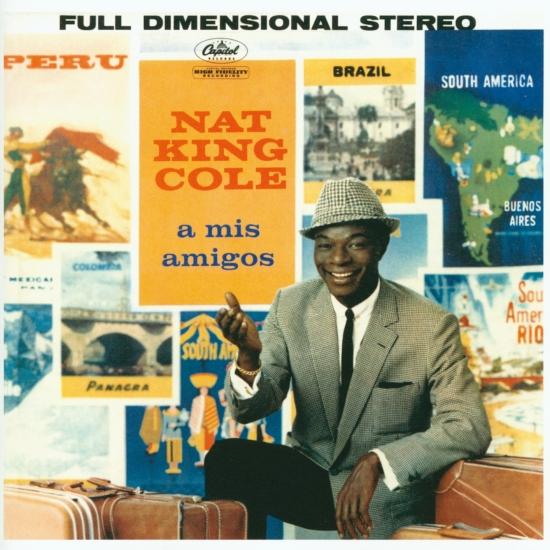 Although it's clear that Nat 'King' Cole is no native Spanish speaker, his Spanish language vocals on 1959's „A Mis Amigos“ are pleasant enough, and give the whole affair a fun South-of-the-border feel. The album's real strong suit, however (in addition to Cole's naturally gorgeous timbre), is the backing band, which Cole picked up in Rio de Janeiro, where the set was recorded.
Accordingly, tunes like 'Ay, Cosita Linda' and 'Perfidia' are carried along in true authentic style, while Cole croons and tries to trill his R's along with them. This is a bit of a novelty in Cole's discography, but the fine musicianship makes it worth a listen.
Capitol Records imported instrumental tracks recorded in Mexico and Cuba and had Cole sing over them, having learned the lyrics phonetically. A Mis Amigos, however, was recorded in Rio de Janeiro during Cole's South American tour of 1959, with Brazilian musicians in the studio alongside the singer. That, the benefit of experience, and the reception his concerts were receiving may have helped improve his performances.
Nat King Cole, vocals, piano
Digitally remastered.