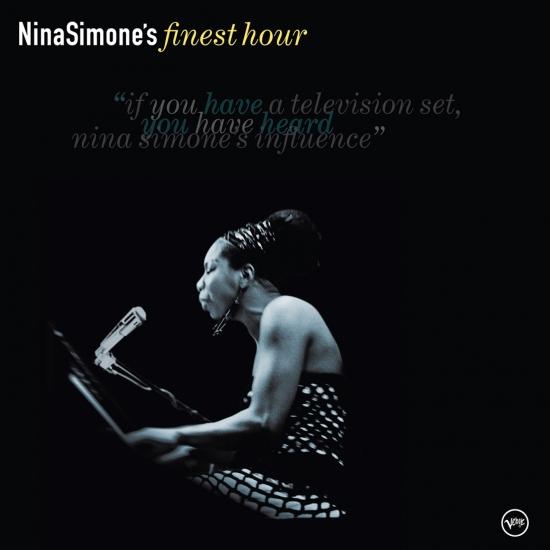 Nina Simone communicates with a unique force on this Finest Hour collection, a welling, riveting power that's beyond the range of other singers. It's there whether the song is romantic or political, whimsical or sentimental, and these recordings from the 1960s demonstrate the range of material that she could make her own, from Gershwin to Jacques Brel, from Screamin' Jay Hawkins to Nat Adderley. With her own civil rights era anthems like 'Mississippi Goddam' and the Brecht-Weill 'Pirate Jenny,' Simone commands our attention with a profoundly brooding, searing rage, while there's potent sensuality in her 'Wild Is the Wind' and Willard Robison's 'Don't Smoke in Bed.' Whether she's accompanying herself with her spare piano or defying studio orchestras with the intensity of her performance, Simone is a special singer, her art consisting in stripping away the decorative artifice of a song to reveal a molten core beneath.
„Verve's Finest Hour collection of Nina Simone's work compiles 60 minutes of career highlights, including 'Wild Is the Wind,' 'I Put a Spell on You,' 'Four Women,' 'I Loves You, Porgy,' and 'My Baby Just Cares for Me.' Though it's by no means a definitive compilation of Simone's music, it does provide a welcome overview of her Verve years.“ (Heather Phares)
Nina Simone, vocals, piano
Hal Mooney, arranged, conductor (tracks 3, 4)
Horace Ott, arranged, conductor (tracks 13)
Rudy Stevenson, flute, guitar
Lisle Atkinson, bass
Bobby Hamilton, drums
Digitally remastered
Please Note: we do not offer the 192 kHz version of this album, because there is no audible difference to the 96 kHz version!

I Put A Spell On You (Remastered)

Let It All Out (Remastered)

Wild Is The Wind (Remastered)

Nina Simone And Her Friends