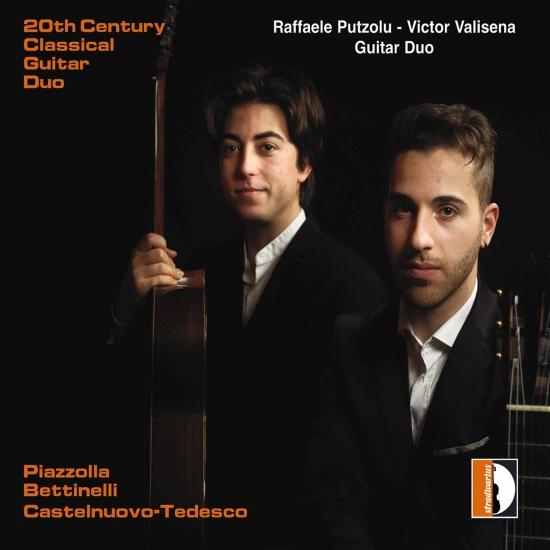 Piazzolla, Castelnuovo-Tedesco, Bettinelli: the fil rouge that unites this apparently anomalous choice is to be sought, first and foremost, in the original character of the repertoire, composed purposely for two guitars, in other words conceived especially for this combination and for its ‘double’ and ‘specular’ sonic possibilities. This exploration of the sonic universe allows us to rediscover a repertoire whose leitmotiv can be found in the element of dialogue, in the capacity of the guitar to become ‘other’ than itself by reverberating in its own identity: the mirror image that reflects a vision that is identical and yet filtered by a reality, that captures the essence of the guitar duo as an extended form of the solo guitar, a vehicle of complementarity and of expression amplified in its sonic potential. But that is not all: the choice of three composers whose expressive forms differ widely from each other, in their genesis, in their syntax and realization, can nonetheless find coherence in their common search for a balance between the voices, in the crystalline clarity of the conduct of the parts and in the sonic representation of a singular unitarity, in an accomplished identity of intent.
Victor Valisena, guitar
Raffaele Putzolu, guitar 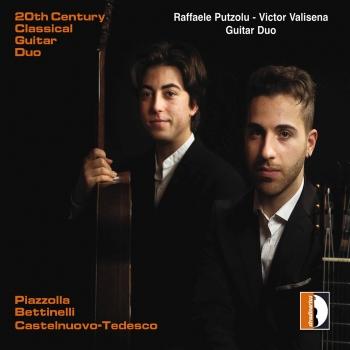 Raffaele Putzolu
was born in Baratili S. Pietro in 1997. He began studying the guitar at the age of 7 with Luca Piras, continuing some years later with Ivo Zoncu and Cristian Marcia. Since 2016 he has been studying at the Arrigo Pedrollo Conservatory in Vicenza under Stefano Grondona. He immediately gained various awards, including second prize in the Rovere D’oro International Competition “Young Talents” in San Bartolomeo al mare, first prize in the Nilo Peraldo Bert International Competition in Biella, second prize in the Andrés Segovia International Guitar Competition in Pescara and the Diploma of Merit at the International Guitar Masterclass in Ponte in Valtellina. He has attended many masterclasses and advanced courses held by eminent guitarists like Paul Galbraith and Laura Mondiello. As a concert artist he has performed both as soloist and in chamber groups in prestigious concert venues: at the Teatro Comunale in Lonigo, as soloist in the Concierto de Aranjuez with the Orchestra of the Teatro Olimpico; at the Palazzo Chiericati (Vicenza), where he played with the Quartet of the OTO (Orchestra of the Teatro Olimpico) in L. Boccherini’s Fandango; in the concert halls of the Conservatory in Vicenza, where he was soloist in M. Giuliani’s Concerto in A major with the Orchestra of the Conservatory. He also played at the Teatro Lirico (Cagliari) and at the headquarters of Unesco (Paris) in a trio with the guitarists Cristian Marcia and Luca Micheletto; and in 2017 he formed a guitar quartet with Alberto Rassu, Alberto Santin and Stefano Trevisan with whom he played at the Museo Gregoriano Profano of the Vatican Museums. Raffaele Putzolu plays a guitar made by the German luthier Gerard Oldiges and another made by the Japanese luthier Kazuo Sato.
Victor Valisena
is an Italian guitarist born in Padua in 1996. Since 2007 he has gained numerous awards and recognitions for his career. He has taken part in various international guitar competitions, always obtaining outstanding results: he won first prize in the Andrés Segovia International Competition (Pescara 2020), as well as in the Tirana Youth International guitar competition in Albania (Tirana 2015-2016), in the Premio Contea International Guitar Competition (Treviso 2016), in the Diapason d’oro International Guitar Competition (Pordenone 2015), in the City of Cremona International Guitar Competition (2016), in the Luigi Denza European Guitar Competition (Castellamare di Stabia 2016) and in the Transylvanian International Guitar Festival in Cluj, Romania (Cluj Napoca 2007). He is regularly invited to give concerts at various European guitar festivals. He maintains a lively concert activity as soloist, playing in prestigious concert halls, with frequent invitations from important institutions in Italy and Europe (Santisteban del Puerto, Cambridge, Cluj Napoca, Milan, Rome, Samobor, Tirana, Vicenza, Padua, Venice, Codroipo, Latisana, Sondrio, Lecce, Scandicci, Florence and Pescara). In 2012 the composer Angelo Gilardino dedicated his prelude Rio de Janeiro to him, a piece included in a collection of 7 preludes dedicated to promising young guitarists. For the Stradivarius label he recorded Bach’s Suite BWV 996 in collaboration with the A. Pedrollo Music Conservatory in Vicenza. He studied in Italy under Luigi Biscaldi and Stefano Grondona in Vicenza, where he gained the following academic qualifications: Diploma in guitar with distinction and special mention (Arrigo Pedrollo Conservatory, Vicenza 2015) and second level Diploma with full marks and special mention (2018). During his formative years he attended masterclasses and advanced courses with internationally acclaimed artists like Paul Galbraith, Oscar Ghiglia and Laura Mondiello, obtaining study grants and Diplomas of Merit. Since the academic year 2017-18 he has taught guitar at several municipal schools in Padua. He plays guitars made by the German luthier Gerhard Oldiges (2014) and the Italian luthier Luca Waldner (1996).