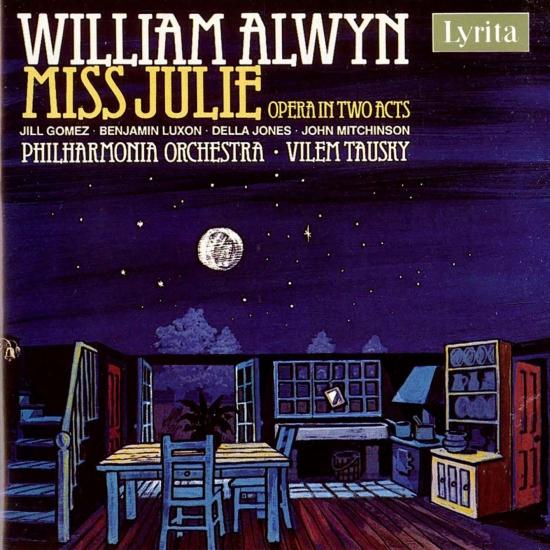 "It is good to have this superb recording of William Alwyn's colourful and confident adaptation of Strindberg's play on CD. Alwyn, an outstanding film-composer, here consistently demonstrates his mastery of atmosphere and timing to bring out the chilling intensity of this story of Miss Julie's sudden infatuation for her father's manservant. The performance under Vilem Tausky is strong and forceful with superb singing from all the principals." (Edward Greenfield, Gramophone)
"Based on this recording, it's clear that British composer William Alwyn (1905-1985) was an expert at writing opera, perhaps due in part to his extensive experience as a film composer. The fact that his opera Miss Julie, based on the Strindberg play, has never been produced, would be hard to understand, if it were not for the political vagaries of opera companies that anoint certain composers while neglecting works as fine as this one. One hopes that Miss Julie will have the same good fortune as Richard Rodney Bennett's The Mines of Sulphur and find an advocate to resurrect it and bring it to the public's attention.
Alwyn understands, articulates, and puts into practice a principle of opera that eludes many contemporary opera composers. While the text is critical, its setting must be undergirded by a compelling musical logic reflecting the deep psychology of what is happening in the characters' minds and on stage, rather than simply illustrating the words being sung. Alwyn's style is difficult to pin down; he is an eclectic who uses a variety of resources available to twentieth century composers in the service of a strong lyrical impulse. His text setting is exquisite, both technically and in the way it propels the drama forward. He is masterful at shaping scenes and the music becomes rhapsodically intense at the climaxes. The operas of Janácek are perhaps the works Miss Julie most resembles, both musically and dramatically, and that is high praise. This recording, made for a 1977 BBC broadcast, features strong performances from soprano Jill Gomez, baritone Benjamin Luxon, mezzo-soprano Della Jones, and tenor John Mitchinson, who sing Alwyn's grateful vocal lines with fine diction, rich tone, and dramatic conviction. They are ably accompanied by the Philharmonia Orchestra, conducted by Vilem Tausky. The sound is vivid, allowing vocal, and instrumental details to emerge with clarity." (Stephen Eddins, AMG)
"The performance is very good, with Jill Gomez and Benjamin Luxon giving as much as they can to characters whose inner emotional life is barely suggested by the vocal lines themselves. The supporting cast (Della Jones and John Mitchinson) and orchestra also are first rate, and Lyrita’s sonics uphold the high standards of the house. Hard-core fans of the composer may well react more favorably than I did, but lovers of opera in general will have no trouble in pinpointing just what’s missing here, and may well find the experience as unfulfilling as Miss Julie found her own life. Happily, you don’t have to slit your wrists as a result: just avoid this opera." (David Hurwitz, classicaltoday)
Jill Gomez, soprano
Benjamin Luxon, baritone
Della Jones, mezzo-soprano
John Mitchinson, tenor
Philharmonia Orchestra
Vilem Tausky, conductor