Heart on My Sleeve Don Robertson 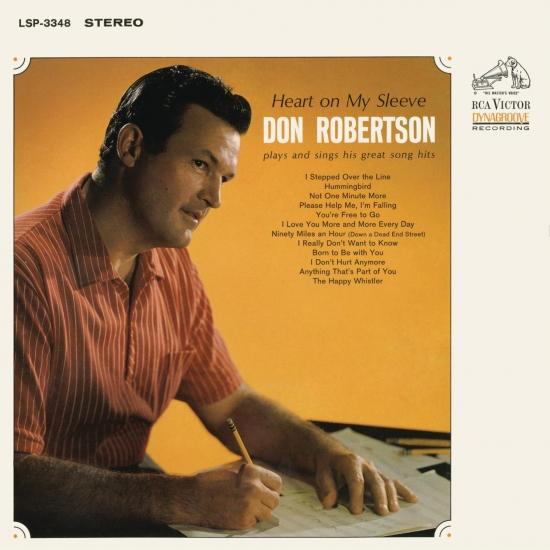 Info zu Heart on My Sleeve

In 1945, he moved to Los Angeles to pursue a music career, playing nightclubs, making demonstration recordings and working as a rehearsal pianist at Capitol Records. His start as a songwriter came in 1953, when he began collaborating with West Coast songsmith Hal Blair (also a member of the Nashville Songwriters Hall of Fame). The two would go on to write one of 1960's biggest country hits, 'Please Help Me, I'm Falling' (Hank Locklin), but by then Robertson had already co-written country chart-toppers for Eddy Arnold ('I Really Don't Want To Know') and Hank Snow ('I Don't Hurt Anymore').
Robertson wrote the 1955 Les Paul and Mary Ford hit 'Hummingbird' by himself, inspired by a bird he saw outside his North Hollywood studio window. That same year, he scored a Top 10 pop record of his own, with the self-penned tune 'The Happy Whistler.' And in 1956, his 'I'm Counting on You' caught the ear of Elvis Presley, who would go on to record 15 of Robertson's songs.
Robertson's biggest country hit was 'Please Help Me, I'm Falling,' a 14-week #1 that changed the way Nashville studio piano parts were played. Robertson played and sang on the demo, and producer Chet Atkins admired the way Robertson slid into the melody on the piano, in a style similar to something that might be played on a guitar. Atkins asked his session pianist, Floyd Cramer, to approximate Robertson's demo, and the song's extraordinary success brought the new 'slip-note' style into vogue.
Robertson penned his first pop #1 hit in 1964, when Lorne Green's version of 'Ringo' topped the chart. He was inducted into the Nashville Songwriters Hall of Fame in 1972.
Digitally remastered 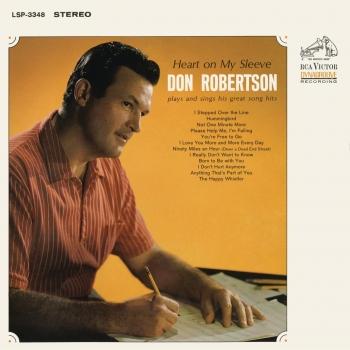 Heart on My Sleeve

Don Robertson
Donald Irwin Robertson was born in Peking, China 1922 to O.H. and Ruth Robertson. His father, a noted physician and medical scientist (developer of the first Blood Bank), was then head of the Department of Medicine at Peking Union Medical College. His mother, herself a talented pianist and poet/playwright, noticing his interest in the piano, started him on lessons at age four. He began composing simple songs around age seven.
Songs for ElvisA CD containing many of Don's original demos, entitled "Songs For Elvis" was released on Bear Family Records (August, 2003), along with an extensive booklet describing his career. [Click to buy Don Robertson: And Then I Wrote...Songs For Elvis] Don was fascinated by all kinds of music from cowboy songs to the symphonic music that nightly issued from his father's vast record library, as well as for the hymns he sang in the church choir on Chicago's South Side. Today, among his manuscripts, you will find everything from jazz to symphonic works.
In order to join the high school band (which did not use piano) Don also learned to play brass instruments and joined the marching band playing trombone and tenor horn. During high school and college he played piano in local dance orchestras and was earning money at it by age 14. In college, beset with conflicts, he was torn between following in his father's footsteps (as both his brothers did) and his love of music. He enrolled as a pre-med major and music minor at the University of Chicago, where his father was Professor of Medicine, but dropped out before completing pre-med and subsequently, through the help of musician friends, piano & organ team Harry Frohman & Dick Platt, he landed a job as musical arranger at Chicago Radio Station WGN, arranging for a girl's trio, the Brandt Sisters.
[In the early 1930s, the Robertsons began spending summer vacations at Birchwood Beach in Harbert, Michigan, near the home (and farm) of the Carl Sandburg family on the dunes overlooking Lake Michigan. The families became friends. Don and one of the Sandburg daughters, Helga, sometimes went horseback riding together. At the time when I used to visit the Sandburg home, he was working on a collection of folk songs which later was published in a book called The American Song Bag. Carl often played guitar and sang. One time he showed me a few chords for me to play on my $6 Sears&Roebuck guitar. My parents didn't think much of cowboy songs but they admired Sandburg, and Sandburg loved those songs. That was inspiring to me.
In 1945 he travelled to Los Angeles, as accompanist and arranger with another Chicago girls's trio, the Dinning Sisters. For a time, he played in Los Angeles area night clubs and, along with Lou Dinning, made demo records for publishers and songwriters. In the early fifties he worked for several years as a rehearsal pianist at Capitol Records in Hollywood, occasionally playing on record sessions as a keyboard sideman. … (www.donrobertson.com)