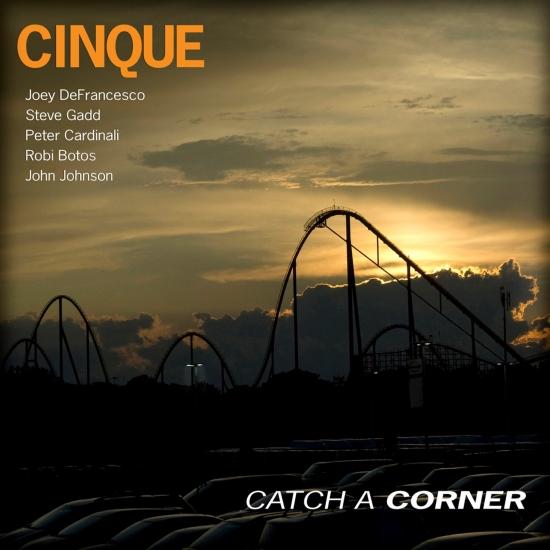 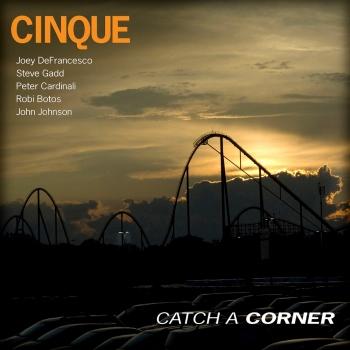 Cinque
Definition 1: From the Latin quinque, Cinque carries the meaning of "five" in Italian.
Definition 2: A new and star-studded jazz-funk quintet destined to turn heads.
The evocative amusement-park themed artwork of Catch A Corner is highly fitting. The debut album from new heavyweight combo Cinque will take you on one thrilling musical joyride.
The name Cinque will be unfamiliar, but its membership includes some genuine musical legends. Joey DeFrancesco is considered by many to be the greatest exponent of B3 organ playing in jazz, while Steve Gadd has long been the first call drummer for such stars as James Taylor, Eric Clapton, Steely Dan, Chick Corea, and Paul Simon. Award-winning pianist Robi Botos has opened for Oscar Peterson (the jazz legend actually selected Robi to teach his daughter piano), and has recorded and performed with artists ranging from Chaka Khan and Molly Johnson to James Blood Ulmer, veteran saxophonist John Johnson has accompanied Aretha Franklin, Dianne Reeves, and Diana Krall, and producer/bassist/arranger Peter Cardinali's lengthy resume includes the likes of Oscar Peterson, Rick James, Brecker Brothers, Ray Charles, Toots Thielemans and Michael BublÃ©.
Cinque is Cardinali's brainchild. He heads ALMA Records, an independent label recognized internationally for its impressive catalog and "music first" policy. "I've had a picture of this band for a number of years," Peter explains. "I really wanted to start a jazz-funk band, and only with top players. I knew Joey and Robi would hit it off musically, John is a stellar player, and Steve is my all time favorite drummer. He's a genuine drum god."There was no carefully constructed mandate for the Cinque sound. It was just a matter of assembling this musical dream team and giving them free rein. "The field was wide open," says Peter. "The members of Cinque are all great jazz and funk players. Catch A Corner is just a reflection of how we were feeling for the two days of writing and recording."
The free-flowing, spontaneous and warm vibe of this enchanting record is a direct reflection of the way it was made. The bulk of the compositions on Catch A Corner were written collectively in the studio, then recorded on the spot, live off the floor. The album came together over just two afternoons in Toronto studio The Drive-Shed, the noted facility run by award-winning engineer John "Beetle" Bailey. "What a great couple of days," reminisces Cardinali. "We came up with all the songs and recorded them in just six hours over two short afternoons. Everybody hit it off musically, and we were totally in sync."
"It was very spontaneous," affirms Joey DeFrancesco. "Ideas would come up on the spot. A line or a melody or some chords would form and we'd just go for it. I don't think we did more than two takes of anything, and we had a ball making it." Adding extra resonance to the making of this album for Joey was the fact that at the time of the sessions he again met the Toronto woman who is now his wife.
Robi Botos insists that "I think I had the most fun of anybody. Those guys are so musical, and it is deep water for me to play with them. Being on a recording and in a band with Steve Gadd and the guys is just amazing. I played drums before I started on piano, and at age 10 in Hungary I would watch Steve's instructional videos!"
Cardinali's hunch that the musical combination of Botos and DeFrancesco would be a potent one has paid off on both Catch A Corner and the previously recorded One Take: Volume 4. That latter album is part of a groundbreaking series in which a group of ace jazz players are placed in a studio for three hours and let loose. No rehearsals, no overdubs, no edits, and just one take of each tune they tackle. Produced by Cardinali for ALMA Records, Volume 4 featured Robi, Joey, saxophonist Phil Dwyer and drummer Vito Rezza.
"That was the first time Robi and I had really played together, and it was a great experience," says Joey. "We got into the groove together." That rapport is clearly audible on Catch A Corner, an album brilliantly featuring the interplay of the two virtuoso keyboardists.. On "Over The Humpty Dump," for instance, they trade licks with a deft touch, never getting in each other's way.
The first track Cinque wrote and recorded together was the lyrical ballad "Two Worlds," and it set the bar high for the subsequent collaboration. The five elements of Cinque coalesce perfectly on the opening cut, "Conflicting Advice." Here, the muscular yet melodic horns of John Johnson prove the perfect accompaniment to Robi's rippling piano, Joey's signature full-blooded B3 sound, and the deep, percolating jazz/funk rhythms of Steve and Peter. The longest composition, "Saturday Night, Sunday Morning" has two sections, and its title accurately describes its contrasting mood.
Catch A Corner also includes two outside compositions. Cinque take a jaunty musical trip to "Bolivia," updating the Cedar Walton tune, while the album closes out with a fresh interpretation of the Paul Simon hit, "Still Crazy After All These Years." A cool piece of pop music trivia is the fact that Steve Gadd also drummed in the original version.
The album title perfectly mirrors the vibe of making Catch A Corner. To Cardinali, "it means 'let's go find a place to hang out.' This record is about us hanging out, playing and having fun." Peter explains it best when he calls Catch A Corner "a record that came from everybody's head, fingers and heart." Now it's time for you to do your ears a big favour by checking it out.