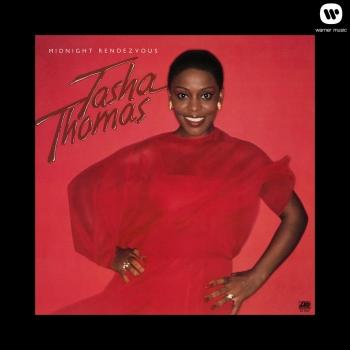 Tasha Thomas
born in Jeutyn, Alaska, the youngest daughter of an Atomic Energy Commission chemist father and a Pentecostal Minister mother, Tasha entered the world of music as an organist and singer in her mother's church. At 16 Tasha left home to pursue her love of singing, traveling from one end of the country to the other she landed in New York City. Through her mother's connections she found a home within the church and quickly became enmeshed in the choir. It was through the choir that Thomas got her first taste of singing pop material when members of the choir were asked to sing on the late Louis Armstrong's last album "What A Wonderful World."
Tasha seeing the possibilities of a career in the secular music field started taking on background vocalist jobs. From the years 1970 to 1978 she amazingly appeared on over 100 albums. Her searing vocals graced such legendary albums as: "Innervision" by Stevie Wonder and "You Are My Starship" by Norman Conners. Her voice was in-demand by artists as diverse as: Teresa Brewer, James Brown, Petula Clark, Jim Croce, Rick Derringer, Roberta Flack, Henry Gross, Phyllis Hyman, Margie Joseph, B.B. King, Al Kooper, Hubert Laws, Looking Glass, Martin Mull, Bette Midler, Pacific Gas & Electric, Esther Phillips, Bonnie Raitt, Carly Simon, Cat Stevens, Mary Travers, Grover Washington Jr., and Johnny & Edgar Winter and she can be heard on their albums!
Her career was doing well, singing in jazz clubs in New York's uptown soul circuit, appearing on "The Merv Griffin Show" and all because of her incredible voice. Her biggest break came not in a recording studio but on a stage. In 1974 she answered an open casting call for "black entertainers, singers, dancers, actors, actresses" for an upcoming Broadway-bound musical. "The Wiz," a re-telling of "The Wizard Of Oz" from an urban prospective, opened on Broadway on January 5th 1975. After the opening prologue by the full cast, the show begins with "Auntie Em" (Tasha) singing "The Feeling We Once Had," the reviews for Tasha and her singing were unanimously favorable and the rest is Broadway history! "The Wiz" was a fertile ground for future "disco" stars. Besides Tasha, the show boasted Stephanie Mills (Dorothy), Dee Dee Bridgewater (Glinda), Evelyn Thomas in the chorus and Luther Vandross wrote "Everybody Rejoice," one of only 2 songs not written by Charlie Smalls for the musical. Tasha stayed with the show for it's entire run, 1,672 performances.
In 1978, based on the strength of her voice, and Broadway status, Tasha was able to secure a record deal with a small independent label. Orbit records recorded and released "Shoot Me (With Your Love)." Atlantic Records picked up the song for national release and the 12" single re-mix took off in the clubs. Her only solo album, "Midnight Rendezvous" was released in 1979. The album had two more 12" single re-mix releases, "Hot Buttered Boogie" and "Street Fever" however neither achieved the status of "Shoot Me." The album also featured several non-disco cuts that showcased her beautiful and rich voice. And naturally she sang ALL the backgrounds on her own album!
After being dropped from Atlantic Records Tasha went back to studio work singing the background vocals that she did so well. In the early 1980's Tasha was diagnosed with cancer and after a long and brave battle she lost her fight with it in 1984. (Source: Discomuseum.net)