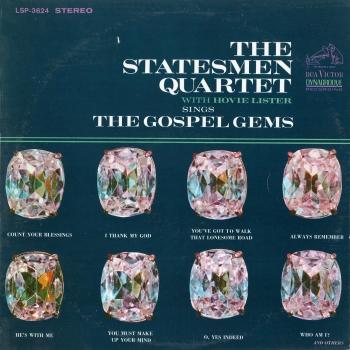 The Statesmen Quartet with Hovie Lister

The Statesmen Quartet
was a southern gospel music group founded in 1948 by Hovie Lister. Along with the Blackwood Brothers, the Statesmen Quartet is considered the most successful and influential gospel quartet of the 1950s.
Hovie Franklin Lister (September 17, 1926 - December 28, 2001) was an American gospel musician, Baptist Minister, and politician. Lister was best known for his time as the front man of the Statesman Quartet, perhaps the most well known and well renowned Southern Gospel quartet in the decades of the 1950s and 60s, and one of the groups of all time.
During the first years, the group underwent several member changes, which included singers like James "Big Chief" Wetherington, Denver Crumpler, Jake Hess, Doy Ott, Hovie Lister, Rosie Rozell, and Jack Toney.
Along with hits spanning many decades, The Statesmen Quartet had many notable successes including being the first Gospel group to receive endorsement deals.[not verified in body] Additionally, they made television commercials, appeared on numerous radio and TV shows, and were signed to RCA Victor before launching their own label, Skylite Records, with The Blackwood Brothers.