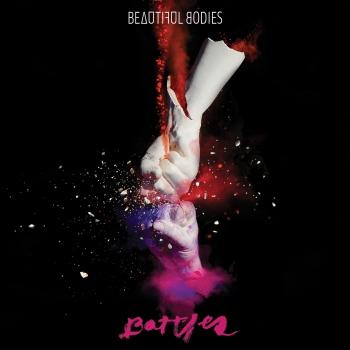 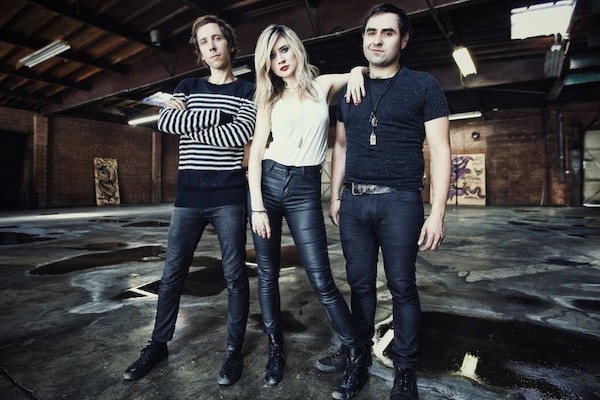 Beautiful Bodies
it all ultimately comes down to one thing: Energy. The Kansas City band’s unapologetically loud-and-hooky music and their fabulously chaotic live shows stem directly from an all-consuming desire to tap into the cosmic power grid, and channel it full-force to the world at large.
When Alicia Solombrino and Thomas Becker first crossed paths five years ago, making music together was the furthest thing from either of their minds. Solombrino was busy singing in her own band, playing keyboards in a self-described “art rock project” with bassist Luis Arana; Becker, a former member of The Get Up Kids and Gratitude and a graduate of Harvard Law School, had chucked his musical aspirations in favor of human rights law — at the time, he was living in Bolivia and suing the country’s former president for human rights violations. But Solombrino’s attractive, high-energy presence and total lack of inhibition (“I don’t give a shit about what anybody else thinks,” she says cheerfully) immediately convinced Becker that he’d found his artistic soul mate.
“I was back in Kansas City on a Christmas break,” Becker recalls, “and Alicia and I went to some hoity-toity art show with a bunch of art snobs. I didn’t know it at the time, but Alicia knows literally every Michael Jackson and James Brown dance — all of a sudden, Michael Jackson’s ‘Thriller’ came on, and she just busted into the entire dance. There are fancy hors d’oeuvres being served, and here’s Alicia doing ‘Thriller’ in the middle of this art gallery. I was like, ‘That girl is fucking awesome. I need to hang out with her!’ That’s seriously what lured me in!”
Long-distance songwriting exchanges commenced immediately upon Becker’s return to Bolivia, and the collaboration — and momentum — built steadily from there as the songs kept coming. “It wasn’t like, ‘We want to have a band that sounds like this!,’” Becker explains. “We had all these different ideas. I was coming from a punk place…” “I was coming from more of a pop-soul place,” adds Solombrino,” but punk as well — like a mixture of Michael Jackson and Blondie together.” “I think Blondie is kind of the perfect example,” Becker agrees. “We wanted to have these hooks that you can sing along with, but also have this raw energy that you can feel and get excited about, especially live.”
One of Becker and Solombrino’s first collaborations, the ringing rocker “You’re a Risk” got picked up by some Kansas City radio stations, which in turn led to airplay at other college and modern rock stations throughout the Midwest; when opening slots for groups like Smashing Pumpkins and My Chemical Romance soon materialized, Becker returned to the United States to joined Solombrino and Arana in as Beautiful Bodies. “We never approached this as a ‘How can we get signed?’ thing,” explains Becker, who continues to pursue legal activism on the side. “It really was an organic thing — at first, we didn’t even live on the same continent! I think because it was so genuine, we were doing what really felt natural and weren’t worried about chasing the carrot or doing what everyone else was doing, I think that ultimately worked in our favor.”
Beautiful Bodies further attracted the attention of audience and industry alike via their raucous live shows that were truly “high impact” in more ways than one. “I have two permanently chipped teeth from our shows, and Thomas has one,” laughs Solombrino. “Scars, bruises, broken toes, you name it!” “But that’s how it’s supposed to be,” adds Becker. “I mean, we’re not like GG Allin, but we’ve gotten kicked off tours because Alicia’s hanging from the fucking bleachers, or I’ve knocked over a wall of amps and am riding a speaker cabinet across the crowd. It’s rad when kids get so stoked that they jump onstage and knock a micstand into your face — that’s the sign of a good show!”
Signed to Epitaph in the spring of 2014, Beautiful Bodies began work with producer John Feldmann (Panic at the Disco, The Used, Neon Trees) at his home studio in Los Angeles. “Day One,” laughs Becker, “he wrote us a text that said, ‘Just so you know, the schedule is 9 am to 3 am everyday.’ And it pretty much was! But when he gets pumped on something, he gets pumped, and you get pumped as well. He’s brutally honest, and he’ll tell you when something’s not good — so when he is stoked on something, that’s pretty validating.”
The sessions with Feldmann produced the five-song EP, War Inside Your Heart, which will be released this fall, and a full-length album that’s slated for release in early 2015. War Inside Your Heart positively crackles with energy, yet the band’s feisty attack never overpowers the melodic charm of songs like “War Inside Your Heart” and “She’s a Blast”. “I kind of feel like the stage and the studio are two separate things,” says Becker. “The Ramones, for example, were a lot poppier on record; live, they played everything 20 BPM faster. You can’t capture a bloody forehead or a chipped tooth in a recording studio — although, if you hear the way Alicia screams on some of these songs, maybe you can!”
Whether playing live or recording in the studio, however, there’s no difference in the contagious level of energy and commitment that Beautiful Bodies brings to their music. Prepare to catch Beautiful Bodies fever.