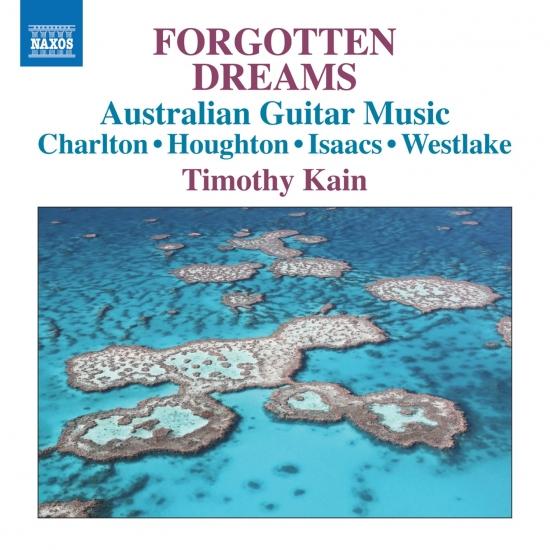 The doyen of Australian guitarists, Timothy Kain, has always encouraged the creation of vibrant new music for the instrument and has worked closely over the years with the four composers presented here. In Richard Charlton’s ‘Sonata of Forgotten Dreams,’ non-standard tunings allow cascade-like harmonics to infuse the music, while Mark Isaacs contrasts jazz-like chords with classical color in Five Bagatelles. Phillip Houghton’s ‘The Goldfish Suite’ brings iridescent color and atmosphere, and ‘Mosstrooper Peak’ is Nigel Westlake’s alternately reflective and energetic solo piece evoking remote locations on the country’s east coast, shrines to the memory of his son.
Timothy Kain, classical guitar 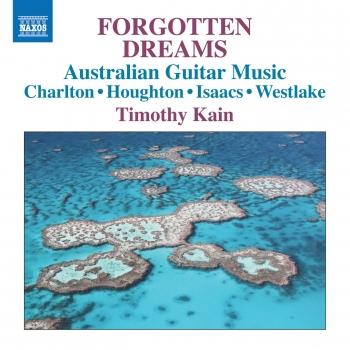 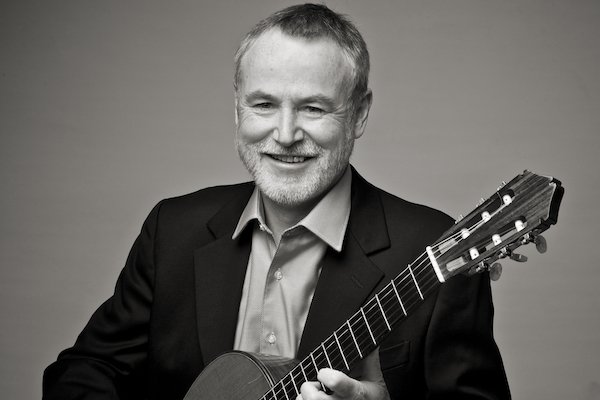 Timothy Kain
Initially inspired by popular music and flamenco to start playing the guitar, Timothy Kain’s first classical guitar lessons were with Sadie Bishop at the Canberra School of Music. After graduating, he lived in Spain and England where he studied with Jose Tomás and Gordon Crosskey, and won first prize in the Third International Guitar Competition in Alicante, Spain, and the Royal Northern College of Music Bach prize.
Tim’s performing and teaching activities have taken him all over the world, building an international reputation both as a soloist and chamber musician. In 1992 he was invited to join John Williams’ seven piece group “Attacca” and subsequently formed a duo with John, touring extensively in the UK and Australia and releasing internationally their award-winning CD, “The Mantis and the Moon” on Sony Classics.
A major focus of Tim’s musical activities has been a long-standing interest and involvement in Australian music. This has seen many fruitful collaborations with some of Australia’s leading composers, and commissions and performances of a large number of solo, chamber and concerto works for the guitar. Many of these have been recorded on the Sony, ABC Classics, Tall Poppies and CSM labels. His solo release, “Mirrors of Fire”, a CD of almost entirely specially commissioned pieces, forms an especially important addition to the catalogue.
Along with a strong commitment to helping build a substantial repertoire of original Australian works for the guitar, Tim has dedicated much of his energy to the nurturing of the next generation of Australian guitarists in his role as Head of Guitar at the Australian National University’s School of Music. A long-term curriculum focus on original Australian repertoire has led to a younger generation of outstanding players also strongly involved in commissioning, performing and recording new Australian works. A large number of Canberra guitar students have achieved success in major national and international guitar competitions, including first prizes in Vienna, Tokyo, Italy, Spain and the USA, amongst others. The majority of graduates from the ANU School of Music have gone on to enjoy successful performing and teaching careers of their own.
Tim has performed and recorded with many of Australia’s leading musicians, including flautist Virginia Taylor (with whom he has recorded four CD’s), David Pereira, David Nuttall, Miwako Abe and Barbara Jane Gilby, as well as concerto performances with all of Australia’s symphony orchestras.
Another major focal point of Tim’s musical activities has been his guitar family quartet, “Guitar Trek”. The pioneering work of this group which began in 1987 has seen the development of a specially made family of guitars of different sizes and an exciting new repertoire for the medium with original Australian music at its heart. Guitar Trek’s strong popular appeal has led to immense success with four best-selling CD’s available on ABC Classics and regular touring both overseas and in Australia. "Six Fish", a CD of original Australian quartets written for the group was released on the Tall Poppies label in 2012, celebrating Guitar Trek's 25th anniversary. Guitar Trek's most recent CD "Serene Nights" was released on ABC Classics in October 2016.