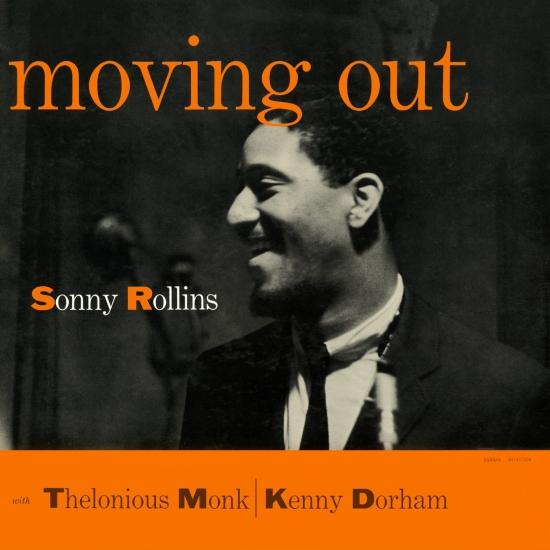 Info for Moving Out (Remastered)

Following on the heels of his magisterial work with Miles Davis on Bags’s Groove, Sonny Rollins entered Van Gelder Studios with a fire-breathing quintet on August 18, 1954, resulting in four of the five selections which make up „Moving Out“. This session might just as well have been titled "Busting Out," because „Moving Out“ represents a breakthrough for Rollins as a bandleader and an improviser.
Rollins really stretches out on the title tune and "Swingin' For Bumsy," playing with a new-found rhythmic command and melodic authority--spreading his wings and flying with Bird-like harmonic declamations, and a dramatic flair all his own. The oft-neglected Kenny Dorham proves a brash soaring foil, but it is the legendary pianist Elmo Hope who really arouses the Heath Blakey axis. Hope's dense, dancing accompaniements prod the soloists into uncharted waters, while his limber, sprawling improvisations represent a singular school of modern piano, occupying a space somewhere between Bud Powell and Thelonious Monk. On the ballad "Silk N' Satin," Hope's brief interlude provides a dark spiritual contrast to Rollins' romantic yearning, while his blues shouts and broad harmonic brushstrokes on "Solid" inspire Rollins to really dig in and shout.
"More Than You Know" is an extra track from one of the sessions which produced Thelonious Monk and Sonny Rollins, and it is a ballad performance of enormous gravity. Under Monk's watchful eye--and thanks in part to the pianist's orchestral manner of feeding the soloist chords--you can hear the saxophonist beginning to move beyond the ballad stylings of Coleman Hawkins and Lester Young, and into a new, more personal realm of rhythmic and harmonic complexity. Meanwhile, Monk's extended solo is a remarkable roadmap of the master's harmonic devices, all in the service of the mood and the melody.
„The collaborations between Sonny Rollins and any given trumpet player were few and far between, but they did include such notables as Miles Davis, Don Cherry, Clifford Brown, and in this case, his first tandem partnership with Kenny Dorham. At the time, both of them were also members of the Max Roach Quintet, and thus quite familiar with each other's strengths. Add to the mix drummer Art Blakey, bassist Percy Heath, and emerging modern jazz pianist Elmo Hope, and this shapes up to be one of the more potent combos of 1954. It's pretty straightforward music featuring Rollins, with little involvement from Dorham except solos. The fast title track, based on the changes of "Donna Lee" or "Indiana," has the briefest melody line before Rollins leaps into eighth-note madness, while the very fleet "Swingin' for Bumsy" does the same, repeating the slimmest phrase three times. An all-time classic, "Solid" does have the two horns together, playing an established, bluesy unison thought, a beauty in economy, while the obligatory ballad "Silk 'n' Satin" is all Rollins wrapped in a fabric of sheen and softness. There's one track that features an entirely different band for some reason, as "More Than You Know" encompasses a full 11 minutes of this program, which in total is just shy of 32 minutes. This unmistakable melody is enveloped by Rollins and Thelonious Monk, with bassist Tommy Potter and drummer Art Taylor in support for a tune that is unlike the others in style and texture. Moving Out contains some fine music, especially for the time period.“ (Michael G. Nastos, AMG)
Sonny Rollins, tenor saxophone
Kenny Dorham, trumpet
Elmo Hope, piano
Percy Heath, bass
Art Blakey, drums
Thelonious Monk, piano (on More Than You Know)
Tommy Potter, bass (on More Than You Know)
Art Taylor, drums (on More Than You Know)
Recorded August 18 and October 25, 1954 at Van Gelder Studio, Hackensack
Produced by Bob Weinstock
Digitally remastered

Booklet for Moving Out (Remastered)