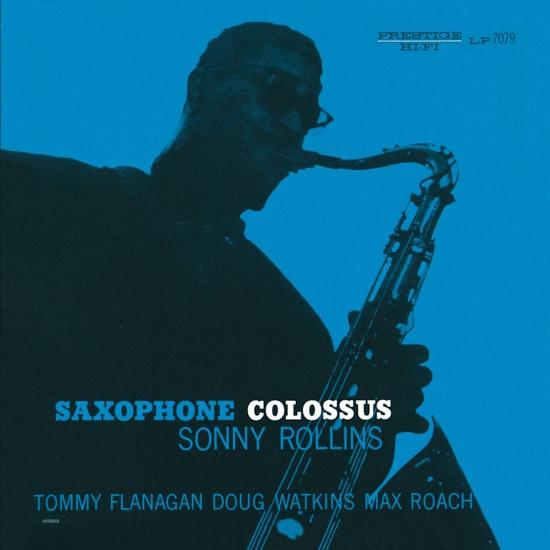 The year 1956 marked a turning point for Sonny Rollins. Out of the ashes of what had been a talented but troubled young tenor saxophonist, came a new Sonny Rollins, his purpose clarified and strengthened, his muse razor sharp and brimming with new visions. As a new member of the Clifford Brown/Max Roach Organization, he was inspired as much by their spiritual consistency as their artistic integrity. By his own admission, even as a jazz tadpole, Sonny Rollins possessed a brawny sound and a powerful rhythmic drive...but other elements were missing.
With „Saxophone Colossus“, Sonny Rollins created a personal vision of the tenor saxophone and modern jazz brimming over with joy and conviction. „Saxophone Colossus“ was a breakthrough recording, praised for its lyrical power, thematic logic, relentless swing and spontaneous invention. Borrowing a page from his West Indian roots, Rollins' 'St. Thomas' employed elements of Caribbean folk melodies and calypso rhythms to create an exotic, dancing tenor anthem--one of the most identifiable, beloved themes in all of jazz--driven along by Max Roach's melodic drumming, Tommy Flannagan's shimmering accompaniment, and the saxophonist's swaggering melodic invention. Rollins displayed fresh harmonic power and innovative methods of thematic development throughout „Saxophone Colossus“.
'The title is not hyperbole....Important as some of his later work has been, the tenor saxophonist's levels of thematic development, assurance, humor and general creative force in „Saxophone Colossus“ remain unequaled....this is an essential album.' (JazzTimes)
Sonny Rollins, tenor saxophone
Doug Watkins, upright bass
Tommy Flanagan, piano
Max Roach, drums
Recorded at the Van Gelder Studio, Hackensack, New Jersey on June 22, 1956
Produced by Bob Weinstock
Engineered by Rudy Van Gelder
Digitally remastered