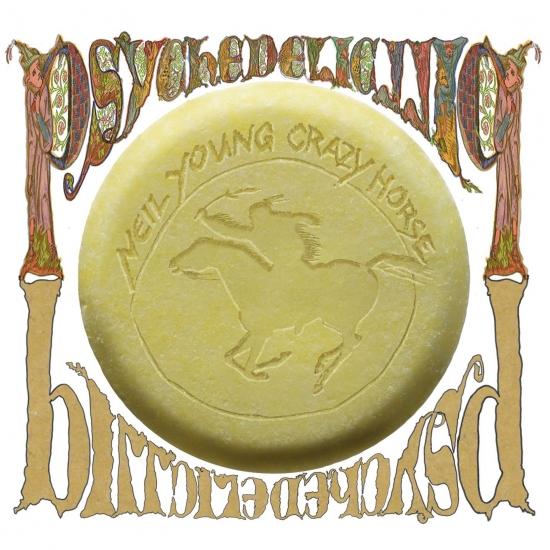 Psychedelic Pill is Neil Young & Crazy Horse's second album of 2012 following Americana.
Neil Young, who began performing as a solo artist in 1960, is still plugging away to bring us a smoldering record that sees him at his best with Crazy Horse.
Whether as a singer, a songwriter or a guitarist, Neil Young has been one of the most influential and important artists of the rock era. Blending folk, country and rock, the acoustic and the electric, the melancholy and the hopeful, Young has been an icon for the uncompromising and unpredictable since the 1960s.
Crazy Horse guitarist Frank "Poncho" Sampedro told Rolling Stone "It's us jamming and having lots of fun... I think that [former Crazy Horse producer] David Briggs would be proud of it... "
"...Right around the time of Americana was finished, I started writing again, so I just kept on going. Pretty soon I had enough songs for a second album." (Neil Young as told to Uncut magazine)
"..The pill, really, is a metaphor for flashbacks. “Driftin’ Back”, in particular, is concerned with what may be the substance of Young’s forthcoming “Waging Heavy Peace”, and the writing of that autobiography. It begins with a brilliant trick – which I won’t spoil just yet – and soon locks into a languorous and beautiful series of solos, erratically punctuated by random Young pensées on the subjects of MP3s, hip-hop haircuts, Picasso wallpaper and so on. It’s not related to the “Horse Back” jam, but it has that same deep-pile pleasure. If you believe, not unreasonably, that Young simply playing the shit out of an electric guitar is about as good as music gets, I think you’ll like it..." (John Mulvey, Uncut)
"An extraordinary record... The next chapter in what has been a compelling last decade of music making." (Uncut Magazine)
"As it turns out, the lumbering Americana was merely an amateurish rehearsal for the reuniting Neil Young & Crazy Horse. Just a handful of months after that collection of schoolhouse folk tunes, the band released the mammoth Psychedelic Pill, Neil's first-ever studio double-LP. It's not just the album itself that sprawls: Young rides Crazy Horse through long, long songs, kicking off the proceedings with the 27-minute "Driftin' Back," a song that makes the nearly 17-minute "Ramada Inn" and 16:30 "Walk Like a Giant" look comparatively svelte. No matter how many three-minute palate cleansers surround these monoliths, there's no getting around the fact that these overdriven, overlong jams are a way of separating the men from the boys, leaving behind only those with the strength to stomach such a large, undiluted dose of the Horse. Fortunately, the band is sounding much more limber than it did on Americana, where it seemed like the group members were picking up their instruments for the first time in a decade, so they can keep things moderately enchanting as the rock rolls out with no end in sight. That heavy, churning, perpetual motion is what's unique about Young & Crazy Horse, and Psychedelic Pill provides an abundance of it, but this feels different than their skronk-fests of the past, lacking the ballast of Ragged Glory, the sinew of Rust Never Sleeps, or the crackling, kinetic energy of Arc Weld or Live Rust. Instead, this is the sound of a veteran band settling into their familiar frayed clothes, doing precisely what they do best and nothing more. An air of tempered nostalgia permeates the album, evident not only in the unapologetic '70s grind of the band but in Young's lyrics, which fuzzily rhapsodize about "Drifting Back" and the first time he heard "Like a Rolling Stone." Unlike Dylan -- or many other of his baby boomer peers -- Young sounds like a defiant old coot pining for his past, which makes Psychedelic Pill yet another oddity in a catalog filled with them: it's noise rock as comfort food." (Stephen Thomas Erlewine, AMG)
Digitally remastered