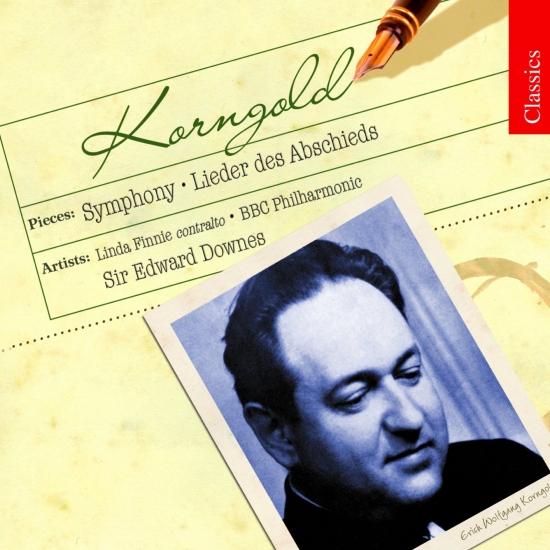 This album offers the Symphony in F sharp major, which ranks alongside Mahler and Bruckner in the symphonic repertoire, coupled with the gorgeous, yet rarely performed Lieder des Abschieds, a cycle of four orchestral songs. These works are performed by the BBC Philharmonic conducted by Sir Edward Downes with Linda Finnie as the contralto soloist. The disc was a Gramophone magazine critics’ choice when it was first issued the reviewer said at the time, ‘Downes’s insightful reading (and the BBC Philharmonic’s impeccable playing) is all that the discerning Korngold collector could wish, especially when coupled with Linda Finnie’s rapt and majestic account of the Lieder des Abschieds cycle’.
"The BBC Philharmonic play with enthusiasm and sensitivity for Sir Edward Downes." (Penguin Guide)
"Korngold’s lush orchestration needs sound with a full bloom, and the Chandos engineers provide that in spades." (The Times)
Linda Finnie, contralto
BBC Philharmonic
Sir Edward Downes, conductor 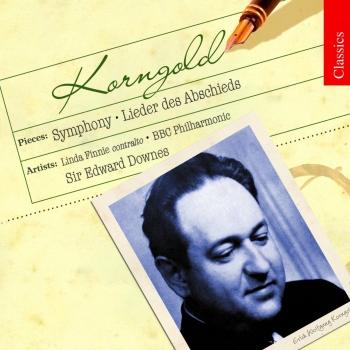 Linda Finnie
was born in Scotland and studied at the Royal Scottish Academy of Music and Drama and the Royal Academy of Music. Winner of the Kathleen Ferrier Memorial Award in Great Britain, she also won the Kathleen Ferrier Prize in the ’s-Hertogenbosch International Competition.
She has sung with all the major British opera companies and performed at venues in Europe, Australia and New Zealand, in Tokyo and Singapore, and at the Bayreuth Festival over five seasons, in roles such as Eboli (Don Carlos), Amneris (Aida), Brangäne (Tristan und Isolde) and Waltraute (Götterdämmerung). As a concert artist she has worked with many of the world’s leading orchestras. Linda Finnie’s recordings on Chandos include works by Bliss, Diepenbrock and Respighi, as well as song cycles by Mahler, Mendelssohn’s Elijah, Elgar’s Sea Pictures and The Light of Life, and Prokofiev’s Ivan the Terrible (winner of the Deutsche Schallplattenpreis).