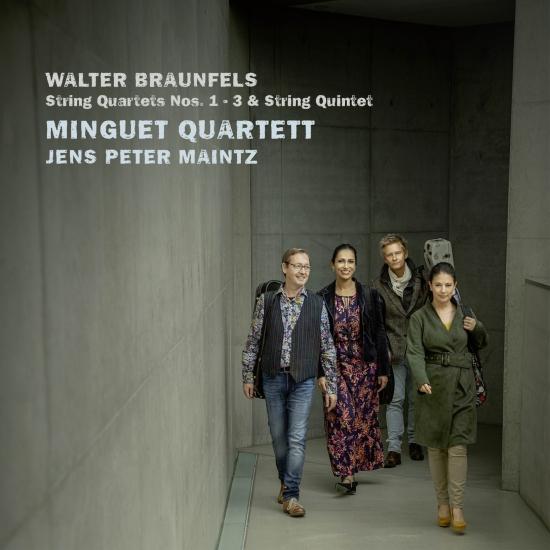 With this complete recording of the string chamber music of Walter Braunfels, the Cologne Minguet Quartet pays tribute to this composer, who had a decisive influence on the educational potential of young musicians, especially in Cologne, in the period between the two world wars. After the highly esteemed and celebrated composer and pianist followed the call of the Ministry of Culture to found the second Prussian Academy of Music in Cologne, he worked there as president and university teacher from 1925 to 1933.
Then he, the half-Jew, was dismissed from all his posts regardless of his previous merits. The outlaw went into internal emigration and moved to Überlingen on Lake Constance. If the "spiritual exile" still seemed somehow bearable, the final end followed in 1938: public concerts were banned by decree. This blockade meant the total restriction of artistic work and the deprivation of that time- and space-consuming sounding board that creative musicians so urgently needed.
"Since Cologne is the home of the quartet as well as of the station and the label, it seemed more than obvious to all involved to create a complete recording of this composer and pedagogue who was so important for the city in the years 1925-1933."
“Analysis obviously cannot seize the essence. […] If my music has meaning, it does not lie in the musical material itself, but beneath it: in the artistic approach and its relationship with my world view.” (Walter Braunfels).
Walter Braunfels wrote his first two string quartets in 1944; they were followed after the war by the String Quintet (1946/47), the Third String Quartet (1946/47), and the new Final Movement composed for the latter (1953). All these works meet the highest standards in terms of transparent voice leading, closely knit polyphony, and boldly expanded tonal harmony. In 1933 he was dismissed from all posts, regardless of his merits, because he was half Jewish. Braunfels was restored to his post of director at Cologne Conservatory in 1945. . Braunfels was swimming against the tide: profoundly rooted in the Classical-Romantic tradition, his style was deemed inconvenient in the face of prevalent postmodern tendencies in the first years after the war.
Minguet Quartet 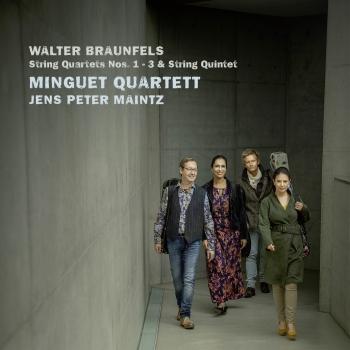 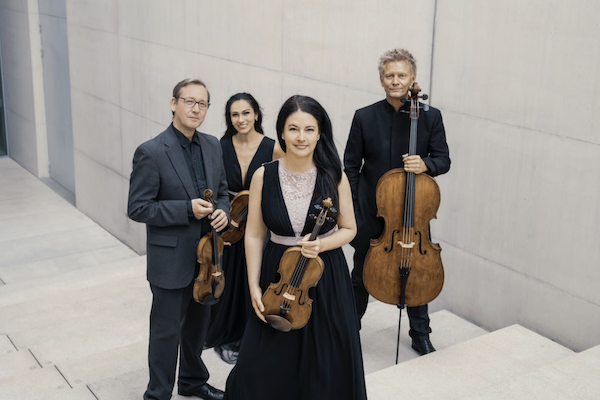 The Minguet Quartet
founded in 1988, is one of the most internationally sought-after string quartets today and gives guest performances in all the great concert halls of the world. The passionate and intelligent interpretations of the Minguet Quartet always ensure inspiring listening experiences – “for the joy in sound and expression with which the ensemble makes the works speak enlivens even the smallest detail”. (Frankfurter Allgemeine Zeitung)
The namesake of the Quartet is Pablo Minguet, a Spanish philosopher of the 18th century who attempted, in his writings, to facilitate access to the fine arts for all sectors of the population – and this idea is a chief artistic concern of the Minguet Quartet touring for concerts around the whole world.
The Minguet Quartet performed at the Salzburg Festival 2020 and 2021. Further stations of the season 2020/21 have been concerts at the Cologne Philharmonie, the International Brucknerfest Linz and the Rheingau Musik Festival. Future projects in 2021/22 include concerts at BOZAR Music Brussels, the Meistersingerhalle Nürnberg, Alte Oper Frankfurt, the Théâtre des Abbesses Paris and Festspiele Herrenchiemsee.
In 2019/20 the Minguet Quartet was guest at Grafenegg Festival, Schwetzinger Mozartfest, International Stiftung Mozarteum Salzburg, Festival Ultraschall Berlin and De Doelen Rotterdam. Furthermore a tour to the USA with focus on a concert in Washington DC took place. 2019 has begun with a performance at the Kammermusikwoche Schloss Elmau, followed by concerts at Lincoln Center New York, SouthBank Centre London, Konzerthaus Vienna, the newly opened Philharmonie Skopje, Nymphenburger Sommer in Munich, Mozartfest Würzburg and the International Schubert-Fest Dortmund. 2018 the quartet performed at the Elbphilharmonie Hamburg, Beethovenfest Bonn, Schwetzinger Festspiele, Badenweiler Musiktage, at EuroArt Prague and the Mosel Musikfestival, and was lecturer ensemble in residence at the Hochschule für Musik und Tanz Köln. Previous seasons took the Minguet Quartet to the Berlin Philharmonie, Konzerthaus and Staatsoper, Alte Oper Frankfurt, Muziekgebouw Amsterdam, the Library of Congress Washington DC, The University of Hong Kong, Festival d'Automne Paris, Tongyeong International Music Festival Korea and to further concert halls and festivals within Europe, Japan, Central and South America, Canada and the USA.
The ensemble concentrates on the Classical-Romantic literature and modern music in equal measure, and has proven its commitment to compositions of the 21st century through numerous premieres. Encounters with important composers of our time inspire the four musicians to create ever new ideas in programming. The first complete recordings of the string quartets by Wolfgang Rihm, Peter Ruzicka and Jörg Widmann are amongst their most important projects. For the 70th birthday of Manfred Trojahn a recording including the first performance of his second string quartet with clarinet and mezzosoprano after poems by Georg Trakl was released in 2019 (wergo), followed by a portrait CD of the composer Konstantia Gourzi in 2020 (ECM). Outstanding highlight of the last years was the performance of Karlheinz Stockhausen’s Helicopter String Quartet as part of a conception by the conductor Kent Nagano.
Program topics of the years 2022-24 will be amongst others the significant birthdays of Wolfgang Rihm, Johann Wilhelm Wilms, György Ligeti, Jörg Widmann, Anton Bruckner, Josef Suk, Arnold Schönberg and Luigi Nono.
Partners of Minguet Quartet include the soprano Juliane Banse, mezzosoprano Tanja Ariane Baumgartner, the clarinetist Matthias Schorn, the pianists Claire Huangci and Michael Korstick, the violinist Franziska Hölscher, the violist Gérard Caussé, the cellist Jens Peter Maintz and the bandoneonist Victor Villena. As solo quartet the Minguet Quartet played with the WDR Rundfunkchor, the DSO, the Radio Symphony Orchestras of SR, hr, WDR and ORF, with the Brucknerorchester Linz and the Nürnberger Symphoniker under the conductors Jukka-Pekka Saraste, Markus Stenz, Peter Ruzicka and Ilan Volkov.
With the complete CD recordings of the string quartet literature of Felix Mendelssohn Bartholdy, Josef Suk and Heinrich v. Herzogenberg (cpo), the ensemble proudly presents its great musical culture, opening up to the public the discovery of impressive music of the Romantic period. In 2020 a recording with string quartets by Emil Nikolaus von Reznicek was released. In the upcoming years the Minguet Quartet will record the complete work for chamber music by Heinrich Kaminski and Walter Braunfels, music by Alberto Evaristo Ginastera and the unique string quartet by Glenn Gould.
In 2010 the Minguet Quartet was awarded the coveted ECHO Klassik followed by the Diapason d'Or in 2015 and the scholarship RELOAD by the Kulturstiftung des Bundes, Germany, in 2020. As an important cultural mediator the Minguet Quartet was selected in 2022 for the realization of the project „EifelKlang“ in cooperation with NEUSTART KULTUR - Die Beauftragte der Bundesregierung für Kultur und Medien.