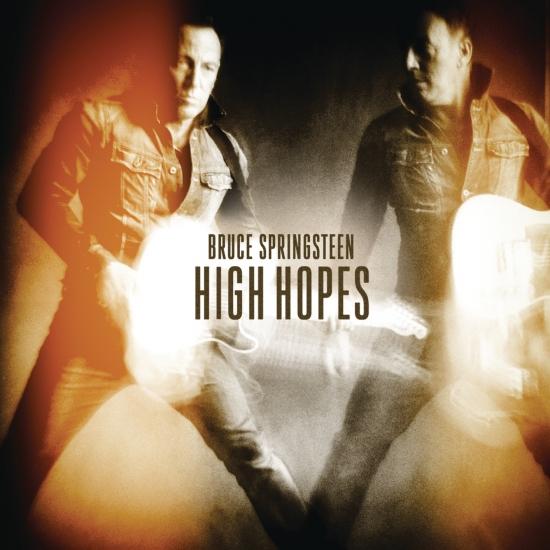 High Hopes is the 18th studio album by American recording artist Bruce Springsteen, released January 14, 2014, on Columbia Records. The album was Springsteen's 11th #1 album in the United States, placing him third all-time for most No. 1 albums only behind The Beatles and Jay-Z. It was his tenth No. 1 in the UK, putting him joint fifth all-time and level with The Rolling Stones and U2. Rolling Stone named it the second-best album of 2014 on their year-end list.
The album features Springsteen's regular backing band, the E Street Band, plus guitarist Tom Morello. Contributions from deceased E Street Band members Clarence Clemons and Danny Federici are also included. Co-produced by Ron Aniello, Brendan O'Brien and Springsteen, the album was preceded by the single "High Hopes," and is a collection of cover songs, out-takes and re-imagined versions of tracks from past albums, EPs and tours. A music video for "Just Like Fire Would" was released January 22, 2014. A music video for "The Wall" was aired during the 2014 HBO special, Bruce Springsteen's High Hopes. On July 9, 2014, Springsteen released a short film for "Hunter of Invisible Game" which marked his directorial debut.
Springsteen said that the new music was "some of our best unreleased material from the past decade" and among the best of his writing and deserved a proper studio recording. In April 2014, Springsteen released American Beauty, a four-track EP of songs that did not make the final cut of High Hopes.
"There isn't another Bruce Springsteen album like High Hopes. Cobbled together from covers -- of other songwriters along with the Boss himself ("American Skin [41 Shots]" and "The Ghost of Tom Joad" are both revived) -- and outtakes from the last decade, High Hopes doesn't have the cohesion or gilded surfaces of Wrecking Ball, but neither is it quite a clearinghouse of leftovers. Inspired in part by Rage Against the Machine guitarist Tom Morello, who has proven to be a brother in arms to Springsteen, as well as a substitute for Steven Van Zandt in the E-Street Band, High Hopes certainly bears the proud stamp of Morello, both in its workingman's politics and in its cinematic sound. Much of this record oscillates between the moody and militant, particularly in the politically charged numbers, which are often colored by percussive guitar squalls. Here, the RATM guitarist often resembles a Nils Lofgren stripped of blues or lyricism -- think of the gusts of noise on "Tunnel of Love" without any melodicism -- and that's a bracing change for Springsteen, who has shown interest in atmospherics but usually when they're coming from keyboards, not six strings. Such sociological talk suggests High Hopes is nothing but rallying cries and downhearted laments, but the fascinating thing about this unkempt collection is how these protest songs and workingman's anthems are surrounded by intimate tunes, ranging from a cover of the Saints' latter-day "Just Like Fire Would" to a strangely soothing interpretation of Suicide's "Dream Baby Dream." Morello reportedly had as much to do with the inclusion of these covers as he did with the record's set pieces -- a stirring "The Ghost of Tom Joad," "American Skin" (which can't help but seem like a reference to the 2012 shooting of Trayvon Martin in this context), and "High Hopes," a Tim Scott McConnell song first recorded in the '90s -- and there's a certain sober passion that ties all these songs together but, in turn, it makes the rest of the record all the more compelling because the pieces simply don't fit. There's the rousing Gaelic rock of "This Is Your Sword," sounding a bit like a rejected closing credit theme for The Wire; "Down in the Hole," which rides the same train-track rhythm as "I'm on Fire;" the complicated waltz of "Hunter of Invisible Game," softer and stranger than much of the rest here; "Harry's Place," a bit of synthesized Sopranos noir that sounds much older than its ten years; and the absolutely glorious "Frankie Fell in Love," as open-hearted and romantic a song as Springsteen has ever written. Strictly speaking, these 12 songs don't cohere into a mood or narrative but after two decades of deliberate, purposeful albums, it's rather thrilling to hear Springsteen revel in a mess of contradictions." (Stephen Thomas Erlewine, AMG)
Bruce Springsteen & E-Street Band