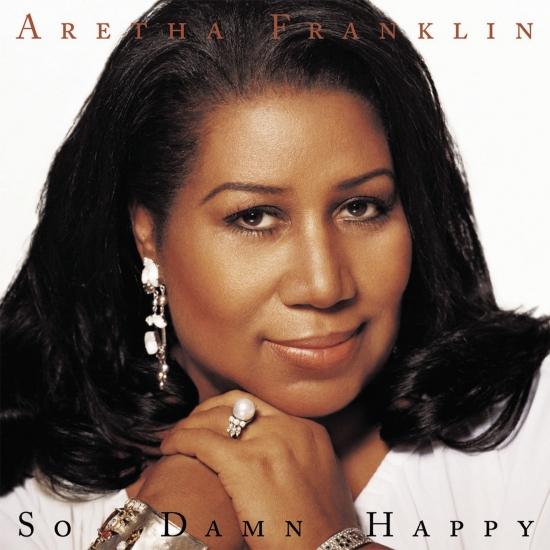 Info for So Damn Happy

„So Damn Happy“ was nominated for the 2004 Grammy Award for Best R&B Album. "Wonderful" won for Best Traditional R&B Vocal Performance. Aretha Franklin released only two new albums in the 1990s, but 2003 saw a flurry of activity, with Franklin putting out both the gospel album One Lord, One Faith, One Baptism and this secular R&B album.
Her voice sounds as vibrant as ever, and most of the songs have a joyful feel that's no doubt influenced by the depth of Franklin's faith. The soft-grooving "Wonderful" and the slow-burning soul of the title track bespeak an inner jubilance, but this album isn't emotionally monochromatic. She gracefully plumbs the depths of disillusionment on the Burt Bacharach-produced/penned slow-jam "Falling Out of Love" and the remonstrative "Ain't No Way," where she even references her legendary hit "Respect."
Still, it's no accident that things close on a decidedly spiritual note with the celebratory "Good News" and a reprisal of "You Are my Joy," a wedding song that--like Aretha herself--seems to have a direct link to the divine.
„There's very little this reviewer can say about the undisputed "Queen of Soul", that a thousand haven't already. In a career spanning four decades and some fifty plus albums, Aretha is the epitome of soul, whilst never straying too far from her gospel roots. In recent times her recording output has slowed considerably, although thankfully the quality has never waned. This, her first studio album in five years since A Rose Is Still A Rose, (and her twelfth for Arista) she again reaffirms why today's pretenders to her crown can only look up and marvel at her boundless talent.
Mary J. Blige handles vocal arrangements and back-up on two songs she co-wrote - the optimistic two-stepper "Holdin' On" and the beat ballad "No Matter What". On the latter Franklin wrings more soul out of one she-be-do than all the aspirants put together. Production, similarly, has a classic contemporary-feel with credits falling to hit men Jimmy Jam & Terry Lewis, Barry J. Eastmond (whose credits include Anita Baker, Freddie Jackson), Troy Taylor (Whitney Houston), Ron Lawrence (Faith Evans) and the legendary Burt Bacharach; Aretha herself producing three tracks.
The album's first single, "The Only Thing Missin'", oozes of '70s charm, street savvy and feel-good vibe, and is very much a personal statement reflecting her own stance on matters of the heart: "I'm just telling it like it is and keeping it real," Aretha states.
The Jam & Lewis cut, "Everybody's Somebody's Fool", a feisty tale of love gone bad, similarly smacks of classic Franklin and has a certain Bobby Womack charm to it - unassuming yet naggingly catchy and oozing of familiarity. "So Damn Happy" sounds as if it draws from Natalie Cole's "This Will Be" as subtle acoustic strumming and splashes of blues-spiced horns surround her intimate vocal. In fact, the balance between the contemporary and the classic is what makes So Damn Happy such an accessible release - perfectly highlighted on the heartfelt "Ain't No Way". When she sings: "I need a little R-E-S-P-E-C-T when you find out what it means to me", you can't help but smile at the reference.
Aretha's voice is a beautiful instrument that she never stops strengthening and developing and in So Damn Happy her legion of fans have a slick and superior album of depth, vision and soul that's truly one to savour.“ (Jack Smith, BBC Review)
Produced by Jimmy Jam & Terry Lewis, Barry Eastmond, Gordon Chambers