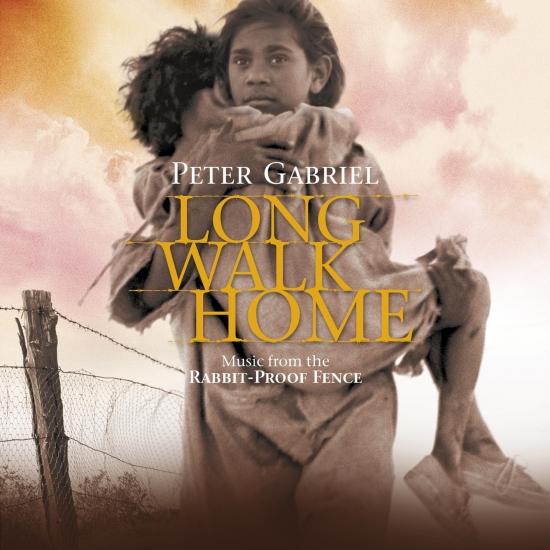 Long Walk Home is an album based on the music from the film Rabbit Proof Fence. Written and produced by Peter, the album is the end result of two years work with the film’s director Phillip Noyce and brings together a multitude of different musical origins, cultures, instruments and vocalists.
For the album Peter worked with long-term collaborators David Rhodes, Richard Evans and Shankar and features a host of musicians from around the world including Manu Katché, The Blind Boys of Alabama and the late Nusrat Fateh Ali Khan. There are influences and elements from Asian, African, Caribbean, Australian and Middle Eastern music.
From the didgeridoos, the surdos and the pulsating rhythms of the Dhol Foundation to laments over drum and bass and haunting string sections the album is a multi-layered well of different tones, sounds and musical landscapes
“It was a small, independent heart project Phillip Noyce was working on and I thought the story was really strong. It was going to be an open canvas without huge amounts of dialogue and with a lot of room for atmospheric music, so it was attractive to me in many ways.
When I first met up with Phillip one of the ideas I proposed to him was that we build up a lot of soundtrack from natural sounds he would have recorded as he was shooting the film. I pictured them making this amazing journey along the rabbit proof fence without a whole lot of man-made noises to distract them so it was what the world around them – the natural world – was generating which would have been their soundtrack.”
Phillip Noyce had begun his directorial career with a ground-breaking film about Aborigines in the 1970’s. For Rabbit Proof Fence he returned to the Australian outback to film this amazing true story of three Aboriginal girls who walked 1,200 miles across the desert to get back to their mother, from whom they had been snatched.
In the film Kenneth Branagh plays the part of the A. O. Neville, an English administrator given the incongruous title of ‘Chief Protector of the Aborigines’. From 1915 to 1940 Neville was the legal guardian of all Aborigine people in the vast deserts of Western Australia.
In 1931, 14 year old Molly Craig and her two young sisters were dragged from their mother and taken to the Moore River settlement, where there were forced to learn domestic skills to serve the white population and required to forget their own culture.
These three girls were just three of thousands of Aborigines now known as the ‘stolen generation’, forcibly taken by the authorities or given up by their mothers to be brought up in white society – a traumatic practice that continued, remarkably, until as recently as the 1970’s.
However, Molly and her sisters escaped. They outwitted the Aboriginal tracker sent to find them and found their way home by following the rabbit proof fence – a huge barrier stretching from the North Coast of Western Australia to the South. The fence had been erected in an attempt to prevent the spread of rabbits across Australia.
Peter Gabriel, piano, keyboards, vocals, surdu, drum programming
Richard Evans, Hammered Dulcimer, 12 string guitar, piano
David Rhodes, guitar, surdu, percussion, keyboard bass, clap sticks, didgeridoo, vocals
Manu Katché, drums, percussion
Jerzy Bawol, accordion
Chuck Norman, keyboards
Tomasz Kukurba, violin
James McNally, bodhrán
Babacar Faye, djembe
Assane Thiam, talking drum
B'Net Houariyat, vocals
Myarn Lawford, vocals
Ningali Lawford, vocals
Sheryl Carter, vocals
Produced by Peter Gabriel
Digitally remastered