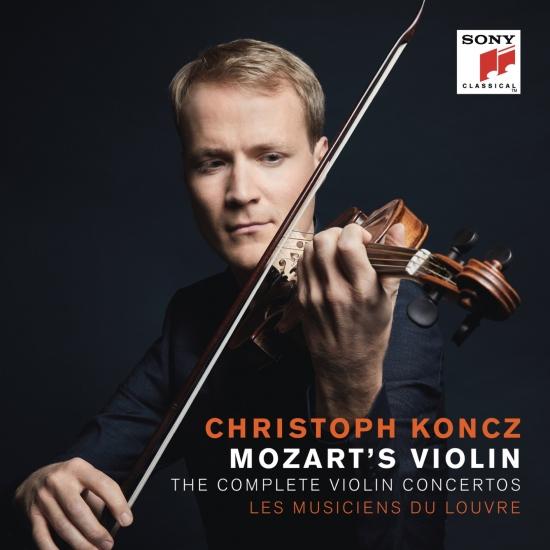 It was an awakening experience when Christoph Koncz, principal violinist of the Vienna Philharmonic and conductor, first held Mozart’s original concert violin in his hands. This was the violin on which Mozart had played as concertmaster in the Salzburg Hofkapelle: a Baroque violin that was carefully preserved after Mozart’s death and treated almost as a holy relic. The idea of recording Mozart’s five violin concertos for the first time on the composer’s own concert violin was one that Christoph Koncz found irresistibly fascinating. “There’s a close connection between these concertos and this instrument, and Mozart’s own experience of this violin undoubtedly inspired him greatly. In his violin concertos he was fond of using the instrument’s upper tessitura and coloratura register, which is where his violin sounds particularly beautiful.” (Christoph Koncz)
Christoph Koncz, violin
Les Musiciens du Louvre 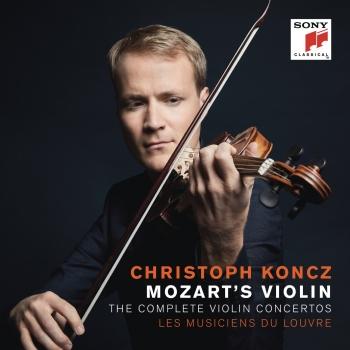 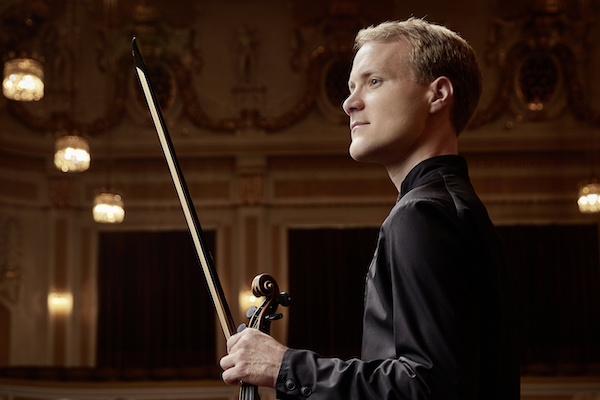 Christoph Koncz
Highly versatile 32-year-old musician Christoph Koncz enjoys a wide-ranging international career as a conductor, violin soloist, chamber musician and principal violinist of the Vienna Philharmonic.
Christoph Koncz is rapidly establishing himself internationally as a conductor. His conducting debut at the 2013 Salzburg Mozartwoche was followed by concerts at such prestigious venues as the Berlin, Cologne and Munich Philharmonie, Vienna Konzerthaus and KKL Lucerne as well as at the Salzburg Festival. In 2017, Christoph Koncz made his US conducting debut with the Memphis Symphony and conducted the Tonhalle-Orchester Zürich in a masterclass with David Zinman. He made his subscription debut at the Cologne Philharmonie with Concerto Köln in June 2018 and took the Orchestre Métropolitain de Montréal on tour in March 2019. During the ongoing season Christoph Koncz will make his opera debut at the Berliner Staatsoper Unter den Linden (Gluck: Orfeo ed Euridice) and appear for the first time with the Orchestre de la Suisse Romande (Tchaikovsky, Brahms) and the Hong Kong Philharmonic (Schubert, Weber, R. Strauss). He will return to the Philharmonia Orchestra London and conduct the Royal Northern Sinfonia’s New Year’s Concerts.
Christoph Koncz is in his second season as Chief Conductor of the Deutsche Kammerakademie Neuss am Rhein and will perform with the orchestra at the Concertgebouw Amsterdam (Mendelssohn, Beethoven). He has recently been appointed Principal Guest Conductor of the renowned French period instrument ensemble Les Musiciens du Louvre, with whom he has recorded the complete Mozart Violin Concertos on the composer’s own violin for the first time.
Born in 1987 in Konstanz into an Austrian-Hungarian family of musicians and raised in Vienna, Christoph Koncz received his first violin lesson at the age of four and entered the Vienna University of Music only two years later. At the age of just nine, he received worldwide acclaim for starring as child prodigy Kaspar Weiss in the Canadian feature film The Red Violin, which won an Academy Award for Best Original Score.
In addition to his violin studies, he also enrolled in the conducting class of Mark Stringer in 2005. Master classes with Daniel Barenboim and Daniel Harding further enriched his musical education. Much in demand as a chamber musician, his musical partners include Leonidas Kavakos, Joshua Bell, Vilde Frang, Renaud Capuçon, Antoine Tamestit, Kim Kashkashian, Gautier Capuçon, Andreas Ottensamer and Rudolf Buchbinder.
In 2008, at the age of twenty, Christoph Koncz was appointed principal second violin of the Vienna Philharmonic, a position he has held since. He plays the 1707 ex Brüstlein violin by Antonio Stradivari on generous loan by the National Bank of Austria.