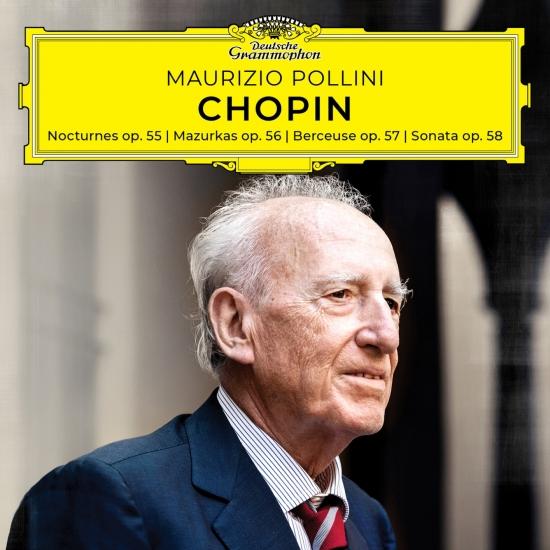 Frédéric Chopin made his name in the high-society salons of his native Poland and, above all, in the vibrant Paris of Eugène Delacroix, Victor Hugo and George Sand. His pieces for solo piano, often technically challenging, always enchanting, are in constant global demand today, especially when brought to life by a performer of Maurizio Pollini’s stature. The 76-year-old Italian musician has been in love with Chopin’s art since
childhood, a passion clear in his critically acclaimed recordings of the composer’s works for Deutsche Grammophon. Maurizio Pollini – Chopin, set for international release on 25 January 2019, embraces a lifetime’s dedication to the composer and complements Pollini’s much praised 2017 album, Chopin – Late Works, opp.59–64.
Maurizio Pollini, “the pre-eminent Chopinist of his generation” (Fanfare), continues his revelatory chronological re-exploration of the Polish master’s late works.
Here are the pianist’s latest thoughts on Opp. 55–58 (1843/4), including the B minor Sonata and Berceuse. “An indispensable album for all devotees of the composer or the pianist” (ResMusica) [review of Pollini’s “Chopin: Late Works”, Opp. 59–64]
"Pollini, explicitly recorded but with air around the instrument, opens with an aristocratic account of the Barcarolle (Chopin at his greatest) and continues with the Opus 59 Mazurkas, from which the A-flat is especially wistful (its endearing melody shaped perfectly) whereas the F-sharp minor is fiery, its knotty decorations made lucid." (Classical Source) [review of Pollini’s “Chopin: Late Works”, Opp. 59–64]
Maurizio Pollini, piano