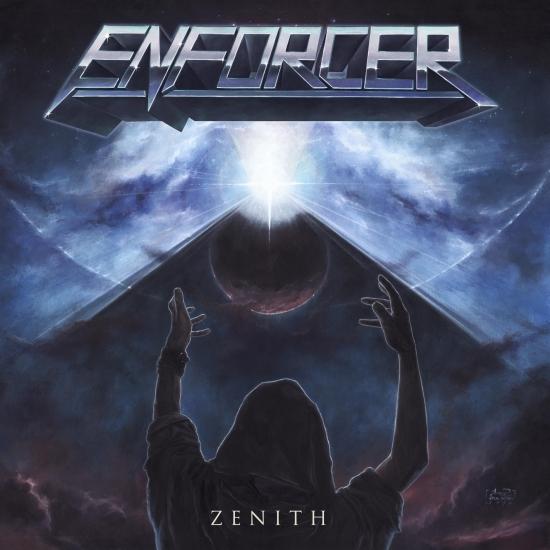 “We do whatever we want and feel totally free when it comes to composing songs,” asserted vocalist & guitarist Olof Wikstrand of Swedish metallers ENFORCER in 2015 - and he was completely right, not only musically but also touring-wise. Their 2015 album »From Beyond« - the critically-acclaimed follow-up to »Into The Night« (2008), »Diamonds« (2010), and »Death By Fire« (2013) - led to tours with bands like DESTRUCTION, FLOTSAM AND JETSAM, NERVOSA, WARBRINGER, and CAULDRON among others, not to mention acts as diverse as DARK TRANQUILLITY and SWALLOW THE SUN. And with »From Beyond«, they even made it into the German album charts for the first time ever (#84).
Let’s head back to the present: There’s never been 4 years between two ENFORCER records, but remember ‘Soon ripe, soon rotten’! “The first thing we agreed on, even before we had any songs for »Zenith«,” explains Olof, “was to just not do another ‘album’ but to do the biggest heavy metal album of all time without any type of limitations. The new album »Zenith« is definitely the most ambitious project we ever engaged ourselves in. I think all together we spent over two and a half years to write, produce and record it all,” he confirms. “That‘s why we made ourselves scarce on the world’s stages for a while too.” Once again recorded and produced by ENFORCER themselves, the drums have been recorded at Soundtrade Studios, Stockholm whilst the rest of the tracking was completed at Hvergelmer Studios, Arvika, including new permanent guitar player Jonathan Nordwall. Their new approach is also reflected in the album artwork, which was created by Italian artist Velio Josto. The quartet have simply refused to be pigeonholed since they formed in Arvika, Sweden in 2004.
»Zenith« will, of course, bring joy to fans of fast-paced heavy metal hymns ('Searching For You', 'Thunder And Hell'), but the record offers way more: the band’s new more epic approach delivers gems like the opening stomper 'Die For The Devil'. 'Zenith Of The Black Sun' starts off quite laid-back before speeding up towards an enormously melodic, playful outro. Track 4, 'Regrets', surprises with its little short romantic piano intro turning into a mesmerizing, unforgettable stadium rock anthem. Up next is 'The End Of A Universe', another haunting, but definitely crushing piece, with the next stunner named 'Sail On' right around the corner, twisting the listener around its finger secretly. Orchestral elements garnish the follow-up 'One Thousand Years Of Darkness' and unveil another previously unheard side of the group. Marching drums call time on »Zenith« before the quartet 'Forever Worship The Dark' on track no. 9. The near 7 minute, brooding then crushing 'Ode To Death' finally rounds off this varied record…
With their 5-record song arsenal, extended by ten tracks like only ENFORCER can craft them, the band is about to expand its audience once again by conquering the stages all around the globe. Appearances at prestigious festivals are confirmed, but there’ll be way more shows, that’s for sure! “Wherever you are, beware the 'Zenith Of The Black Sun',” Olof promises.
Olof Wikstrand, vocals, guitar
Jonathan Nordwall, guitars
Tobias Lindqvist, bass
Jonas Wikstrand, drums, piano, keyboards 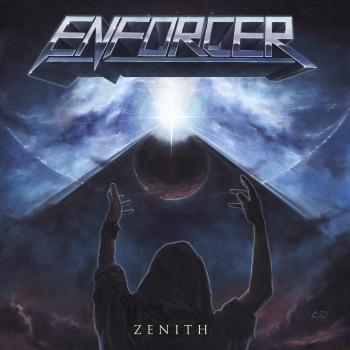 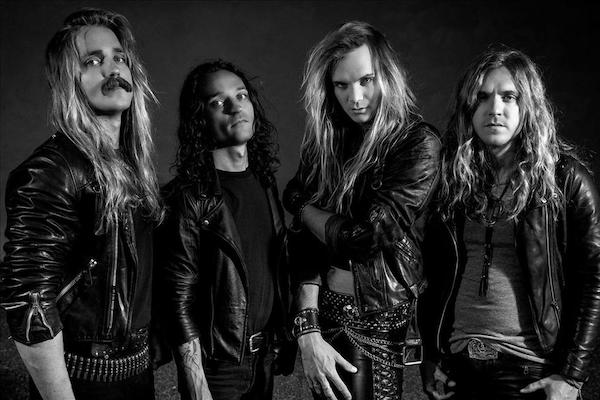 ENFORCER
are the leaders of a new generation of metal bands that remain true to the roots of metal in terms of setting, sound and appearance. A hint towards modern bands, as they were particularly mid-00s-years popular. The band was founded in 2004 in Arvika, a small town in Sweden far away from everything. With the release of their debut album "Into The Night" late 2008, Enforcer stated their opposition to the trend of over-produced, plastic-sounding albums with tons of tracks and triggered drums. "Into The Night" was a pure metal album in the tradition of acts such as Exciter, Agent Steel and Anvil.
Enforcer toured through Europe and the USA alongside acts like Portrait and Cauldron, and also performed at festivals such as Bang Your Head, Keep It True or the legendary Sweden Rock just to name a few. With this incredible live energy and an overwhelming feedback in mind, Enforcer wrote in 2009 the successor of "Diamonds" and went back to the studio with famous Swedish producer Rikard Lofgren at the end of the year. And the five metalheads actually managed to outdo their debut. "Diamonds" appears like a heavy metal album that sounds exactly as it should sound!