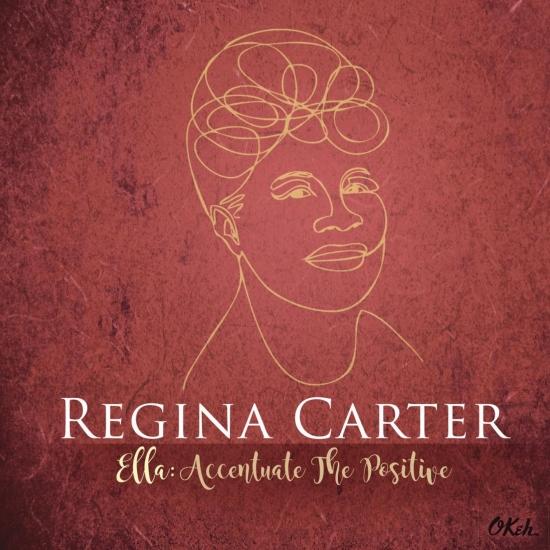 Info for Ella: Accentuate the Positive

A hundred years after her birth, the ever-eloquent Ella Fitzgerald continues to teach us lessons. Regina Carter has chosen this moment to celebrate the First Lady of Song’s infectious and inclusive artistry with unabashed joy. “Accentuate the Positive, I thought was the perfect title considering the mood of the country and the world right now,” Ms. Carter says. “We need some positive vibes.”
On Ella: Accentuate the Positive, out April 21 from OKeh/Sony Music Masterworks, the virtuoso violinist reveals the many faces of Fitzgerald that have influenced Carter’s own remarkable path in music. Apart from the title track of Accentuate the Positive, Carter resists the allure of the songstress’ most recognizable hits. Carter has mined tunes from deep within Ella’s bountiful catalogue, and brought them to the surface with a distinct freshness. The reward is rich for the listener.
“One of the many things that I adore about Ella is that she just loved music and didn’t box herself in,” Carter explains. “She recorded everything, not just the American Songbook — doo-wop, Stevie Wonder and Beatles songs, even some country western music. The fact that she experimented with so many different styles made me feel that, with this record, I would pay respect to her by taking the music and doing something else with it. I feel that she would smile in agreement.”
To realize her vision of the album, which transforms the songs through a lens of classic 1950s-’60s soul and blues, Carter calls on an impressive roster of musicians and arrangers. The violinist is accompanied by her longtime rhythm section of bassist Chris Lightcap and drummer Alvester Garnett, and is joined by pianist Xavier Davis and guitarist Marvin Sewell. Both Lightcap and Sewell serve double-duty as arrangers.
This talented group is supplemented by in-demand bassist Ben Williams, producer and hitmaker Ray Angry, renowned vocalist Charenee Wade and pianist Mike Wofford, Fitzgerald’s own former accompanist and musical director. Two tracks feature vocals by Carter’s fellow Detroiters, actress and singer Miche Braden; and longtime friend and vocalist extraordinaire Carla Cook, who first introduced Carter to jazz violin while the two were classmates at Cass Technical School.
“When people arrange tunes, their voices become part of the recording as well,” Carter says. “I wanted to have many voices and many stylistic approaches on this record.”
Adoration of Ella Fitzgerald is a theme that is woven throughout the violinist’s career. Many songs previously have found their way onto Carter’s recordings. For instance, “Oh, Lady Be Good,” shows up on 1999’s Rhythms of the Heart while “A-Tisket, A-Tasket” appears on the 2006 release, I’ll Be Seeing You: A Sentimental Journey, the moving tribute to Carter’s late mother. Central to Carter’s choice of songs for the album was the ability to spark a connection between the audience and the material, similar to the connection she felt upon hearing Ella for the first time. On the heels of Braden’s spirited, gospel-tinged performance on the opening “Ac-cen-tchu-ate the Positive” comes Williams airily funky arrangement of “Crying in the Chapel.” Best known as a hit for ’50s R&B group, The Orioles, and recorded by everyone from Elvis Presley to Bob Marley, the song was the B-side to Ella’s 1953 single “When the Hands of the Clock Pray at Midnight.” Lightcap’s bluesy take on “I’ll Never Be Free” follows, while Davis’ sultry Rhodes sets the tone for the slinky groove of Sewell’s arrangement of “All My Life.”
Wofford’s setting of the standard “Dedicated To You” pares the band down to a violin/piano/bass trio, allowing Carter’s touching lyricism to shine. Angry gives “Reach for Tomorrow” a shimmering ballad treatment, while Wade’s gutsy R&B take on “Undecided” shines the spotlight on Cook’s powerhouse, no-nonsense vocal. Carter pairs off with Sewell for an intimate duo rendition of “Judy,” the song that jump-started Fitzgerald’s career on the stage of the Apollo Theater. Finally, Sewell’s gutbucket slide guitar fuels the rootsy version of “I’ll Chase the Blues Away” to bring the album to a close.
A student of the violin from age four, Detroit native Carter first focused on listening to classical music. But a vast wealth of influences crept into her ears via her music-loving family. Her older brothers brought home Motown and other soul records, an influence certainly felt on Accentuate the Positive. From her parents’ record collection she would pull titles at random — one day jazz albums, the next, movie soundtracks. It was through that treasure trove that she first heard Ella and instantly was hooked.
“Something about her voice made me feel like I had a personal connection,” Carter recalls. “When she sang, I felt really warm and safe, almost a maternal connection. It just felt like love.” For Carter, the enchantment continued into adulthood. She grew to realize how much technique and virtuosity were involved in producing a sound so remarkably warm and inviting. “As an adult, I realized what an instrument she (Ella) had,” Carter continues. “She had an incredible voice and I gained a lot of respect for her along with the love I had always felt. For years, I would get up and put on an Ella track first thing in the morning. That was the way I needed to start off my day.”
Accentuate the Positive is the end result of Carter’s daily communion with and lifelong devotion to the music of Ella Fitzgerald. In her heartfelt and deeply personal interpretations of these songs we can hear the same degree of warmth, feeling and elegance that imbued the legendary singer’s work as filtered through Carter’s singular voice. And that’s nothing but positive. 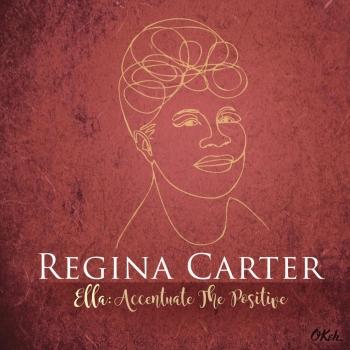 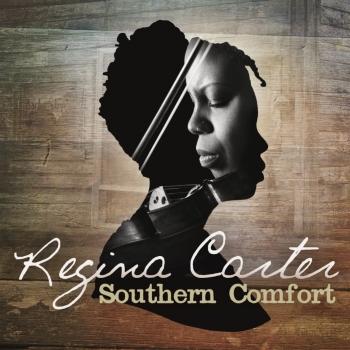 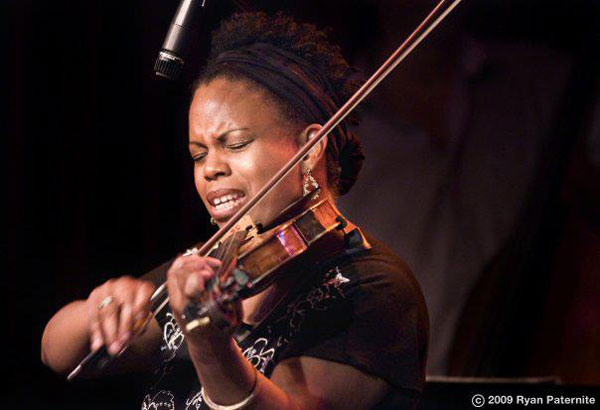 Regina Carter
is considered the foremost jazz violinist of her generation; she is also a MacArthur Fellow (and a recipient of the famed “genius grant”). Drawing from a diverse well of influences which include classical, jazz, Motown, swing, funk, and world music among others, Carter was born in Detroit and began studying piano at age two before taking up the violin. Her earliest training was in classical music, but an interest in jazz eventually took over.
In 1987, she joined the all-female pop-jazz quintet Straight Ahead and appeared on their first three albums before leaving the band in 1991 and moving to New York, where she picked up session work with artists including Aretha Franklin, Lauryn Hill, Mary J. Blige, Billy Joel, Dolly Parton, Max Roach and Oliver Lake. She released her self-titled solo album on Atlantic in 1995, followed by Something for Grace, an album dedicated to her mother and released in 1997. Carter also toured with Wynton Marsalis that same year, then switched to the Verve label where she released Rhythms of the Heart in 1999. Motor City Moments, a tribute to her hometown, followed in 2000.
In December 2001, she traveled to Genoa, Italy, and made musical history by being the first jazz musician and the first African American to play the legendary Guarneri Del Gesu violin, made in 1743 and owned by classical music virtuoso and composer Niccolo Paganini. This encounter inspired her 2003 album, Paganini: After a Dream, which featured works by Maurice Ravel, Claude Debussy and Italian film composer Ennio Morricone. She recorded I’ll Be Seeing You: A Sentimental Journey in 2006 as a tribute to her late mother. That same year Carter was awarded the MacArthur Fellowship, given to a highly select group who “show exceptional merit and promise for continued and enhanced creative work.”
Reverse Thread, released in May 2010, was a celebration of traditional African music via a contemporary perspective. Carter also took her pioneering spirit on the road in the late summer and fall of 2012 for a two-month world tour with rock icon Joe Jackson’s stellar ensemble in support of his release The Duke, a collection of interpretations of Duke Ellington’s work.
Carter continues her musical quest for beauty and history with her SONY Music Masterworks debut Southern Comfort, in which she investigates her family history and explores the folk tunes her paternal grandfather, a coalminer, would have heard as he toiled in Alabama. The expanded project includes a blend of folk songs and spirituals, serving as Carter’s interpretation of her roots through a modern lens.
Said Chuck Mitchell, Senior Vice President of SONY Masterworks, "We're tremendously pleased to have the incomparable Regina Carter with us at Masterworks. Her musical odyssey has been charted through a series of unforgettable recordings over the years and Southern Comfort is the latest and perhaps the most eloquent expression of her deep and profoundly enlightening musical humanity.”
Southern Comfort was released on March 4, 2014 and is currently touring in support of the release.

Booklet for Ella: Accentuate the Positive