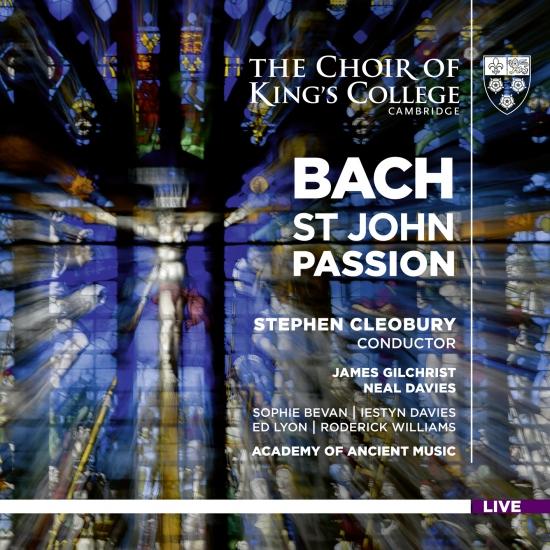 Stephen Cleobury and the Choir of King’s College, Cambridge are joined by the Academy of Ancient Music in Bach’s much-loved St John Passion. Captured live in 2016 during Easter celebrations at the College, it features an all-star line-up of soloists who are renowned for their handling of the repertoire, including King’s alumnus James Gilchrist as The Evangelist and Neal Davies, Cardiff Singer of the World prize-winner, as Jesus.
The St John Passion presents the dramatic narrative with a concentrated sense of urgency, in contrast to the vast proportions of the St Matthew Passion. Many of the arias are deeply reflective and expressive, none more so than ‘Es ist vollbracht!’, in which the countertenor and the viola da gamba weave their melodies in a most beguiling way. The Choir’s recent release of the Duruflé Requiem was nominated for the 2017 International Classical Music awards, while 'Hymns from King’s', a collection of popular hymns arranged by Stephen Cleobury, was chosen by John Suchet as a Classic FM ‘Album of the Week’.
"Cleobury has assembled an unassailable team of soloists, whose powerful insights gild Neal Davies’s Jesus, a characterisation of immense presence and authority." (BBC Music Magazine)
"Herr und Herrscher' is delineated impeccably, with the AAM's graceful strings and perfectly balanced oboes giving nuanced support to the choir. James Gilchrist's compassionate Evangelist, Roderick Williams's animated 'Eilt, ihr angefochtnen Seelen', Iestyn Davies's sublime 'Es ist vollbracht! and Sophie Bevan's lithesome 'Zerfliesse, mein Herze' will be sufficient reasons alone to persuade many of us to pick up a copy." (Gramophone Magazine)
"Stephen Cleobury has been conducting this work for decades, and knows what he is doing when it comes to shaping Bach’s great phrases. The orchestra respond to him very well…and make a beautiful sound…the soloists are excellent" (MusicWeb International)
"Gilchrist’s Evangelist is poised and clear, Davies’ Christ often unbearably moving. Of the other voices, Sophie Bevan and Roderick Williams stand out, which choral and orchestral contributions are apt and beautifully executed; Cleobury’s direction and dramatic timing are exemplary" (Classical Music)
James Gilchrist (Evangelist)
Neal Davies (Christus)
Sophie Bevan, soprano (Ancilla)
Iestyn Davies, alto
Ed Lyon, tenor arias
Toby Ward (Servus)
Benedict Kearns (Petrus)
Roderick Williams, bass arias (Pilatus)
Academy of Ancient Music & King's College Choir Cambridge
Stephen Cleobury, conductor 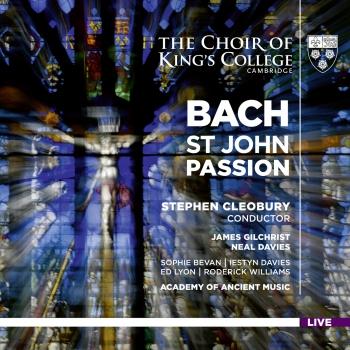