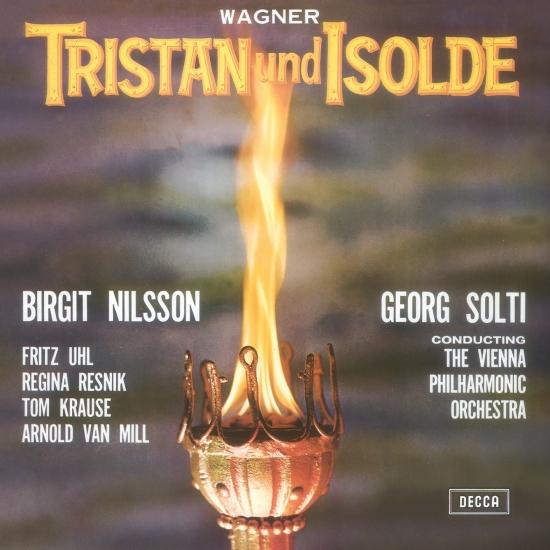 An exciting achievement: Solti has the frantic energy but also the sense of fathomless agony in the great love duet, and he draws wonderful playing from the Vienna Philharmonic.
"This now classic set is perhaps the most complete of those available, for those who value the stereo production as an essential part of their experience of the opera in the home." (Gramophone)
"Nilsson's gleaming voice was in its prime in 1960 and she sings Isolde with tireless concentration and an appreciable feeling for the various aspects of the part-frustration and revenge in Act 1, love's delirium in Act 2 and the elevation of the Liebestod.” (Gramophone Magazine)
“Knife-edged dramatic tension … Birgit Nilsson responds superbly to Solti’s direction … Fritz Uhl is a really musical Heldentenor… the Kurwenal of Tom Krause and the King Marke of Arnold van Mill are both excellent … The production has the usual Decca/Culshaw imaginative touch, and the recording matches brilliance and clarity with satisfying coordination and richness.” (Pinguin Guide)
Birgit Nilsson, soprano
Fritz Uhl, tenor
Arnold van Mill, bass
Tom Krause, baritone
Regina Resnik, mezzo-soprano
Singverein Der Gesellschaft Der Musikfreunde
Wiener Philharmoniker
Sir Georg Solti, conductor
Digitally remastered 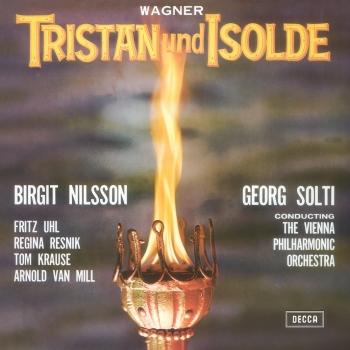 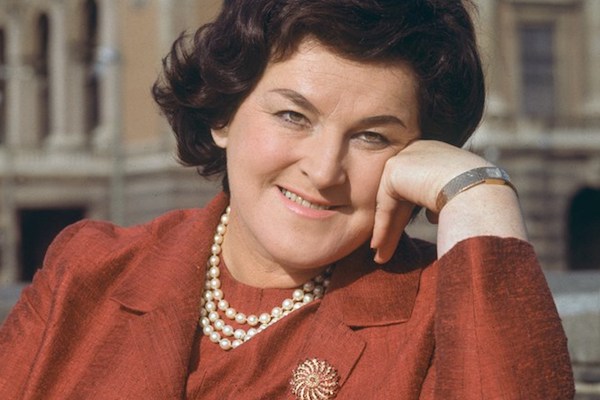 Birgit Nilsson
was born into a farming family. She recalled that she could sing before she could walk, adding ‘I even sang in my dreams.’ When she was five she sang at a school Christmas concert, accompanying herself on the organ, while her mother lay on the floor to work the pedals that her daughter could not reach. Her father however wanted Nilsson to take over the family farm, and so did not support her in pursuing a singing career. Nonetheless, with her mother’s encouragement, she first studied with Ragnar Blennow in Båstad.
Eventually her father relented and when Nilsson was nineteen she entered Stockholm’s Royal Academy of Music, where she was a pupil of Joseph Hislop and Arne Sunnegårdh. During her first year she survived on a small legacy her mother had inherited, but from then on was forced to support her studies by singing at weddings and funerals and taking small roles in films. She attributed her success to native talent rather than to formal instruction: ‘My first voice teacher almost killed me… The second was almost as bad,’ she later commented.
In 1946 Nilsson made her operatic stage debut at the Royal Opera in Stcokholm, substituting for a sick colleague as Agathe / Der Freischütz; and the following year she attracted national attention as Lady Macbeth / Macbeth with Fritz Busch conducting. At the Stockholm Royal Opera she built up a solid repertoire, sung in Swedish, that included the title roles in Aida and Tosca, Donna Anna / Don Giovanni, Lisa / The Queen of Spades, Venus / Tannhäuser, Sieglinde / Die Walküre, Senta / Der fliegende Holländer and the Marschallin / Der Rosenkavalier. This last was one of Nilsson’s favourite roles, one which, as she later lamented, nobody ever asked her to sing. Busch strongly supported her: he cast her as Electra / Idomeneo at the Glyndebourne Festival in 1951, the same year in which she sang Donna Anna at the Maggio Musicale, Florence.
Nilsson’s course was now set as she developed rapidly into one of the most outstanding dramatic sopranos of the century. In 1953 she sang both Isolde / Tristan und Isolde and Elisabeth / Tannhäuser in Stockholm and the following year made her debut at the Vienna State Opera. Here she sang frequently over the next twenty-five years, her roles including Elsa, Sieglinde, Elisabeth, Aida, Senta, Amelia / Un ballo in maschera, and, from 1975, the Dyer’s Wife / Die Frau ohne Schatten. Also in 1954 she appeared for the first time at the Bayreuth Festival as Elsa / Lohengrin and Ortlinde / Die Walküre; she returned frequently, singing principally Isolde and Brünnhilde / Der Ring des Nibelungen (1954, 1957–1958, 1962–1964, 1966, 1968–1970) and (1960–1962, 1965–1967) respectively. During the 1954–1955 season she also sang Brünnhilde in her first complete Ring cycle at Munich, where she also enjoyed great success as Richard Strauss’s Salome.
It was as Brünnhilde, in a Ring cycle conducted by Rudolf Kempe, that Nilsson made her debut at the Royal Opera House, London, 1957. She was to sing there often as a close colleague of Georg Solti, Covent Garden’s Music Director from 1961 to 1971; her roles included Brünnhilde, Isolde, Amelia, Leonore / Fidelio and the title parts in Elektra and Turandot.
During 1957 Nilsson had sung Leonore / Fidelio at Rome; and at the end of 1958 she became one of the few non-Italian singers ever to be invited to open the season at La Scala, Milan, which she did with a historic performance of Turandot, a night she later described as the greatest of her professional career. It was with this role also that she made a notable debut at the Verona Arena in 1969. She made her first North American appearance in 1956, singing at San Francisco (Brünnhilde / Die Walküre), Los Angeles and Chicago.
Nilsson’s Metropolitan Opera debut as Isolde followed in 1959 (the year in which she ceased to be a member of the Royal Stockholm Opera) and won a tumultuous reception. ‘A great star is flashing in the operatic heavens,’ proclaimed the New York Times. She sang at the Met regularly between 1959–1975 and 1979–1982, in over 200 performances of sixteen roles, representing the full span of her repertoire, both German and Italian.
Song recital tours of Australia (1973) and Europe and Asia (1978) preceded Nilsson’s formal retirement from the operatic stage. This occurred in 1982, but she continued to make occasional gala appearances.
She possessed a voice of crystalline clarity, limitless reserves and (when required) great amplitude, which never lost its unique features during her career. At the same time she was a highly convincing actress who, having worked closely with Wieland Wagner, was well aware of the power of stillness. Recognised globally as a singer of rare gifts, Nilsson nonetheless maintained her natural, humorous character throughout her life (on one occasion, when asked to name her favourite role, she answered: ‘Isolde made me famous. Turandot made me rich.’). At the end of her career she reflected: ‘I’ve always tried to remember what my mother used to tell me: stay close to the earth. Then when you fall down, it won’t hurt so much.’