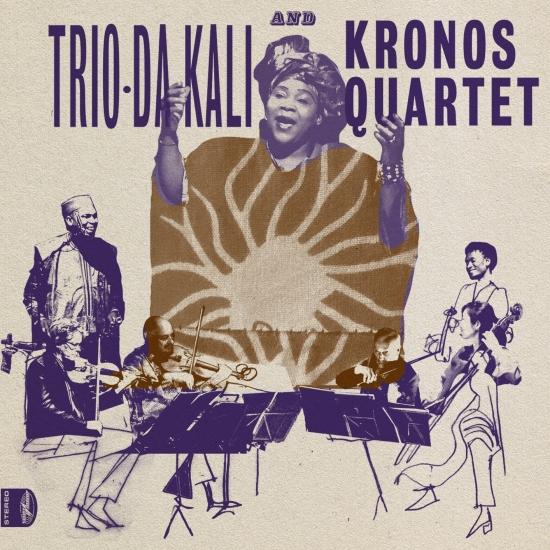 Ladilikan, the new album by Trio Da Kali and Kronos Quartet, represents a landmark in cultural cross-fertilisation that both parties rank among the most satisfying musical experiences of their careers. David Harrington, Kronos’ artistic director and founder, enthuses that the album is “one of the most beautiful Kronos has ever done.” On first hearing their griot grooves being played by violins, viola and cello, Trio da Kali’s musical director Fodé Lassana Diabaté said, “This is going to be the best collaboration of my life.”
Da Kali means ‘to give a pledge’ – in this case to a musical heritage that dates back to the time of Sunjata Keita, founder of the great Mali empire in the early 13th century. The line-up of balafon (xylophone) bass ngoni (lute) and female singer is also based on ancient tradition, although the trio format and its repertoire is now an endangered species in contemporary Malian music.
All three Da Kali members come from celebrated hereditary musical families, and were brought together as a griot ‘super-group’ by Dr Lucy Duran on behalf of the Aga Khan Music Initiative (AKMI), which has an admirable track-record of commissioning and producing a variety of projects involving traditional musicians. Balafon player Diabaté was a long-time member of Toumani Diabate’s Symmetric Orchestra and has recorded with Salif Keita, Taj Mahal and many others. A musician of great subtlety and invention he has honed a virtuosic two-balafon technique to perfection. Bass ngoni player Mamadou Kouyaté is the eldest son of the instrument’s greatest exponent Bassekou Kouyaté, and he holds down the groove in his father’s band Ngoni ba. He is also involved in the thriving Bamako hip-hop scene. Singer Hawa ‘Kassé Mady’ Diabate is the daughter of Mali’s greatest traditional singer, Kassé Mady Diabate, and the power, range and phrasing of her voice led Harrington to compare her to the late queen of American gospel Mahalia Jackson.
The Kronos Quartet – violinists Harrington and John Sherba, violist Hank Dutt and cellist Sunny Yang - have built an enviable reputation as the world’s most adventurous string quartet. Known for their commitment to continually re-imagining the string quartet experience Kronos has released over 60 albums of extraordinary breadth and creativity, and they are no strangers to collaborations with some of the world’s foremost composers and artists. For this project, Kronos turned to the American composer and their frequent collaborator Jacob Garchik to arrange Trio da Kali’s repertoire. Combining the spirit of fearless exploration with expert craftsmanship and skill, Trio Da Kali’s original repertoire has been taken on a fascinating journey, giving a new voice to timeless sounds.
AKMI commissioned the project as part of a long-term collaboration with Kronos that brings them together with leading artists from AKMI’s roster to compose, arrange and perform new music rooted in but not constrained by tradition.
Trio Da Kali
Kronos Quartet 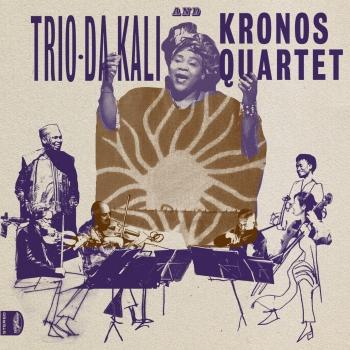 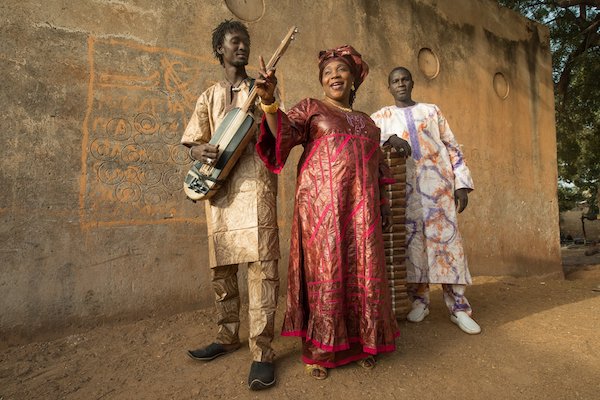 Trio Da Kali
unites three outstanding musicians from the Mande culture of southern Mali who come from a long line of distinguished griots (hereditary musicians). Formed of voice, balafon and bass ngoni, the Trio aim to bring a contemporary twist to ancient and neglected repertoires.
Hawa Kassé Mady Diabaté, daughter of the legendary griot singer Kassé Mady Diabaté, is the Trio’s vocalist. Her rich, expressive voice and her natural vibrato have brought comparisons with Mahalia Jackson, America's great gospel singer. The Trio’s musical director is master balafonist Lassana Diabaté. One of Mali’s most astonishing musicians, Lassana has recorded and toured with many of West Africa’s foremost artists including Toumani Diabate’s Grammy-Award nominated Afrocubism album and Symmetric Orchestra project. The youngest member of the Trio is bass ngoni player Mamadou Kouyaté. Still in his mid-twenties, the eldest son of world-renowned Grammy nominated ngoni player Bassekou Kouyaté brings a contemporary feel to the traditions he has learnt from his father.
Trio Da Kali was originally formed to develop a collaborative project with The Kronos Quartet, produced by the Aga Khan Music Initiative; David Harrington (of Kronos) described it as 'one of the most beautiful collaborations Kronos has had in our first 40 years'. Following the debut live performance of the collaboration at the Clarice Smith Center for Performing Arts in Maryland, USA in 2014, the two groups came together to perform again at Montreux Jazz Festival 2015. A studio recording of the collaboration is under development.
Since their formation Trio Da Kali have performed at some of the world’s most prestigious venues. They made their debut in 2012 at The Royal Albert Hall in London for a BBC Prom, followed by performances later that year with Toumani Diabate at the Theatre de la Ville in Paris and the Royal Festival Hall as part of the London Jazz Festival. Following a Making Tracks tour of the UK in 2015, other prestigious festival appearances followed, including Celtic Connections in Glasgow and sold out performances at the British Library’s West Africa: Word, Symbol Song festival, both in January 2016, and two sold out shows at the Festival of the Centro Historico in Mexico City, featuring Ballake Sissoko and Kassé Mady Diabaté and a performance at Cully Jazz in Switzerland during Spring 2016.
Trio Da Kali’s recorded material to date consists of a ep released in 2015 to coincide with their Making Tracks tour of the UK. Recorded in Bamako, produced by Lucy Durán ('Toumani & Sidiki', 'New Ancient Strings', 'Segu blue') for World Circuit, the 5-track EP brings this recorded repertoire to an international market for the first time.
While the trio has developed, so as individuals they have each continued to break new ground: in 2015 Lassana and Hawa were among musicians selected for their capacity to play 18th Century Mande music for the TV film series ROOTS, readapted from the hit series in the 1980s and broadcast earlier this year in the US on The History Channel. Hawa was invited to the India-Africa Summit in New Delhi in 2015 where she opened the celebratory concert at the President’s palace with Indian Sufi Gospel creator, Sonam Kalra. And in June 2016 she performed spellbinding solo vocals for Terry Riley’s innovative Mali in C presented by Damon Albarn’s Africa Express project at prestigious European festivals – Les Nuits de Fauvière in Lyon and Holland Festival.
Meanwhile, and following on from the successful collaboration with the Kronos Quartet, Lassana was invited to compose a contribution inspired by the Sundjata epic to the Kronos collection of distinguished examples of contemporary music entitled “Forty For the Future”. He continues to contribute to Kronos Quartet concerts around the world. Mamadou Kouyate continues to tour and record with his father, as well as running his own studio in Bamako.