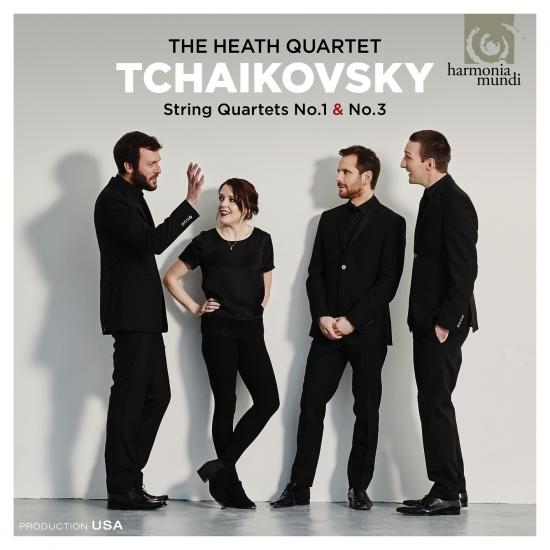 The Heath Quartet makes its harmonia mundi début with this contrasting programme of Tchaikovsky’s String Quartets: his Quartet No. 1 (famed for its plaintive “Andante cantabile”) and the tempestuous No. 3 (dedicated to the memory of Ferdinand Laub).
Since being selected by YCAT and winning 1st Prize at the Tromp Competition in 2008 the Heath Quartet has forged a strong international presence. In 2011 they were awarded a prestigious Borletti-Buitoni Special Ensemble Scholarship and undertook complete Beethoven cycles at the Facyl Festival in Salamanca and in Edinburgh. Highlights over the last year have included recitals at Wigmore Hall as part of the Emerging Talent scheme, including the premiere of a new work by Luke Bedford and collaborations with Stephen Hough and Ian Bostridge. Future engagements include complete Tippett and Bartók cycles, and a recital with the soprano Anna Caterina Antonacci at Wigmore Hall, debut recitals at the Louvre and Musée d’Orsay in Paris, return visits to the Concertgebouw and their USA debut.
"The Heath Quartet’s account is rather dry-eyed, stressing the lyrical over the melancholy compared with the Borodin Quartet’s more sentimental reading for Teldec. The Heath’s sound is bright and without undue vibrato, which gives their playing a slightly cool edge for this repertoire" (Gramophone Magazine)"
The lovely sense of blend in the opening of the first quartet reflects their experience in Beethoven: there is a beautiful, Germanic warmth to the sound that actually sounds rather un-Russian." (MusicWeb International)
"These are acutely observed, restrained performances that seem immediately to take the listener to the heart of the music. Without sacrificing the overall architecture and musical argument, details emerge naturally with freshness and vitality: whilst it is difficult to single out any particular highlight, the grave slow movement of the third quartet is remarkable for its depth and concentration." (Classical Music)
"one of the things I was very impressed by in this performance is that they make this Tchaikovsky sound almost closer to Brahms in some ways…Tchaikovsky’s thought processes are so often undervalued, we get so swept away by the emotion that we don’t realise he was also a very fine musical thinker too…they [the Heath Quartet] show that you don’t have to go overboard to capture that sense of loss of grief" (Record Review)
Heath Quartet 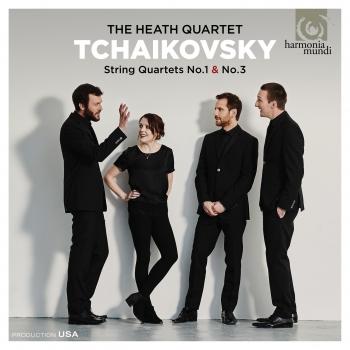 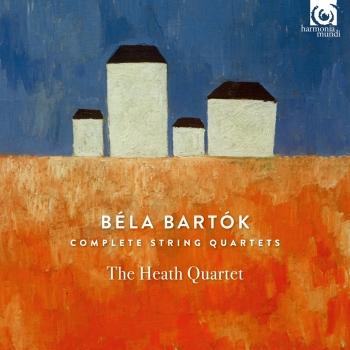 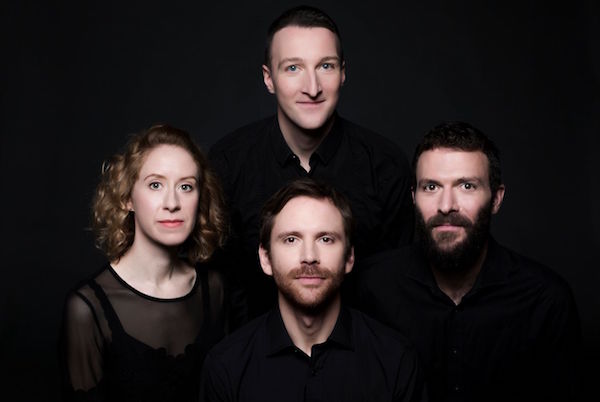 Heath Quartet
The dynamic and charismatic Heath Quartet are fast earning a reputation as one of the most exciting British chamber ensembles of the moment. In May 2013 they became the first ensemble in 15 years to win the prestigious Royal Philharmonic Society’s Young Artists Award. Formed in 2002 at the Royal Northern College of Music they were selected for representation by YCAT, were awarded a Borletti-Buitoni Special Ensemble Scholarship and in 2012 won Ensemble Prize at the Festspiele Mecklenburg-Vorpommern.
Their recording of Tippett’s string quartets (Wigmore Live) received widespread acclaim and won the 2016 GRAMOPHONE Chamber Disk of the Year. A subsequent release on Harmonia Mundi of Tchaikovsky: Quartets 1 &3 was selected as Disk of the Week by both The Sunday Times and BBC Radio 3. The Quartet’s complete Bartók cycle (recorded live at the Wigmore Hall) is due for release in May 2017. Future highlights also include a return to the Berlin Konzerthaus, performances in Austria with Michael Collins, complete cycles of Jörg Widmann’s string quartets at Kilkenny Festival, Berlin’s Boulez Saal and Wigmore Hall, as well as numerous appearances at summer festivals in the United Kingdom and beyond.
Notable performances of the previous seasons have included a complete Beethoven Cycle at Kilkenny Festival, a John Tavener premiere at the BBC Proms, concerts at the Beethovenfest Bonn, Mecklenburgh-Vorpommern Festival, the Concertgebouw Amsterdam and their debuts at the Musée d’Orsay and Louvre Auditorium in Paris. Regular visitors to the United States the quartet also recently made their debut in New York at both Carnegie Hall and the Lincoln Centre, and continue their residence at Middlebury College, Vermont. In the UK they have also performed at the Barbican, Bridgewater Hall, Sage Gateshead, Perth Concert Hall and Queen’s Hall Edinburgh. And in Europe they have appeared at the Kissingen Winterzauber and Schwetzinger Festivals as well as deSingel Arts Centre in Antwerp, Vara Konserthus in Sweden, Berlin Konzerthaus, Esterházy Palace, and the Musikverein and Konzerthaus in Vienna.
The Heath Quartet regularly enjoy working with a host of talented collaborators including Anna Caterina Antonacci, James Baillieu, Ian Bostridge, Adrian Brendel, Michael Collins, Colin Currie, Stephen Hough, Richard Lester, Aleksandar Madzar, Anthony Marwood, Hannes Minnaar, Mark Padmore, Lawrence Power, Carolyn Sampson, plus even venturing into the world of jazz with a ‘Wigmore Late’ concert together with saxophonist Trish Clowes and pianist Gwilym Simcock.
Strong exponents of contemporary music, the Quartet have also worked with several leading composers including Hans Abrahamsen, Louis Andriessen, Brett Dean, Anthony Gilbert, Sofia Gubaidulina, Steve Mackey. They took part in the European première of Steve Mackey’s ‘Gaggle and Flock’ for string octet, the world première of John Musto’s ‘Another Place’ with Carolyn Sampson at the Wigmore Hall
The Heath Quartet members are teaching staff at the Guildhall School of Music and Drama.