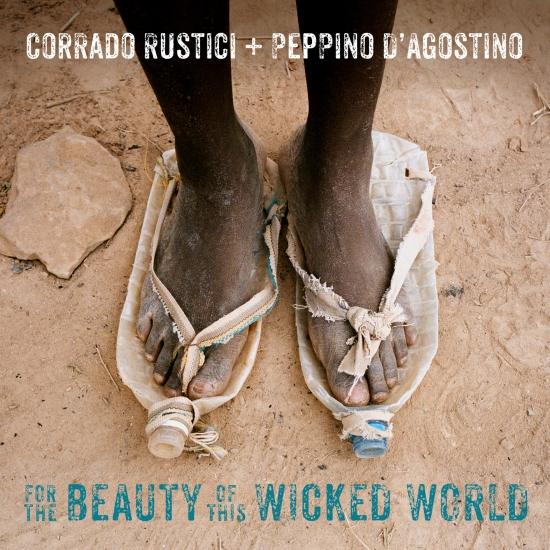 Info for For the Beauty of this Wicked World

For the beauty of this wicked world is a musical meeting place between Peppino D Agostino and Corrado Rustici; two guitarists/composers who share common cultural and musical roots. Corrado Rustici's remarkable career has included playing with some of the greatest and most popular artists of the 20th century, from Whitney Houston, Luciano Pavarotti, and Herbie Hancock, to Miles Davis, Elton John and Aretha Franklin, while also producing some of the most influential artists in Italian history (Zucchero, Elisa, Francesco De Gregori, Claudio Baglioni, Andrea Bocelli, Negramaro and Luciano Ligabue). Peppino D Agostino has been listed in 2017 by Guitar Player as one of the 50 transcendent superheroes of the acoustic guitar. The CD Every Step of The Way was awarded by Acoustic Guitar s People s Choice Awards with a Bronze medal for Best Acoustic Album of All Time.
For the beauty of this wicked world was born out of the desire to create musical landscapes which were not necessarily guitar-centric. The mainly instrumental album features seven songs, two of which - The knife of love and the title track For the beauty of this wicked world also feature Corrado on vocals. They range from progressive rock, to ambient, to ballads and jazz and electronica. The songs Oumuamua and XXVI-118/120 are enriched by the musical contribution of guest musicians George Brooks on sax (Terry Riley, Zakir Hussein) and Jeff Campitelli on drums (Joe Satriani).
Two men from opposite ends of the music spectrum brought together by their passion for music. Two real masters of their instruments creating a transmodern musical experience that goes beyond any musical genre. Take a journey with these two leading musicians and composers and enjoy a musical experience that is truly unforgettable!
"Peppino writes wonderful guitar pieces. He is one of my favorite composers for this cranky instrument. Plus, he's a tone player. I love his sound...he gets the resin and the wood." - Leo Kottke
"... we find some touching solos by Rustici that wisely mixes melodic melody and transcendental virtuosity imbued with outside notes that strike for balance in the drafting and beauty of exposure." -Fillipo Bertipaglia, Accordo
"For the Beauty of This Wicked World" is a precious record that nourishes those who are thirsty for novelty. It should not be missing in the discography of all lovers of good, in this case excellent, Music." - Fillipo Bertipaglia, Accordo
Corrado Rustici, electric guitar, keyboards, vocals, programming
Peppino D’Agostino, acoustic, nylon, 12 strings guitars, midi guitar
George Brooks, saxophone
Jeff Campitelli, drums, percussions
Engineered by Corrado Rustici
Mixed and Mastered by Sabino Cannone at MoreVox Studio, Milano, Italy
Produced by Corrado Rustici 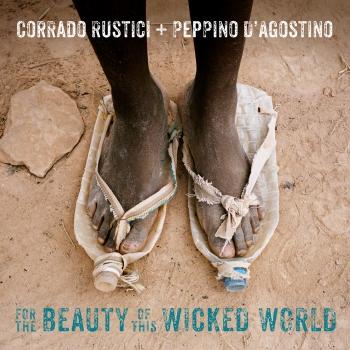 For the Beauty of this Wicked World 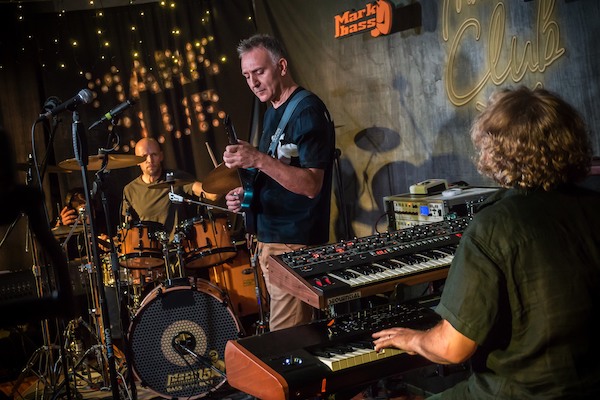 Corrado Rustici
"No matter which musical context defines your artistic truth. "The Multiamp will give meaning and clarity to the notes that flow from your heart to your fingers."
Corrado Rustici has been involved with some of the most successful albums made over the past twenty-five years. A body of work that has surpassed 40 million in unit sales.
As a producer he has worked with such talents as Andrea Bocelli, Clarence Clemmons, Claudio Baglioni, Elisa, Eric Clapton, Francesco De Gregori, Francesco Renga, Jeff Beck, Jimmy Smith, Johnny Lee Hooker, Luciano Pavarotti, Luciano Ligabue, Negramaro, Paul Young, PFM, Rita, Sheila E, Sinead O'Connor, Stevie Ray Vaughn, Stewart Copeland, Zucchero Fornaciari.
As a musician he has also worked with Allan Holdsworth, Aretha Franklin, Elton John, George Benson, George Michael, Herbie Hancock, Michael Manring, Miles Davis, Narada Michael Walden, Paul Mc Candless, Phil Collins, Steve Smith, Whitney Houston, Zakir Hussein.
Yet, while his own name is a household word in Europe and he is listed in The Black Book, (Solid State Logic's tribute to legendary producers) in America, he continues to work in relative anonymity.
"No matter which musical context defines your artistic truth.", says Corrado, "The Multiamp will give meaning and clarity to the notes that flow from your heart to your fingers."
Peppino D’Agostino
A young Sicilian artist left Italy over 30 years ago, with the dream of “playing with the greatest guitarists”. Peppino has achieved his dream and he’s now firmly planted in the “who’s who” of the guitar world.
Peppino D’Agostino emerged on the acoustic guitar scene in the early 80’s as a leading member of the second wave of the great fingerstylists that helped redefine the instrument in the ’90s. His remarkable technique, penchant for open tunings, and percussive effects are the basis of his unique compositional style which has been inspiring musicians and audiences alike for decades. Add to that his natural warmth, playfulness, and broad musical tastes and you have the recipe for what he calls “minestrone music”. His virtuosity and his emotional charge have also had a significant influence on the younger generation of fingerstyle guitarists. D’Agostino continues to evolve and grow in ways that would have been hard to predict when he first showcased his melodic yet emotionally intense style on the recordings Acoustic Spirit, Close to the Heart, and Every Step of the Way which was named one of the top three acoustic guitar albums of all time by Acoustic Guitar magazine readers.
D’Agostino has performed in more than 30 countries, at prestigious international festivals and has played in some of the world’s most important theaters. He has shared the stage with Tommy Emmanuel, Leo Kottke, Laurindo Almeida, Sergio Assad, Larry Carlton, and Eric Johnson, to name a few. His solo recordings include high quality labels such as Favored Nations, Mesa / Bluemoon, and Acoustic Music Records. Recognized as “the guitarist’s guitarist” by Acoustic Guitar magazine and described as “a giant of the acoustic guitar” by the San Diego Reader, D’Agostino was voted Best Acoustic Guitarist by readers of Guitar Player magazine. An active member of the Pacific Guitar Ensemble, Peppino has collaborated and recorded with the classical guitarist David Tanenbaum (chair of the classical guitar at the Conservatory of San Francisco), Jeff Campitelli (considered one of the 100 greatest drummers of all time by Rolling Stone magazine) and the legendary Paraguayan harpist and violinist Carlos Reyes, among many others. D’Agostino’s composition “Stammi Vicino,” written with electric guitarist Stef Burns and Italian rock star Vasco Rossi, reached number one in the iTunes rock charts in Italy.
D’Agostino’s simultaneous immersion in the classical guitar and rock worlds, has culminated in his most recent solo recording, Penumbra, a mix of sophisticated yet melodic compositions that are technically complex. Released by Mesa/Bluemoon, Penumbra includes two compositions written for D’Agostino by Latin Grammy Award winner and classical guitar legend Sergio Assad as well as original compositions by three great contemporary classical guitarists: Roland Dyens, Maurizio Colonna and Gyan Riley. You could arguably say that D’Agostino is the missing link between the Classical and the Acoustic guitar.
Recently Peppino had his very first sold out tour in China and a soundtrack composed for the world renowned Monterey Bay Aquarium in California.
In addition to performing, D’Agostino also makes time to teach. He enjoys meeting with individual students as well as providing group instruction and vacation learning packages like the Acoustic Guitar Cruises, Creative Vacances in La Moreau, France, or teaching with legendary guitarist Martin Taylor. The leading online instruction company Truefire has released a series of videos in which D’Agostino explains his influential guitar techniques and approach to composition. Peppino, when not performing or teaching, also has fun writing musical licks for new versions of games such as Sims – a product of Electronic Arts, or Dragons of Atlantis for Kabam.
Peppino likes to compare his musical approach to the culinary art of his native Italy: “If you want to prepare a good, succulent dish you have to know how to mix the various ingredients and, most important, have knowledge of the right amounts. Similarly, in musical composition you must be able to properly combine melody, harmony, rhythm and percussive effects with discretion and elegance.”
People never know what to expect at his concerts. Peppino’s repertoire is always changing, adapting to the rapport he establishes with his audience. His live performances, a combination of beautiful, complex, up tempo original instrumentals, memorable arrangements and engaging songs are beautifully addictive.
Peppino never disappoints, opening new musical doors with his loved and award winning Seagull signature model guitar. His hands constantly searching, experimenting, and his original music and songs taking his audiences to ever-expanding heights.