Morricone: Once Upon a Time, Arrangements for Guitar Enea Leone

Info for Morricone: Once Upon a Time, Arrangements for Guitar

The maestro of Spaghetti Western music in unfamiliar guise: new arrangements of hit themes from Morricone’s greatest film-scores.
Born in 1928, Morricone trained at the Santa Cecilia conservatoire in Rome, and soon began to make a name for himself in Italy as both a trumpeter in light-music orchestras and as a composer and arranger. But it was with the soundtrack to A Fistful of Dollars in 1964 that he gained international attention, and thereafter established his reputation with a hatful of contributions to movies which at the same time made the name of Clint Eastwood as a gum-chewing hardball hero. Morricone’s scores defined the mood of Sergio Leone’s pictures: spare, precise, instantly memorable.
Enea Leone has selected and arranged the themes from the Leone/Eastwood ‘dollar’ trilogy alongside later classics directed by Leone such as Once Upon a Time in the West and Once Upon a Time in America. He has also ventured into the film composer’s later career, with themes from Investigation of a Citizen Above Suspicion, My Name Is Nobody, The Mission, Nuovo Cinema Paradiso, Love Affair and the music he compiled for Tarantino’s 2009 epic Inglourious Basterds.
In 2007, following five nominations, Morricone finally won the Film & TV Music Award for Lifetime Achievement, and in 2016 an Oscar for the best original score for Tarantino’s film The Hateful Eight (2015). If belatedly, the awards recognised Morricone’s mastery at drawing in a viewer to a scene; capturing a character; underscoring dialogue and driving forward the director’s vision of a movie in terms that spoke to millions of people.
While piano versions of Morricone’s scores are widely available, his music fits the guitar admirably, as Enea Leone demonstrates on this new recording. He has enjoyed a 20-year career as a performer and teacher and made several well-received recordings for Brilliant Classics such as the complete studies by Fernando Sor (94791), which attracted a glowing review from Classics Today: ‘These pieces are both technically beneficial and musically rewarding, and Milan-born guitarist Enea Leone’s suave execution, keen ear for tone colour, and steady yet flexible rhythmic sense befit the music.’
Ennio Morricone (b. 1928) is without doubt the most successful, popular and influential composer of film music of the 20th century. He wrote over 400 film scores which received numerous International Awards, including Grammy Awards.
This new recording presents arrangements for guitar of his most iconic melodies from the films Once Upon A Time in The West, A Fistful of Dollars, The Mission, Inglorious Basterds and many more.
Played by Enea Leone, a pupil of the great Alirio Díaz, who already recorded for Brilliant Classics works by Castelnuovo-Tedesco (Appunti), Sor (Complete Studies for Guitar) and Music from Argentina (with bandoneonist Roberto Bongianino).
Enea Leone, guitar

Morricone: Once Upon a Time, Arrangements for Guitar 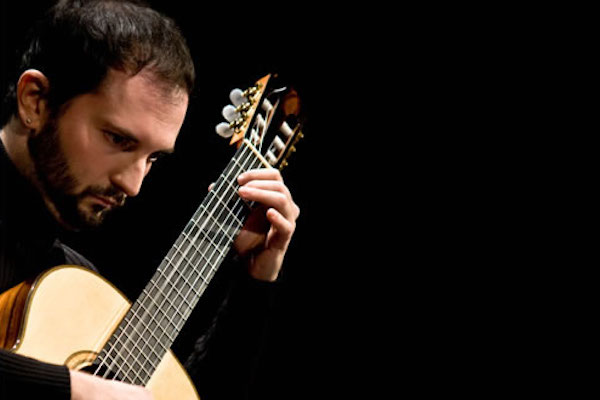 Enea Leone
born in Milan in 1978, approached the guitar at a very young age, under his father's guidance.
He later studied with Lena Kokkaliari until his admission to the Conservatory "G. Verdi" of Milan under the tuition of Ruggero Chiesa and Paolo Chierici, where he graduated with flying colours in 1998. He then attended a post graduation two year course achieving the highest marks, and subsequently improved his training further with Emanuele Segre, Alirio Diaz and Oscar Ghiglia, obtaining a scolarship and certificate at the Accademia Musicale Chigiana of Siena in 2002, 2003 and 2004. In 2005, he gained the "Solistendiplom" at the Musik-Akademie of Basel, again with Oscar Ghiglia.
Since 1990 he has made his name as a soloist in some of the most important national and international competitions, such as Stresa, Franz Schubert, Mondovi, Lodi, Gargnano, Pittalunga, and won the International Tournament of Music (TIM) in 2002. He also performed in many concerts in Italy ("Pomeriggi Musicali", "Associazione Amici del Consevatorio G. Verdi", "Amici del Loggione del Teatro alla Scala") and abroad (Germany, France, Switzerland, Austria, Romania and Greece), both as a soloist and in chamber music ensemble or orchestra ("Aranjuez" Concert with the Cantelli orchestra of Milan).
Since 2000 he has been cooperating with the musical association "Harmonia School of Music" of Gessate (MI) where he is Artistic Director and Professor of the annual Masterclass, and has held numerous Masterclasses of guitar during several musical events: "La magia del borgo, chitarra e altro..." in Brisighella (Imola) since 2006, Mondovi' competition - Roburent (Cuneo) since 2007, "Suoni del Legno" City of Todi since 2008, and "Badesi in Musica" (Sardinia) since 2011 .
At the moment he is Professor of guitar at the Conservatory "Pierluigi da Palestrina" of Cagliari and at the Conservatory "Torrefranca" of Vibo Valentia.
In 2003 he recorded a Cd for M.A.P. entirely dedicated to Astor Piazzolla, alternating solo and chamber music pieces. In 2007 he published "Eleven", a record distributed by Nicolosi Production (a label that numbers Sting, Frank Gambale and Billy Cobham among its artists) containing Maestro Ennio Morricone's music transcribed for solo guitar by C. Marchione. Some pieces from Eleven were then included in a collection dedicated to Maestro Morricone by publiher Carish.
2011 has marked the release of "Souvenir", a Cd completely dedicated to romantic music (Coste-Regondi) containing two world firsts and welcomed with outstanding reviews by the specialist press: "...in "Souvenir" Enea Leone is up there with those artists and works which, from the musical and strictly executional point of view, would make anyone shudder, showing excellent interpretative skills and an impeccable technique... (artistic and technical judgement: 5 stars, "Amadeus" magazine)
"...Enea Leone demonstrates his ability to catch the listener's attention right from the first bars: his ductile, soft and round sound is the perfect exterior manifestation of an absorbed, almost dreamy behaviour... a commendable ability, led by a sensibility that makes him attentive to the musical content of each subject... Leone proves his impeccability from any point of view..." (artistic and technical judgement: 5 stars, "Musica" magazine).
"...his technique enables Leone to achieve speed and exact pronunciation of all the notes... his virtuosity enhances the essential elements for commendable interpretation of the romantic repertory: phrasing, stolen timing, suspended and hold notes, continuity of the melody, clearness of modulation..." ("Il Fronimo" magazine)
"...Enea's interpretations are particularly convincing for their wide timbral palette and the large use of dynamics, thanks to which the music flows maintaining its emotional tension... congratulations to Enea Leone for a work performed with zeal and devotion, a work for which we can olny be thankful..." (voted Cd of the month, 5 stars, "Seicorde" magazine)
"..."Souvenir" contains some well known tunes as Reverie and Introduzione e Capriccio, but seldom executed in such an interesting way... Enea Leone shows excellent skills in the interpretation of romantic repertory and the highest virtuosity..." ("Diverdi" magazine - Spain)
"...the passion of the excellent Enea Leone always makes the execution of Coste and Regondi's works very interesting..." ("Gendai Guitar" magazine - Japan).
According to his old mentor Oscar Ghiglia, Enea Leone is "a very talented guitarist and teacher: gifted with unlimited technical competence and exceptional stage presence, he is able to transmit his passion and knowledge to his students in the most efficient way".

Booklet for Morricone: Once Upon a Time, Arrangements for Guitar