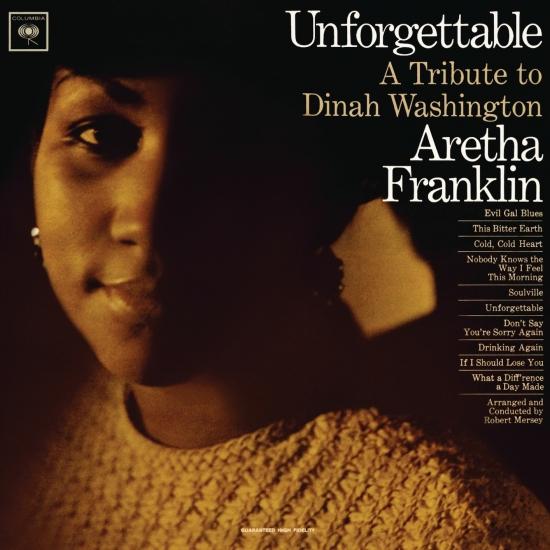 Info for Unforgettable: A Tribute To Dinah Washington

Since her youth Franklin had admired Dinah Washington, and it's a safe bet that the level of emotional commitment Washington brought to her work was a major influence on the blossoming style of Aretha, not to mention Washington's effortless sense of swing. Shortly before she died, Washington took appreciate notice of her acolyte as well. So Aretha's tribute to Washington is as logical as it is satisfying. Recorded when Aretha was just 21, „Unforgettable“ is somewhat of a departure from her more R&B-oriented early work. However, the string arrangements of Johnny Mersey and the jazzy bass work of George Duvivier mesh perfectly with Franklin's high-flying vocal fireworks. From the slow, subtle caress of 'What a Difference a Day Made' to the organ-led blues of 'Nobody Knows the Way I Feel This Morning,' the young Aretha is in total command of the material here, simultaneously paying homage to and progressing from the influence of Washington.
'...a moving, deeply felt tribute to a spiritual elder sister and an early conflagration of the 21-year-old Franklin's own burning brilliance...' (Q Magazine)
Aretha Franklin, vocals, piano
Ernie Hayes, piano, organ
Paul Griffin, organ
Teddy Charles, vibes
George Duvivier, bass
Gary Chester, drums
Ernie Royal, trumpet
Buddy Lucas, tenor saxophone, harmonica Bob Asher, trombone
Robert Mersey, Strings arranged and conducted
Recorded February 7–10, 1964 at Columbia Recording Studios, New York
Produced by Robert Mersey
Digitally remastered