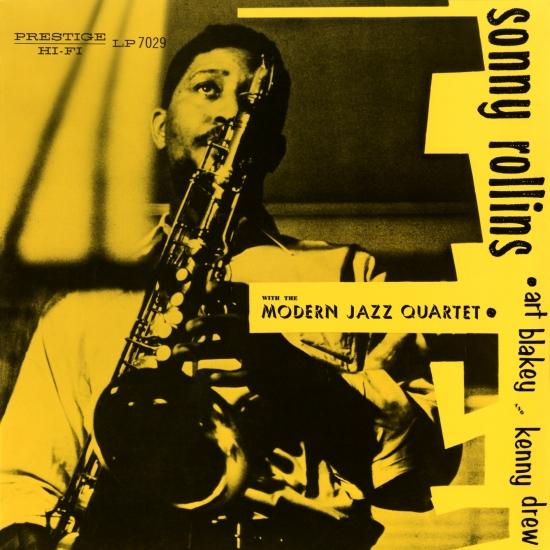 Info for Sonny Rollins With The Modern Jazz Quartet (Remastered)

Always gifted with a big band sound and a pure sense of swing, Sonny Rollins did not emerge full-blown from the foam like Venus. He gained polish and experience with Bud Powell, J.J. Johnson, Miles Davis and Thelonious Monk, before making his Prestige debut as a leader at the tender age of 21. With The Modern Jazz Quartet celebrates the tenor saxophonist's first three 10-inch LPs—Mambo Jazz, Sonny Rollins Quartet, and Sonny Rollins with Milt Jackson--and is culled from sessions in December of 1951 and October of 1953.
There is much joy and rhythmic elation in Rollins' early vamp figures such as "Shadrack" and "Scoops," where he preaches with a stomping fervor that anticipates the hard bop movement. On "Newk's Fadeaway," he hints at the harmonic freedom and plasticity of line that would distinguish his early triumphs, while "Mambo Bounce" (sampled early and often by the acid jazz crowd) is a delightful early mixture of Afro-Cuban and swing textures, prefiguring his later uses of calypso melodies and rhythms.
And while Rollins' ballad playing doesn't approach the harmonic depths he would routinely invoke in later years, his smoky tone and behind-the-beat phrasing suggest an affinity for middle period Lester Young ("This Love Of Mine" and "With A Song In My Heart"), even as his thicker timbre and robust articulation point to Coleman Hawkins and Ben Webster ("With Time On My Hands"). By the time he takes on Ellington's "In A Sentimental Mood" with the Modern Jazz Quartet, his tone has really filled out and he's improvising with a broader range of inflections. "The Stopper" offers a garish chase with cute starts and stops, while "No Moe" is a classic line that inspires vigorous, easy-going blues interplay. And for hard swinging, "It's Almost Like Being In Love" hints at future virtuoso turns on the popular song.
„Included here are some of Sonny Rollins' earliest sessions as a bandleader. These are among the fresh and vibrant baker's dozen of selections on Sonny Rollins With the Modern Jazz Quartet (1953). The title is a bit misleading though, since the MJQ -- with John Lewis (piano), Milt Jackson (vibes), Percy Heath (bass), and Kenny Clarke (drums) -- is only accounted for during the first four sides. There is a playful and energetic tone that ricochets from Jackson's fluid vibes, landing firmly in Rollins' musical court. One prime example of this interaction is heard throughout the solos on the opening track, "Stopper." Similarly, "Almost Like Falling in Love" bops, weaves, and swings throughout, with some expressive contributions via Lewis, effectively linking Rollins' and Jackson's solos. "No Moe," which stands as one of the best originals on the disc, also bears their undeniable connection. Another not-to-be-missed reading is the sultry "In a Sentimental Mood." Here, Rollins spirals mature and ethereal lines against Jackson's resonant intonation and shimmer. If just for these tunes, Sonny Rollins With the Modern Jazz Quartet is a vital component in any jazz enthusiasts' collection. The rest of the disc is performed by Rollins and a quartet that also includes the talents of Kenny Drew (piano), the MJQ's Percy Heath (bass), and the main Jazz Messenger, Art Blakey (drums). On the original tune "Scoops," Blakey's hardball antics provide well-placed sonic interjections, punctuating Rollins' highly infectious melodic sense. While on the subject of catchy tunes, all ears should be directed to the biblically derived title "Shadrack," which had been a signature piece for Louis Armstrong. This early incarnation of the Sonny Rollins Quartet has rarely sounded as cohesive, as they collectively percolate with their definitive execution. Of particular note is the inclusion of Miles Davis' "I Know." This extension of Charlie Parker's "Confirmation" features Davis on piano accompanying Rollins with solid chord progressions, allowing the burgeoning player to lead his first-ever quartet with Heath and Roy Haynes (drums).“ (Lindsay Planer, AMG)
Tracks 1-4: October 7, 1953
Sonny Rollins, tenor saxophone
John Lewis, piano
Milt Jackson, vibes
Percy Heath, bass
Kenny Clarke, drums
Tracks 5-12: December 17, 1951
Sonny Rollins, tenor saxophone
Kenny Drew, piano
Percy Heath, bass
Art Blakey, drums
Track 13: Recorded January 17, 1951
Sonny Rollins, tenor saxophone
Miles Davis, piano
Percy Heath, bass
Roy Haynes, drums
Recorded at Apex Studios, New York City
Produced by Bob Weinstock
Digitally remastered
Please Note: We offer this album in its native sampling rate of 44.1 kHz, 24-bit. The provided 192 kHz version was up-sampled and offers no audible value!

Booklet for Sonny Rollins With The Modern Jazz Quartet (Remastered)