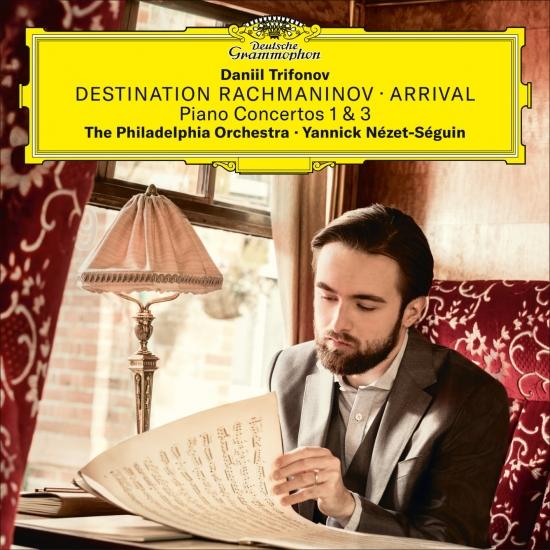 “During the pianist’s solo passages, Nézet-Séguin, the most balletic of conductors, simply stood there, his baton lowered. With a look of awe and wonder on his face, his flicker of a smile seemed to say, ‘Daniil, you are the man!’”
Destination Rachmaninov · Arrival captures a master pianist at work. The album, set for international release in October 2019, unites the acclaimed Russian-born artist’s account of Rachmaninov’s Third Piano Concerto, one of the most difficult and demanding in the repertoire, with his searing interpretation of the composer’s First Piano Concerto. It also includes Trifonov’s solo piano transcription of Rachmaninov’s “The Silver Sleigh Bells” and his arrangement of the evergreen Vocalise. Eighty years ago, Rachmaninov himself created benchmark recordings of these two concertos with the Philadelphia Orchestra. Now both works occupy the heart of Trifonov’s latest Deutsche Grammophon release, the second in his series of the composer’s piano concertos with the Philadelphia Orchestra and its Music Director, Yannick Nézet-Séguin.
Reflections on the musician’s itinerant life and the historic forces that have uprooted countless creative artists run through the Rachmaninov journey undertaken by Daniil Trifonov. His two-disc Destination Rachmaninov project, he explains, bridges the gap in time and space between Rachmaninov’s early years in late Tsarist Russia and his life in exile after the Russian Revolution.
“The Third Piano Concerto is a unique example of one unending melody,” Trifonov observes, “one continuous flow of musical consciousness – a single, rhapsodic journey. Above all, there is nothing banal in the expression. Even in its heights of lyricism or virtuosity, every note is devoted to a higher purpose.” That purpose, Trifonov suggests, involves nothing less than what he calls “a spiritual probing of the mysteries of the soul”.
It takes a performer in total command of the Third Piano Concerto’s mighty technical challenges to penetrate deep beneath its surface. Daniil Trifonov’s interpretation treats virtuosity not as an end in itself but as the means to propel a fearless spiritual adventure. The work, the pianist concludes, “has a unique kind of emotion – a solemn intimacy. It is like a prayer – the composer’s inner conversation with himself, and with God.”
Trifonov draws further comparisons with prayer when he talks of Rachmaninov’s Vocalise. The piece, written in 1912 as a wordless song for high voice and piano, proved so popular that it was soon arranged by the composer for soprano and orchestra. Countless other arrangements have followed since for everything from jazz ensemble to solo theremin. “It’s so pure and sincere, and there’s a simplicity in it that is very touching,” notes Trifonov. “So it feels almost like a prayer, and there is this meditativeness that is perhaps so typical of Rachmaninov’s music.”
Rachmaninov’s First Piano Concerto is an early work completed soon after the composer’s graduation from the Moscow Conservatory in 1891. The score, Trifonov says, is the work of someone who had yet to experience tragedy. Its generous, open-hearted spirit survived the revisions Rachmaninov made in November 1917 during the turbulent early days of the Russian Revolution and served as a reminder of youthful optimism throughout his life. “It connected him with memories of home, his roots – of happier times.”
Yannick Nézet-Séguin and the Philadelphia Orchestra have accompanied Daniil Trifonov throughout his journey with Rachmaninov. “From the first moment we worked together on Rhapsody on a Theme of Paganini,” the pianist recalls, “I realised how much respect these musicians have for Rachmaninov’s music and how much knowledge they have of his idiom. To me, it was a great idea to record all his concerti with the Philadelphia Orchestra and Yannick for Deutsche Grammophon.” Nézet-Séguin underlines the point: “There’s something in the air. It’s difficult to explain, but the Philadelphia players are blessed with a mixture of tradition, pride, understanding and value.”
Destination Rachmaninov · Arrival will be released on 11 October 2019. He will perform Rachmaninov at London’s Royal Festival Hall (22 March 2020), Hamburg’s Elbphilharmonie (25 March), the Berlin Philharmonie (26 March) and the Konzerthaus in Vienna (28 March). The pianist returns to Europe soon after as soloist in Mozart’s Piano Concerto No. 25 in C major K 503 with the New York Philharmonic Orchestra and Jaap van Zweden. Their tour opens at the Barbican Centre in London on 30 April and unfolds over the following two weeks with concerts in Cologne, Luxembourg, Lyon, Stockholm, Berlin and Dresden.
Daniil Trifonov, piano
Philadelphia Orchestra
Yannick Nezet-Seguin, conductor 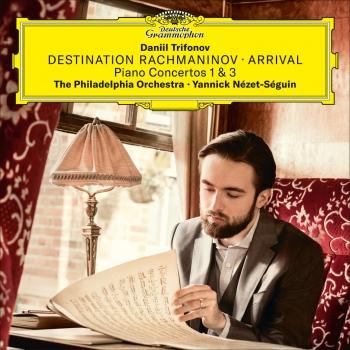 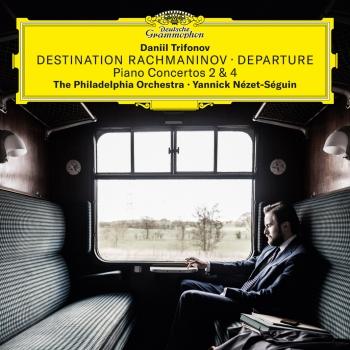