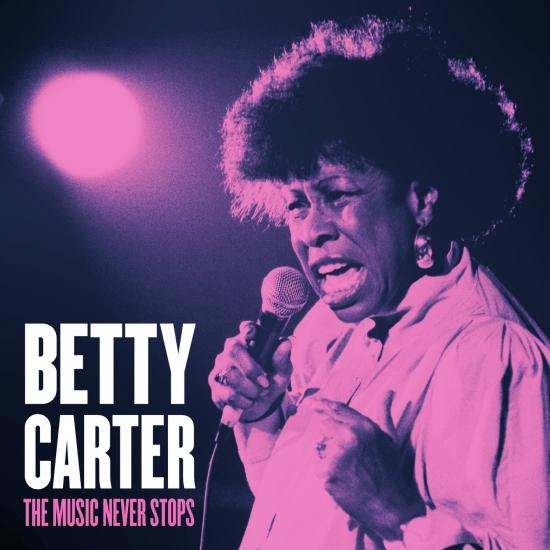 Blue Engine Records announces the release of some of the earliest material ever recorded by Jazz at Lincoln Center–jazz trailblazer and vocalist Betty Carter’s The Music Never Stops. This live performance at New York’s Aaron Davis Hall was recorded in 1992, six years before Carter’s untimely passing and during the early days of Jazz at Lincoln Center. The Music Never Stops marks Carter’s first posthumous album as well as the artist’s first release composed entirely of previously unheard material in 22 years (the last being “I’m Yours, You’re Mine” in 1997). The first single from The Music Never Stops,“Tight! / Mr. Gentleman,” is available for streaming and download on all mass-market digital platforms on Friday, February 1. Betty Carter’s The Music Never Stops will be released, 27 years to the date of the historic performance.
The long-running debate over what defines a jazz singer simply dissolves when Betty Carter’s name comes up. She transcended the entire category and took her place in the music pantheon as one of jazz’s most profound and game-changing innovators. Her impact was pervasive: not only did she influence a wide range of artists with her music, but the “University of Betty Carter” stands alongside Art Blakey’s Jazz Messengers as one of the jazz world’s elite finishing schools, training many of today’s most acclaimed jazz artists.
Carter challenged herself throughout her entire career, but the concert captured on The Music Never Stops represents perhaps the pinnacle of her musical ambitions. Harnessing a full jazz orchestra, a string section, and three distinct piano trios, Carter delivered a stunning tour-de-force performance that until now only lived in the memories of the enthralled and highly responsive audience members who were fortunate enough to have been there.
The orchestra Carter enlisted include such stalwarts as Robin Eubanks, Art Baron, Jerry Dodgion, Alex Foster, and Lew Soloff. Pianists John Hicks, Geri Allen, and Cyrus Chestnut; bassists Lisle Atkinson and Ariel Roland; and drummers Kenny Washington, Greg Hutchinson, and Clarence Pennfilled out the three swinging rhythm sections. Many of the participants were Carter’s former students, and all of the rhythm section players were members of her various trios.
Carter’s magnificent performance was a massive and ambitious undertaking. The Music Never Stops proved to be an apt title, as over the course of two hours it never did. She darted back and forth between the different ensembles, transitioning seamlessly and effortlessly between burning bebop and deeply felt ballads, wearing out the musicians with her stamina. The album highlights the legendary Carter’s many talents: mesmerizing balladry, exhilarating swing, impeccable lyricism, stunning improvisation, and her unparalleled ability to build both a narrative and a mood by spontaneously weaving jazz standards and her own genius material together. For example, a 16-minute medley of what Carter calls “question songs”—“Why Him?”, “Where or When”, and “What’s New?”—takes three seemingly disparate standards and crafts a seamless, epic narrative of love found, lost, and (maybe) found again. Carter’s originals like “30 Years” and “Make Him Believe” offer up inventive and unsparing treatments of modern love, challenging gender norms and constructing narrative tapestries in a way that’s still visionary today.
Betty Carter, vocals
Alex Foster, tenor saxophone (on Ms. B.C.)
Lou Marini, tenor saxophone (on Social Call)
Kamau Adilifu, trumpet (on Ms. B.C.)
Cyrus Chestnut, piano
Geri Allen, piano (on If I Should Lose You)
Ariel Roland, bass
Greg Hutchinson, drums
Clarence Penn, drums (on The Good Life; Bridges; Most Gentlemen Don’t Like Love)
Digitally remastered 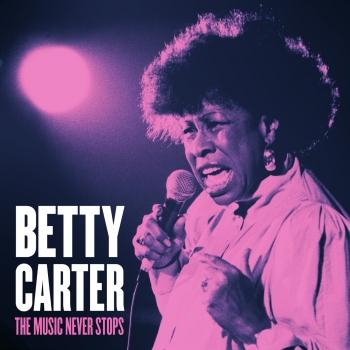 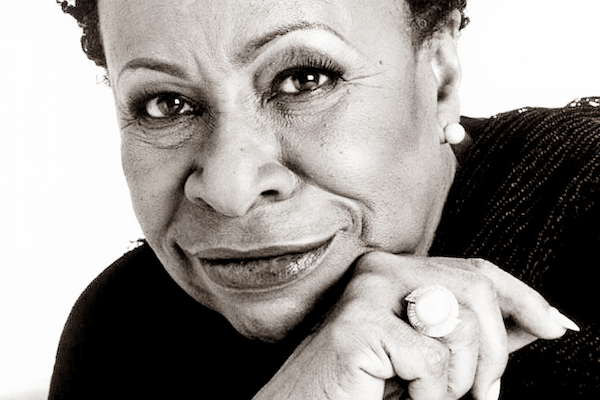 Betty Carter
Carmen Rae and Sarah Vaughan called her the greatest pure jazz singer - not a trifle for leading ladies in jazz who knew what they were talking about. Lillie Mae Jones, born on May 16, 1930 in Flint, Michigan, was a bebop fanatic who won an amateur contest at the Paradise Theater in Detroit at sixteen. She gigged with Dizzie Gillespie’s Big Band and Charlie Parker before hitting the road with Lionel Hampton, who dubbed her “Betty Bebop” and had the privilege of firing and re-hiring the fiery prodigy seven times in two-and-a-half years. ”... I was around a lot of jazz musicians in my early career. So it’s in my blood...” confirmed Carter years later. On her own as a club singer in the 50’s, she paired up with Ray Charles in 1960; their unforgettable Baby It’s Cold Outside was a hit. The decade, however, was not an easy period for jazz. Recording companies wanted to make quick money and the money was in pop. But Betty Carter was not one to conform to any trend. In 1969 she founded her own label, Bet-Car, which, though shaky, allowed her to learn about self-marketing and do things her way. “That’s what jazz is all about. It’s improvising... changing things around... doing something different with a piece of music... It’s [jazz] not going anywhere unless we get some new ideas. We’ve got to market the music in a different way.”
Betty Carter got her way. Polygram Records (Verve label) offered her a major contract in 1988. Great American Music Hall Records issued a live duet session with Carmen McRae, which won a Grammy nomination. At age 59, after over 40 years of refusing to cop out, the Grammy Award she did receive for Look What I Got!
On January 10, 1992, The American Jazz Masters helped Betty make a dream come true by awarding her and two other jazz artists one-time-only fellowships of $20,000 each. Betty Carter Big Band With Strings: The Music Never Stops was born: a ninety-minute, non-stop performance with her trio, two guest trios, six strings, and a seventeen-piece band. “That’s a challenge to me,” she said, “... because I have to continuously move and sing for about 90 minutes ... it’s never been done before in this manner. Yes, I take risks and this is certainly one.” In April 1992 she was one of the Jazz Education Hall of Fame winners (along with Dizzie Gillespie and J. Richard Dunscomb) for their “contributions and dedication to jazz education over the past 25 years.”
A one-woman jazz university she is indeed, scouting around for promising young talents and rounding them up for an unbelievable musical education in the form of Jazz Ahead, whose major goals are not only to showcase emerging jazz talents, but above all to foster a genuine appreciation for jazz in young African-Americans. The week of composing and arranging is capped off by a weekend of concerts. “It’s not just about music,” says trumpeter Riley Mullins, “it’s about spiritual unity and love.” Betty maintains that “...if you want to stick your neck out and find out something about yourself, you have to think...when you think differently, you say differently.”
And that, exactly, is what Betty Carter does. Said Howard Reich of the Chicago Tribune, “...for sheer inventiveness, imagination and ability to make a song into a living drama, Carter probably has no peer.” Anyone who has witnessed a performance by Betty Carter can vouch for that.