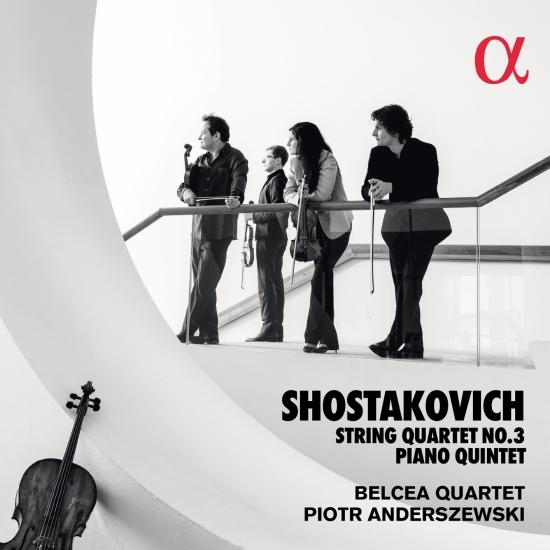 Formed in 1994 at the Royal College of Music in London, the Belcea Quartet has recorded the complete string quartets of Beethoven, Brahms, Bartók and Britten. For this new Alpha release it has chosen two works by one of the leading composers of twentieth-century chamber music, Dmitri Shostakovich. The Quartet no.3, of historic importance, was initially censured by the Soviet regime, then revised by Shostakovich for its first performance in 1946; the refined playing of the Belcea Quartet brings out all its contours. The Piano Quintet is among its composer’s most famous works and significantly contributed to his success on the international scene and with the Soviet authorities. The Belcea Quartet performs it in the company of the Polish pianist Piotr Anderszewski: the result is a musical encounter at the highest level of excellence.
Belcea Quartet
Piotr Anderszewski, piano 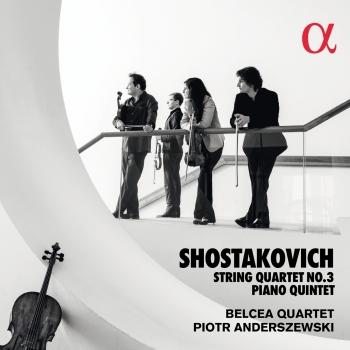 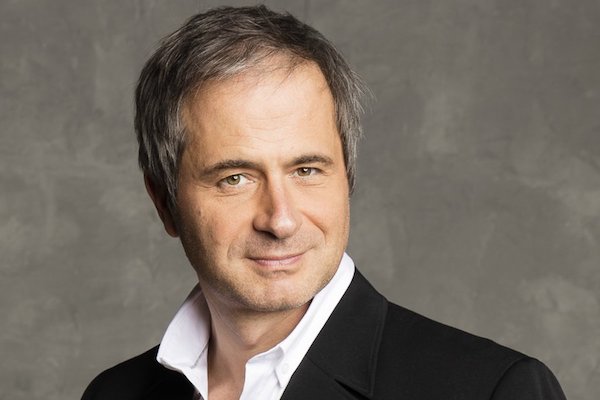 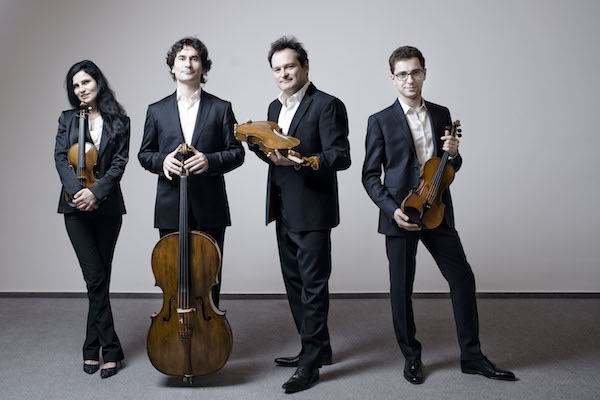 Belcea Quartet
What the Belcea Quartet writes in the preface to its recording of the complete Beethoven String Quartets could also be described as their artistic creed. These musicians are not confined by traditional boundaries. It is perhaps the very fact of their diverse cultural backgrounds that is behind their dynamic and free interpretative style. Founded at the Royal College of Music in London in 1994, the quartet is based in Great Britain. However, the Romanian violinist Corina Belcea and the Polish violist Krzysztof Chorzelski, the two founder members, bring a very different artistic provenance to the ensemble while drawing from the best traditions of string quartet playing received from the quartet's mentors: the members of the Alban Berg and Amadeus Quartets. This spectrum is extended by the French musicians Axel Schacher (violin) and Antoine Lederlin (violoncello). The Belcea Quartet blends its diverse influences into a common musical language.
This diversity is reflected in the Belcea Quartet's repertoire. Regular world premieres - among them Mark-Anthony Turnage's string quartets „Twisted Blues with Twisted Ballad“ in 2010, „Contusion“ in 2014, Thomas Larcher’s „lucid dreams“ in 2015, as well as Krzysztof Penderecki’s 4th string quartet in 2016, go hand-in-hand with its profound connection with the great works of the Classical and Romantic periods. The quartet's open-minded approach to music invariably enables it to find its own unique, elegant and refined interpretations of the main string quartet repertoire. The quartet’s regular partners include Piotr Anderszewski, Till Fellner, Valentin Erben and Antoine Tamestit.
From this season on, the Belcea Quartet is the Quartet Artist-in-Residence at the new Pierre Boulez Saal Berlin. The quartet has shared a residence at the Wiener Konzerthaus with the Artemis Quartet since 2010. The musicians recently created their very own Belcea Quartet Trust, whose main aims are to support and inspire young string quartets through series of intensive coaching sessions organized according to the needs of each selected ensemble, as well as to support commissioning of new works from today's leading composers to be premiered by the quartet in the future.
The Belcea Quartet has an impressive discography. During its long-term association with EMI Classics, the quartet recorded the complete Britten and Bartók quartets as well as works by Schubert, Brahms, Mozart, Debussy, Ravel and Dutilleux, amongst others. In 2012 and 2013, the quartet recorded the complete Beethoven quartets live in the Benjamin Britten Studio in Snape. This recording was released under ZigZag Territories, the quartet’s new label. As with its predecessors, this CD has been met with critical acclaim: it has been recognized with such prizes as the ECHO Klassik Award. In 2015, the quartet released its highly acclaimed recording of works by Webern, Berg and Schoenberg to coincide with its 20th jubilee. September 2016 saw the release of the quartet’s recording of the complete Brahms string quartets & piano quintet, a CD acclaimed by the press and awarded with an Echo Classic as well as a Diapason d’or of the year 2016.
The Belcea Quartet's performances of the complete Beethoven string quartets at Vienna's Konzerthaus in 2012 were broadcast by Mezzo TV and were released - on DVD and Blue Ray disk - by the label Euroarts in fall 2014. The release was accompanied by Jean-Claude Mocik's documentary of the entire project, "Looking for Beethoven".
In 2017/2018, the quartet will perform in such venues as London’s Wigmore Hall, the Kölner Philharmonie, the Muziekgebouw Amsterdam, the Lotte Hall in Seoul, the Philharmonie de Paris and the Pierre Boulez Saal Berlin for three concerts. The music of the 21st century will feature prominently in their 2018/2019 programs: the centerpiece will be the world premiere of a new string quartet by Joseph Phibbs.
Piotr Anderszewski
is regarded as one of the outstanding musicians of his generation.
He has regularly given recitals at the Wiener Konzerthaus, Berliner Philharmonie, Carnegie Hall New York and the Concertgebouw Amsterdam. His collaborations with orchestra have included appearances with the Berlin Philharmonic and Berlin Staatskapelle orchestras, the Philharmonia and London Symphony orchestras, the NHK Orchestra and the Orchestra de Paris. He has also placed special emphasis on playing and directing, working with orchestras such as the Scottish Chamber Orchestra, Chamber Orchestra of Europe and Camerata Salzburg.
In the 2017-18 season Anderszewski will appear with the Vienna Philharmonic Orchestra, the Budapest Festival Orchestra and the Orchestra de Paris. In recital he can be heard at Chicago's Symphony Centre, the Concertgebouw in Amsterdam and at the Barbican Centre in London. In spring 2018 he will resume his play-direct collaboration with the Scottish Chamber Orchestra for an extensive European tour.
Piotr Anderszewski has been an exclusive artist with Warner Classics/Erato (previously Virgin Classics) since 2000. His first recording for the label was Beethoven's Diabelli Variations, which went on to receive a number of prizes. He has also recorded Grammy-nominated discs of Bach's Partitas 1, 3 and 6 and Szymanowskis solo piano works, the latter also receiving a Gramophone award in 2006. His recording devoted to works by Robert Schumann received the BBC Music Magazines Recording of the Year award in 2012. Anderszewski's disc of Bach's English Suites nos. 1, 3 and 5, released in November 2014, went on to win both a Gramophone award and an ECHO Klassik award in 2015. His most recent recording of two late Mozart concertos with the Chamber Orchestra of Europe was released in January 2018.
Recognised for the intensity and originality of his interpretations, Piotr Anderszewski has been a recipient of the Gilmore award, the Szymanowski Prize and a Royal Philharmonic Society award.
He has also been the subject of several documentaries by the film maker Bruno Monsaingeon. Piotr Anderszewski plays the Diabelli Variations (2001) explores Anderszewski's particular relationship with Beethoven's iconic work, whilst Unquiet Traveller (2008) is an unusual artist portrait, capturing Anderszewski's reflections on music, performance and his Polish-Hungarian roots.