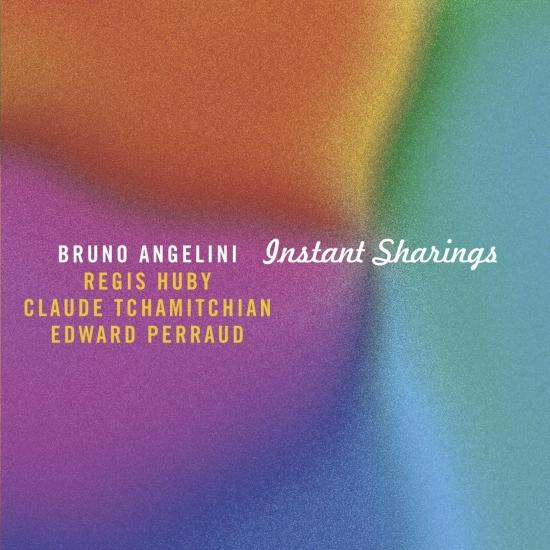 „Instant Sharings“, basically THIS is what matters! Music starts and then you have to broadcast, listen, share, make quick decisions... with, for, in close relation with the others, so as to turn this four person adventure into one. This is perfectly embodied by marvelous musicians whose personal music route is paved with multiple, innovative collaborations. Each member brings his own experience, a part of himself, his own creative world, to achieve the project.
The repertoire consists mainly of original compositions along with some pieces by iconic musicians such as Paul Motian, Wayne Shorter and Steve Swallow.
They all share strong melodic characteristics, enhancing the work on tone, dynamic range, space and meaning.
„Instant Sharings“, a band, a sound, a project, a disc, a unique adventure.
Bruno Angelini, piano
Régis Huby, violin, violin tenor, electronics)
Claude Tchamitchian, double bass
Edward Perraud, drums, percussion 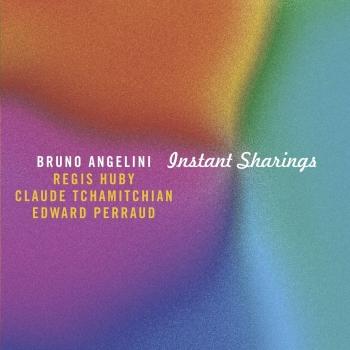 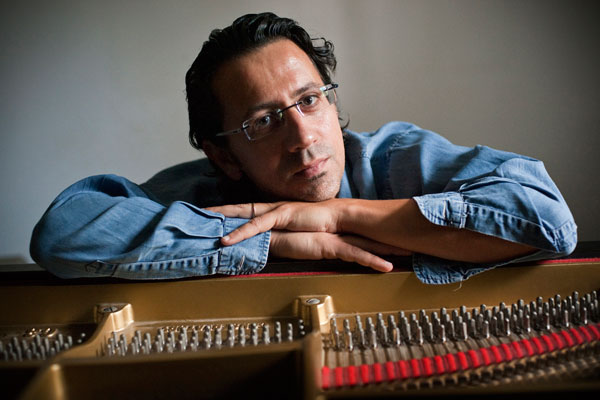 Bruno Angelini
was born in Marseille in 1965. At the age of six, Bruno studies classical piano at the Aulnay sous Bois Music Conservatory for nine years, before devoting himself solely to jazz. Initially focusing on guitar and then saxophone, he returns to the piano on a permanent basis and attends the classes of Guy Longnon at the Marseille Jazz Conservatory.
In 1989, Bruno reverts to his classical roots, initially delving into Debussy, Bartok, and Messian, and subsequently enrolls in the practical improvisation courses at the Centre d’Information Musicale(CIM)under the aegis of Sammy Abenaim.
During that time, he plays in many orchestras and becomes the recipient of special awards such as the "Prix Special de la Défense 1995" and the Cannes 1996 Competition. Bruno makes a name for himself in many a Parisian jazz club, the New Morning, the Sunset, the Duc des Lombards, to name but a few. He participates in festivals such as Nice, Marciac, Coutances and Colmar) and travels extensively throughout Western Europe and Africa.
In 2000, he joins the Thiery Peala project "Innertraces" both in live performances and recordings for the Naïve label, along with Kenny Wheeler. Bruno also lends his talents to Moira Conrath’s "Insomnie" project, involving musicians from Mali.
In 2001, Bruno records "Waiting for You" for the Cristal record label, as part of the Xavier Cobo Quartet.
"Empreintes" is issued in 2003, with Riccardo del Fra and Ichiro Inoe, for the Sketch label. It is Bruno’s first CD as leader and is entirely made up of original compositions.
In 2004, as part of a special project for the Châtelet Theater in Paris under the aegis of Gérard Lesne, Bruno arranges and interprets jazz standards in his own style. The other musicians involved with this undertaking are Jean-Philippe Viret and Ramon Lopez.
That same year, he participates in the creation of a repertoire for Thiery Peala’s New Edge Trio, with Sylvain Beuf. A CD recorded in 2006 is due to be released this year on the Cristal label.
He also plays in duo format with Jean-Luc Cappozzo.
2005 sees Bruno’s involvement in a fully improvised music project, along with Joe Fonda and Ramon Lopez. A CD release entitled "Silent Cascades" is planned by the German Konnex label, and a European tour is to take place at the end of 2006 or early 2007.
Bruno also plays with the European Jazz Ensemble headed by trumpeter Gioavanni Falzone. A CD is due due for release by the Italian record label Soul Note in September 2006. It also features Robin Verheyen, Mauro Gargano and Luc Isenmann.
Bruno has recently performed in Turkey with the "Spiral Quartet" headed by saxophonist Philippe Poussard, along with Francois Delacoudre and Christian Lete.
A solo album is planned for release by the Minium label at the end of August 2006, as part of the "Standards Visit" series.
October 2006 will see the performance of a new work by Ramon Lopez that will feature the composer, Bruno, Claude Tchamitchian and Bruno Wilhem. The orchestra will be augmented by two Basque choirs.
Bruno Angelini has been teaching jazz piano at the Bill Evans Piano Academy, in Paris, since 1996.