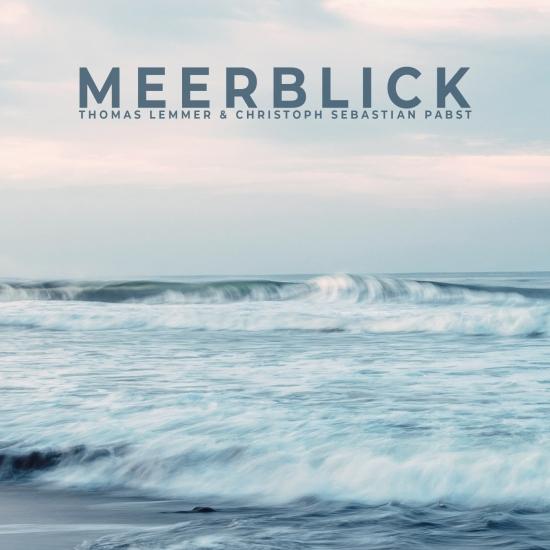 After the great success of the two short albums (EPs) Meeresleuchten (translated: marine phosphorescence) and Tiefblauhorizont (translated: deep blue horizon), it was time for the first album of Thomas Lemmer & Christoph Sebastian Pabst. As the completion of a series of marine inspirations, the name couldn’t be more fitting: Meerblick (translated: sea view)!
In addition to the familiar songs from the EPs, there will be new tracks with a love of detail, beautiful sounds and new elements. The impressive complete works of the two artists comprise 16 titles. Varied, creative and in love with detail, the two work on the theme of the sea.
The song Gezeitenkräfte (translated: tidal forces) lets the power of the sea be heard deep inside with deep synthesizer pads, wide spheres, mysterious melodies and floating piano elements.
In Surfwellensommer (translated: surf wave summer) the beautiful sound of a hang drum was used as a basic element for the first time. Driving rhythms with supporting synthesizer melodies and spherical elements create a warm atmosphere that leads you safely through a glowing wave tunnel.
With the well-known instrument of the Chinese vaulted zither, the guzheng, Belugakliff (translated: beluga cliff) generates a slowly building carpet of sound accompanied by the sound of the sea, which with the addition of beautiful piano elements is able to create a wonderfully free and peaceful feeling.
Since the sea, with its balanced habitat, is increasingly threatened by man, a thought-provoking song was not to be missed on the album Meerblick, which addresses a current and for the future very important topic with Plastikfluten (translated: plastic floods).
To preserve the mysterious world and beauty of the oceans, we all need to reflect on ourselves and our consumption. The song Plastikfluten is not supposed to remind us with a raised index finger, but to sensitize us with a deep feeling and connection to the sea and to show us what effects our lifestyle can have on these wonderful habitats.
With “Meerblick” Thomas Lemmer & Christoph Sebastian Pabst have created a beautiful and intense album. Perfect for letting yourself fall into the music and drift away.

Thomas Lemmer
has been writing and producing music for many years. At present he works on several music production projects, as well as with different bands.
With diPOLAR, a German pop duo, Thomas Lemmer won the German Rock & Pop Award in Hamburg 2005.
In 2009, Thomas Lemmer released his first solo album Chillout Lounge. The album was a major success in the chillout, lounge, and downtempo scenes. Many tracks from this album can be found today on dozens of successful and international compilations.
His track Fatigué features on the world famous Café del Mar – Vol. XVI compilation, where It became #1 in Spain, and entered the top 10 in many other countries.
In 2010 he started the Motif project with Aaron Taylor from England. Their music spans across the Downtempo, Electronica and Trip-Hop genres. Their first ever production Give It Away, features on the infamous Café Del Mar label, for their landmark ‘30 Years of Music’ compilation. They are currently working extremely hard on their first artist album.
In 2011 Thomas released his second studio album RELIEVE and proves again, that he produces chill out music on the highest level. 17 tracks transport you into a unique, free and relaxing world of sounds which let you slip into an absolute free and relaxed world.
In 2013 Thomas joined one of the major and most prestigious labels in the chillout and downtempo scene: SINE MUSIC.
After almost 2 years of hard work, Thomas released his next album STILL in October 2013. “Be still, relieve”, the key message of this album is not just a quotation from a song of the album, but also stands for Thomas’s music. Again he developed his music further which spans from classical elements to pure electronic. The album contains six vocal tracks, sung by the touching and beautiful voices of Naemi Joy and Sabrina Vieweber. High profile remixers are currently working on several tracks for an upcoming REMIX EDITION and singles.