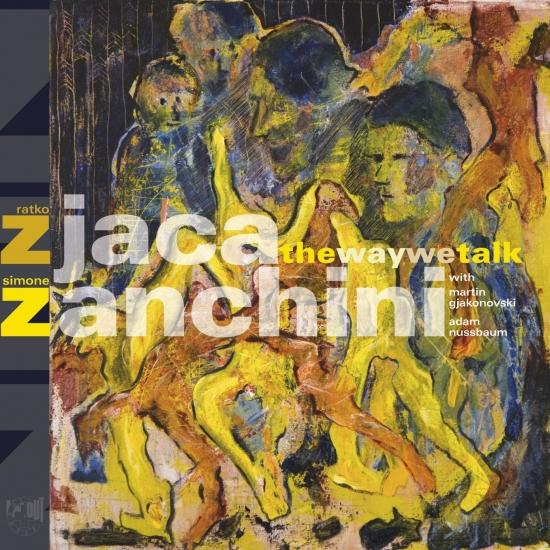 Info for The Way We Talk

They talk to each other – and also to their audience. It’s a very special vocabulary, a new form of multilingual communication in which European music culture and the history of swinging America are linked. A mixture of past and present, of classical music and improvisation, of folklore and innovation. If you check out the line-up of Ratko Zjaca’s and Simone Zanchini’s quartet, you will immediately notice how borders blur. Guitarist Zjaca stems from Croatia, accordionist Zanchini is Italian, Martin Gjakonovski, the bass player, is from Macedonia (although he now lives in Bergisch Gladbach, near Cologne) and drummer Adam Nussbaum is from the USA. A “task force” of aesthetic options that em- braces different races and continents. For Ratko Zjaca this is also a philosophy of life. It is the aim of this guitar wizard, the creator of this project, to bring together opposites and broaden horizons.
Four years ago he met Simone Zanchini and Adam Nuss- baum for the first time at a jazz workshop in Slovenia. “Teachers gave concerts there and they also had jam sessions,” Zjaca recalls. “We played together and created sounds that were really interesting and exciting.” A tour followed in 2009, then the four of them went into the Klangstudio Leyh, IN+OUT Records’ preferred recording studio, and recorded eleven original compositions by Zjaca and Zanchini.
“The fascinating thing about this production is that the music follows different directions and we all feel that we are discovering new elements all the time,” says Ratko Zjaca. “I’m very happy that this album came into being, because I believe we have something special to say and, in doing this, we have an authentic and fresh sound.” First and foremost, the band leaders form a diametrical unity. On the one hand there is the guitar player, grounded in contemporary jazz – Joe Pass, Jim Hall, Pat Metheny, Mick Goodrick, Mike Stern, Bob Brookmeyer and John Abercrombie all left their marks on his playing. On the other hand we have an accordion virtuoso with roots in folklore and also in classical and New Music. Both of them inspire each other in a synergetic way, mutually absorb their in uences and demonstrate their European gene code. “It definitely is a jazz album”, says Simone Zanchini. “but it is certainly not classic mainstream jazz. The word ‘jazz’ embraces such a tremendous range of music that the repertoire in the year 2010 cannot be the same as it was in 1940. The points of reference remain, of course, creativity and improvisation.” There is a photograph that shows Simone Zanchini with an accordion at the age of two. He says, “The instrument was always connected with our family. I always wanted to be a musician, not only an accordionist.” He named accordion pioneer Art van Damme, who passed away earlier this year, as “my guru”, colleague Frank Marocco as “a model“ and pianist Keith Jarrett as “my inspiration“. What links Simone Zanchini and Ratko Zjaca together apart from their joint love of acoustic adventures, is their fondness for movies, in particular the cinematic masterpieces of Federico Fellini. In an interview they each described sections of their début album as “Fellini-esque”. In this sense you could say that, with their ingenious hotchpotch, the quartet created “Fellini jazz”.
Ratko Zjaca, electric guitar, acoustic & bariton guitar, effects
Simone Zanchini, accordion, live electronics
Martin Gjakonovski, double bass
Adam Nussbaum, drums