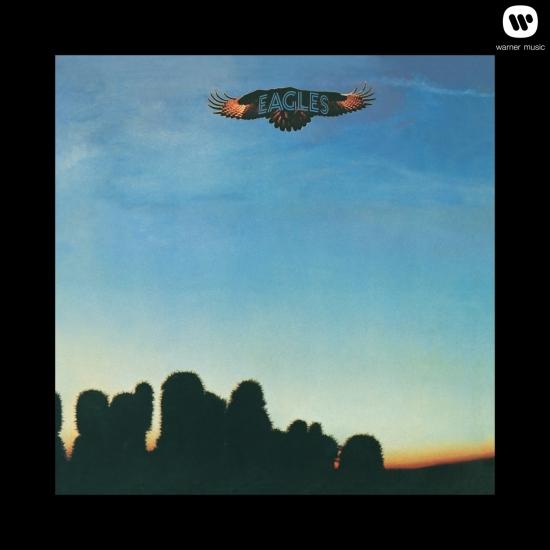 Eagles is the debut album by the rock band of the same name, released in 1972. The album was recorded at London's Olympic Studios with producer Glyn Johns. The album was an immediate success for the young band reaching #22 on the charts and going platinum. The album also released three Top 40 singles with 'Take it Easy', 'Witchy Woman' and 'Peaceful Easy Feeling'. The three singles reached #12, #9 and #22 respectively. The album played a major role in popularizing the southern California country rock sound.
In 2003, the album was ranked number 374 on Rolling Stone magazine's list of the 500 greatest albums of all time. The single 'Take It Easy' is part of the Rock and Roll Hall Of Fame '500 Songs That Shaped Rock and Roll'. This album was slated for Quadraphonic release and even given a Quadraphonic catalog number but it was never released in the format. In the documentary, History Of The Eagles, Glenn Frey revealed that the band were all on peyote when the pictures for the album cover were shot in Joshua Tree National Park.
Allmusic's William Ruhlmann sums up the album as balanced, and notes that the three hit singles were penned by Frey and Henley who would later go on to dominate the band. (Many people overlooked Jack Tempchin as the author of 'Peaceful Easy Feeling'). Rolling Stone listed it as number 374 on their '500 Greatest Albums' with the comment that the album 'created a new template for laid-back L.A. country-rock style'. It was included in Robert Dimery's 1001 Albums You Must Hear Before You Die.
'...they'll stand proudly right next to the best recordings of the Byrds, Buffalo Springfield, Burrito Brothers, and the other premier Los Angeles groups...'. (Rolling Stone)
Glenn Frey, vocals, guitar, keyboards
Don Henley, vocals, drums
Don Felder, guitar, organ
David Sanborn, alto saxophone
Bernie Leadon, vocals, guitar, steel guitar, banjo
Randy Meisner, bass
Digitally remastered