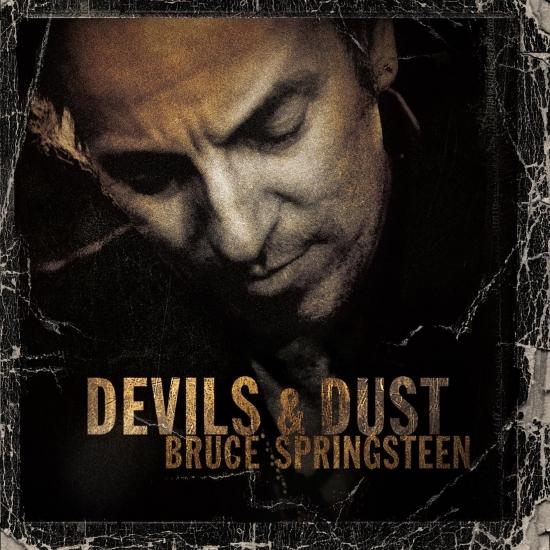 Bruce Springsteen's nineteenth album, Devils & Dust, features twelve brand-new Springsteen songs. and was produced by Brendan O'Brien, who first worked with Springsteen on the acclaimed album, The Rising. The seeds for the new album were sown nearly a decade ago, when the singer-songwriter launched his first-ever solo acoustic tour (1995--96). Two of the new album's songs, 'The Hitter' and 'Long Time Comin',' were actually written and performed on The Ghost of Tom Joad tour. But not all the material dates back that far; the title track was written around the start of the war in Iraq, Springsteen said. 'It works as a metaphor for all the music underneath it, the individual stories of people wrestling with their demons,' he said of the title track. Springsteen opted to record without the E Street Band for Devils & Dust. The core group was Springsteen on guitar and other instruments, producer Brendan O'Brien on bass and drummer Steve Jordan. In keeping with his pattern of recording, the new album is a quieter, more acoustic affair than The Rising. Springsteen, now 55, has alternated between large-scale rock records followed by more introspective material since 1982's Nebraska was released two years after The River. Pedal steel guitar, harmonica and violin fill in the sparse, rootsy arrangements. The bonus DVD includes a special Devils & Dust film by noted photographer and film maker Danny Clinch, including rare, never-before-seen acoustic performances of 'Devils & Dust,' 'Long Time Comin',' 'Reno,' All I'm Thinkin' About' and 'Matamoras Banks' plus Bruce's personal introductions to the tracks.
„Every decade or so, Bruce Springsteen releases a somber album of narrative songs, character sketches, and folk tunes -- records that play not like rock & roll, but rather as a collection of short stories. Nebraska, released in the fall of 1982 during the rise of Reagan's America, was the first of these, with the brooding The Ghost of Tom Joad following in 1995, in the thick of the Clinton administration but before the heady boom days of the late '90s. At the midpoint of George W. Bush's administration, Springsteen released Devils & Dust, another collection of story songs that would seem on the surface to be a companion to Nebraska and Ghost, but in actuality is quite a different record than either. While the characters that roam through Devils & Dust are similarly heartbroken, desperate, and downtrodden, they're far removed from the criminals and renegades of Nebraska, and the album doesn't have the political immediacy of Ghost's latter-day Woody Guthrie-styled tales -- themes that tied together those two albums. Here, the songs and stories are loosely connected. Several are set in the West, some are despairing, some have signs of hope, a couple are even sweet and light. Springsteen's writing is similarly varied, occasionally hearkening back to the spare, dusty prose of Nebraska, but often it's densely composed, assured, and evocative, written as if the songs were meant to be read aloud, not sung. But the key to Devils & Dust, and why it's his strongest record in a long time, is that the music is as vivid and varied as the words. Unlike the meditative, monochromatic The Ghost of Tom Joad, this has different shades of color, so somber epics like 'The Hitter' or the sad, lonely 'Reno' are balanced by the lighter 'Long Time Comin',' 'Maria's Bed,' and 'All I'm Thinkin' About,' while the moodier 'Black Cowboys' and 'Devils & Dust' are enhanced by subtly cinematic productions. It results in a record that's far removed in feel from the stark, haunting Nebraska, but on a song-for-song level, it's nearly as strong, since its stories linger in the imagination as long as the ones from that 1982 masterpiece (and they stick around longer than those from Ghost, as well).“ (Stephen Thomas Erlewine, AMG)
Bruce Springsteen, vocals, guitar, keyboards, bass, drums, harmonica, tambourine, percussion
Brendan O'Brien, hurdy-gurdy, sarangi, sitar, bass guitar, tambora
Steve Jordan, drums
Marty Rifkin, steel guitar
Chuck Plotkin, piano
Danny Federici, keyboards
Nashville String Machine, strings
Soozie Tyrell, violin, backing vocals
Brice Andrus, horns
Susan Welty, horns
Thomas Witte, horns
Donald Strand, horns
Mark Pender, trumpet
Patti Scialfa, backing vocals
Lisa Lowell, backing vocals
Produced by Brendan O'Brien
Digitally remastered
Please Note: We offer this album in its native sampling rate of 44.1 kHz, 24-bit. The provided 96 kHz version was up-sampled and offers no audible value!